Day 92- The One With Lehigh Gap 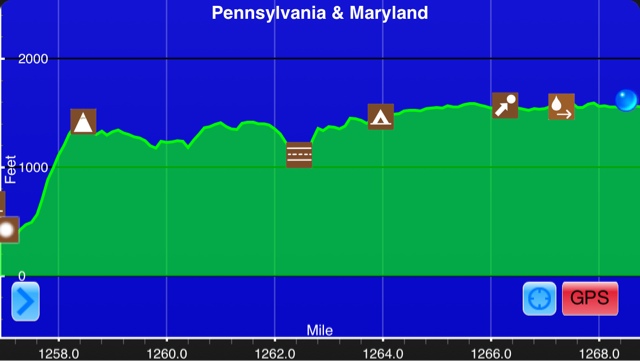 Well, I said yesterday that today would be action packed, and boy was it ever. I tried to sleep in this morning, "tried" being the keyword. I was up at my usual time of 6:00. I used the early morning, kid free time, to start writing yesterday's blog. I was just too tired to do it last night. I got out of bed at 7:00 and had breakfast with, Boo Boo, Red, and 5-0(Mikes's trail name). We had leftover pork roll sandwiches that he added fried egg to, they were delicious. I also had a nectarine, which I have decided is my new favorite fruit(sorry banana), and a Mt. Dew. I love being able to eat and drink whatever I want.
I got my things repacked and the girls tried to help. If helping involved running around and bouncing on the bed where all of my stuff was. Red had a karate lesson, so I went along to watch. Little kids learning karate is pretty darn cute. Before we could head back to the trail a stop by WaWa for coffee and trail snacks was in order. 5-0 even made a stop by McDonald's for us. It was a great morning and I enjoyed spending more time with the girls.
When we arrived at the Lehigh Gap parking area we came across three hikers passing by. I flagged them down so they could enjoy some trail magic. Lean To, Forever, and Sam I Am, introduced themselves to Boo Boo, Red, and 5-0. They ate a good amount of food even though they had just ate in town. Shortly after, Mechanic Mike(a trail maintainer) and his dog Guinness, stopped by. Happy(who I met a few days ago) and his wife came by next. It was really great to have so many hikers today since yesterday was kind of a bust. Once everybody had ate their fill it was time to head out. Forever, Lean To, and Sam I Am, started back on the trail first. I said goodbye to the family and started towards the trail. Boo Boo and Red decided they wanted to walk up the trail with me a little ways, so 5-0 followed. It was hard saying goodbye, but the section of trail I had ahead of me was no place for small children. Lehigh Gap is the 4th hardest section of trail along the entire AT. It is comprised of a 700 foot vertical boulder scramble that was more like rock climbing than hiking. I have done a few dangerous things in my life, but this was the first time that I felt I could actually die. One wrong step and I'd be dead. I got to a certain point and made the mistake of looking down, after that I was a nervous wreck. I got to a point where I could no longer go up and I couldn't go back down. I was starting to get pretty worked up when a couple high school aged kids with no packs came bounding up towards me. I explained that I couldn't move and they would have to go around. The young man worked his way around me and scrambled up a few feet above me. He offered to take my pack momentarily. I quickly agreed, without my pack on I could get up on the ledge above. After helping me, the couple quickly disappeared over the top ledge. I took a few minutes to calm myself and to take in the view. I could hear 5-0 whistling at me from below. 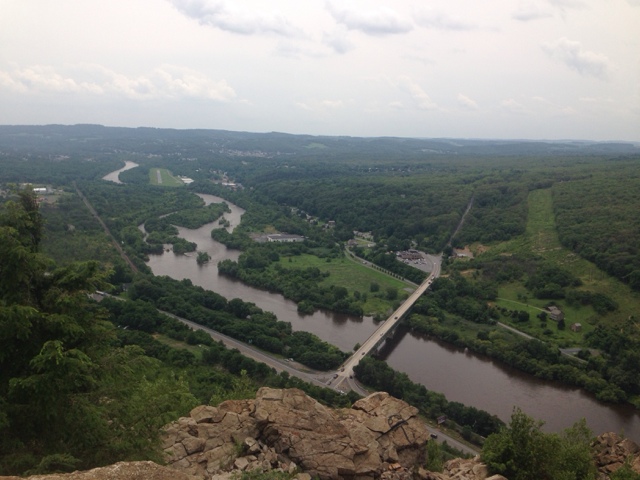 View from atop the mountain 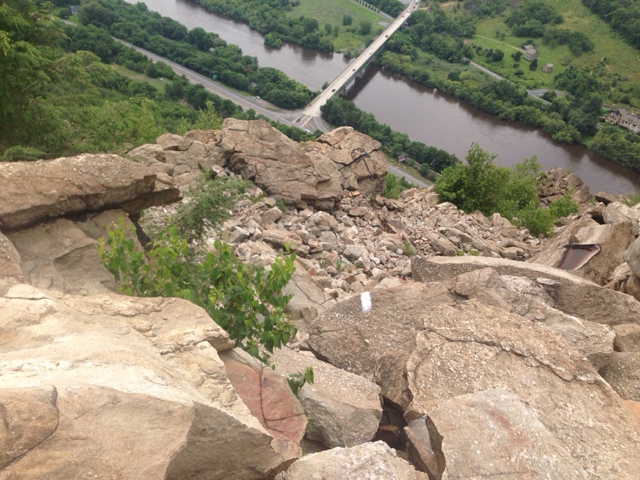 700 foot vertical scramble
Most of the hard part was over, but I still had to go over the very top. As I was trying to calm my fear and gather my courage, Happy, came into view. He was slack packing this section and was easily making short work of the boulders. He went up and over the top, then turned back and looked at me. He asked if I was ok and I told him I just needed a minute. He pointed out an easy route to take and suggested that I follow in his footsteps. It was all the help I needed. The trail cut across the side of the mountaintop at a steep angle. Thank god for, Happy, he kept talking to me, which kept my mind off of the danger. We cut across the mountain for almost half a mile. Eventually we came out into the cover of the forest, and my heart stopped racing. 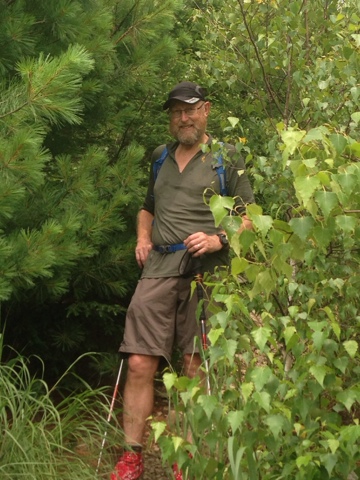 Cutting across the mountain
We hiked together for the next few hours. I'm not sure it was the best idea, but we filled our bellies with black raspberries and blueberries that we picked along the way. You see, this mountain is a National Superfund Site. Superfund Sites are polluted locations requiring a long-term response to clean up hazardous material contaminations. For nearly seventy years, the New Jersey Zinc company deposited nearly thirty-three million tons of slag on the site. The EPA finally stepped in and is overseeing the cleanup. We were told that if fruit is growing it is safe to eat, just don't drink the water because of it's heavy metal content. 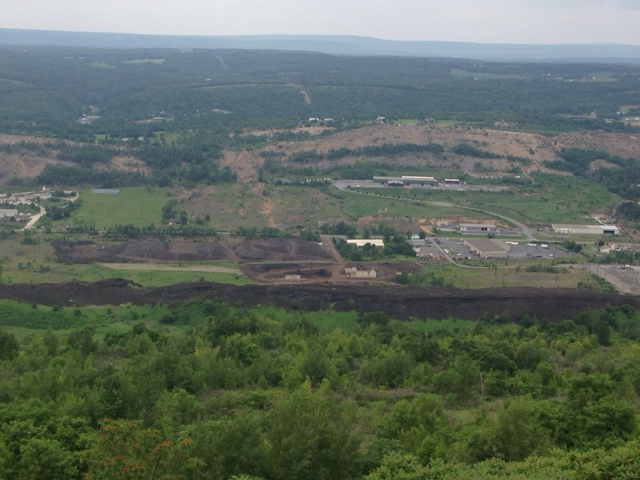 Remnants of the slag heap are still visable
As, Happy and I, came into a clearing we saw, Sam I Am, Forever, and Lean To taking a break next to a blueberry patch. We decided to take a much needed break as well. Right after we sat down, Whamo, Cruiser, and Gelato came by. I haven't seen them since Pine Grove, so it was nice to catch up. 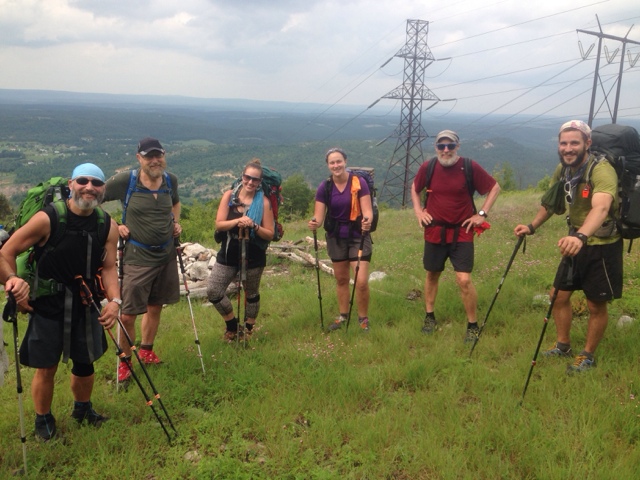 Sam I Am, Happy, Forever, Me, Cruiser, and Gelato
We all hiked together for the next few miles, it was a hiker trash train. Eventually we came down into, Little Gap, and everybody went their separate ways. Cruiser and Whamo, have thru-hiked the AT before. This time around they are slack packing with three other people. They break into two groups every morning. One group hikes south and the other north. They hike to their cars and meet up back in town, where they stay in a hotel every night. Sounds like a great way to hike to me. They are a really fun group and I look forward to flip flopping with them while they are in this area. Sam I Am, is heading to a cabin on a lake for the 4th of July to see his wife. Gelato continued on north, but was trying to hike another 11 miles to make it to the shelter. I'm not sure what happened to Forever, she was behind me and never went by my camp. Happy's wife flew all the way out here from New Zealand to hike with him for three weeks. She just started yesterday and Happy didn't want her to have to hike up Lehigh Gap. I can't imagine doing that on my second day of hiking. She shuttled ahead with Mechanic Mike and Guinness. I saw her again just before I setup camp. She was hiking southbound to meet back up with Happy. They are just lovely people and I hope to hike with them for a little while tomorrow.
I was so tired tonight, that after I set up camp, I ate a cold dinner, hung my bear bag and climbed into bed. There was a light rain, so I was glad that I decided to hang up my tarp. Since there was no rain in the forcast I hadn't planned on hanging it up tonight, but for some reason I changed my mind. I was hoping to get to bed early, but I have good cell phone reception and was catching up on my trail friends blogs and journals. I'm hoping for a high mileage day tomorrow, but will have to wait and see what the PA terrain brings me.
"“Brothers are like streetlights along the road, they don’t make distance any shorter but they light up the path and make the walk worthwhile.” -Unknown
Posted by Yoda at 8:40 PM