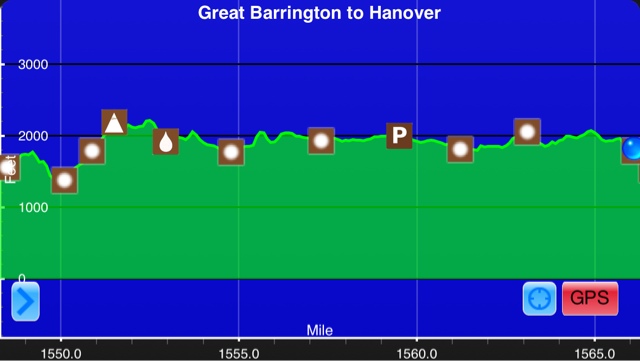 I forgot to take a picture of the cabin last night, but I got one before I left this morning. 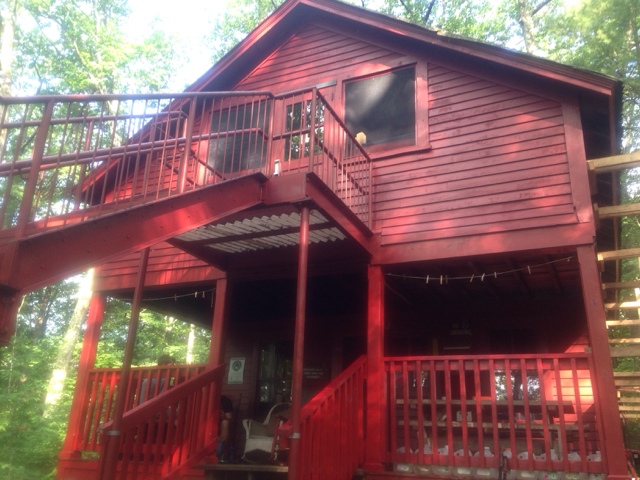 Upper Goose Pond Cabin
After breakfast, finishing my blog, and packing up my things, I didn't get on the trail until 9:00. I wasn't too concerned with the late start though. I had an easy 17 mile day planned and the terrain looked very easy. The early part of my hike was easy enough. I hiked out of the woods and crossed the Massachusetts Turnpike. 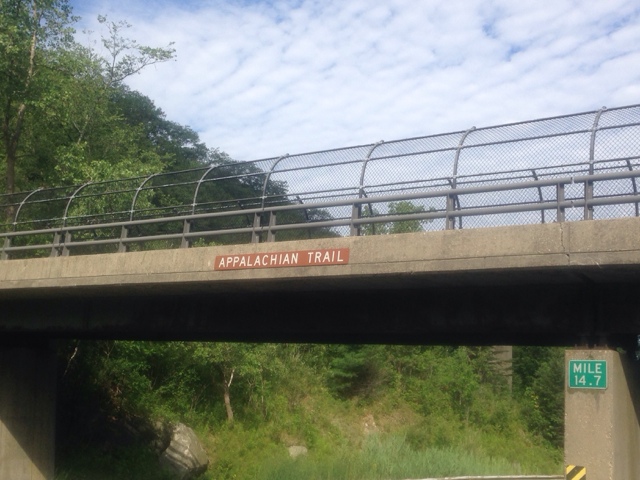 Trail over the Turnpike
Alas, the easy trail did not last long. Yesterday's rain had turned the trail into a treacherous, muddy mess. I slipped and slid across the trail for a few miles. After being so careful yesterday, I fell down twice today. Once, because I was going too fast and a slippery root was to blame. I fell again when, Rocky Mountain High, said hello from behind me. I turned around to look and slipped on a rock. Luckily, I wasn't hurt either time, but I was pretty irritated by the trail conditions. I was in a pretty foul mood for a few more miles. With such easy terrain I expected to bust out some quick miles, but the AT had other plans for me.
I eventually came across a beaver pond that looked like a nice place to stop and regroup. 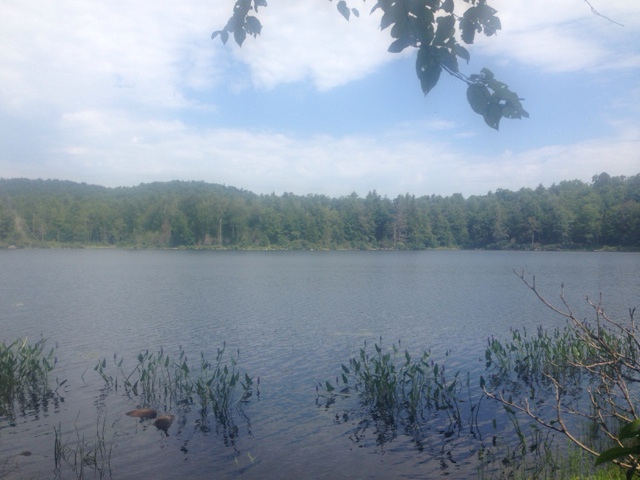 Good place for a brownie break
I checked my guidebook and was still making pretty good time considering the trail conditions were less than ideal. 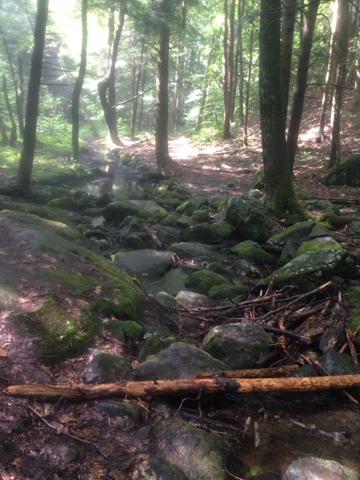 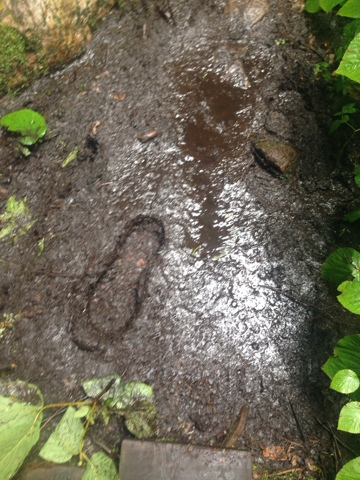 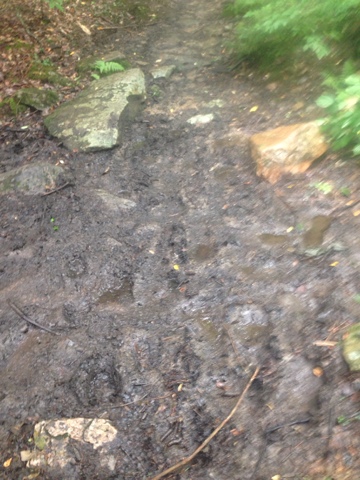 Example of my day
The really frustrating thing was the placement of the bog boards. Bog boards are used over muddy trail so we can stay out of the mud. Today, ninety percent of them were over completely dry sections of trail. 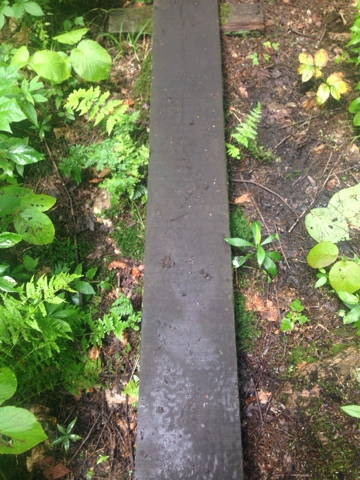 Odd placement
Eventually, I was able to shake off my frustration. A key component of this was my planned stop at "The Cookie Lady's" house. 100 yards off of the trail is a small blueberry farm. The owner, Cookie Lady, allows hikers to tent in her yard. She also brings out homemade cookies. I strolled in around 2:30 and saw a bunch of other hikers hanging out. 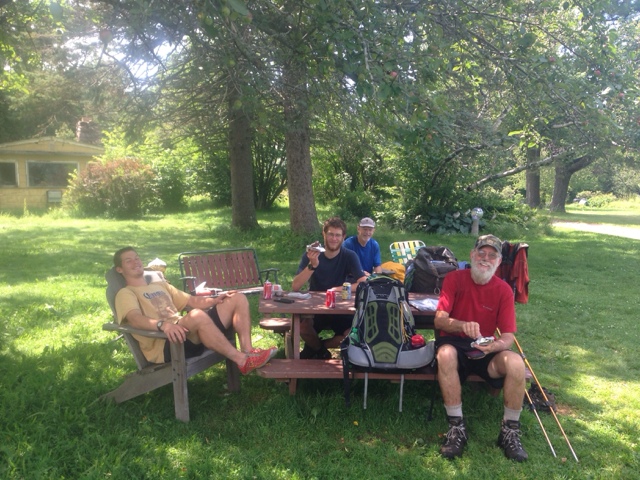 Flap Jack, Tunes, Shortbus, and B-Stinger
Cookie Lady, sells sodas, hard boiled eggs and blueberries from her farm, and Klondike bars. I had a lemonade, coke, Klondike bar, and three HB eggs. I was also able to dry out my socks, shoes, and feet. I spent way too much time relaxing there. 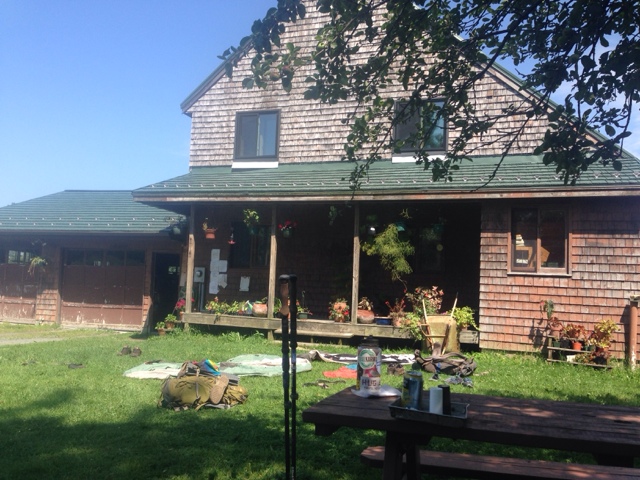 Cookie lady's house
The talk of the day was focused on a major storm that was supposed to come through tonight. It was projected to be very severe weather, with a good chance of hail. I should have spent less time hanging out at the Cookie Lady's, but I couldn't resist stopping there. I had almost seven miles to hike, but the weather looked ok when I left.
Within two miles of hiking I began to get nervous. The sky was rapidly getting dark, and I could hear thunder in the distance. I picked up the pace as much as I could without falling again. One mile later I knew I was in trouble. It was only 5:00, but the sky was almost completely dark. When I pulled up the weather on my phone I began to really hurry along the trail. I no longer cared about keeping my feet dry. In fact I started to run through the mud. I was four miles from the shelter when the rain first began. The thunder and lightening were getting closer by the minute. I ran whenever the trail allowed and speed walked the rest of the time. 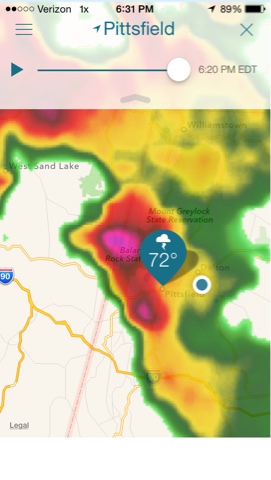 Not good
I don't think I have ever done 4 miles in an hour before. Today was a good time to break that record. I ran into the shelter just as the heavy rain began. I was lucky that it let up briefly and had time to set up my hammock before it really got bad. I still got wet, but my gear stayed dry. The shelter had a covered eating area, so I was able to cook and eat without getting wet. The storm lasted a few hours and it never did produce any hail. With a little more luck my tarp will be dry in the morning.
I'm on schedule with my plans for the rest of the week. Tomorrow, I pass through two different trail towns. I'll stop for breakfast in Dalton and then have lunch at Dunkin Donuts in Cheshire. It will be another lower mileage day as the next shelter is only 16.9 miles away. I should summit Mt. Greylock early Tuesday morning and nero into town afterwards. Wednesday, I'll finally take a zero!!! It has been way too long since I took one.
“If you think you are too small to make a difference, try sleeping with a mosquito.” -Dalai Lama XIV
Posted by Yoda at 7:08 PM