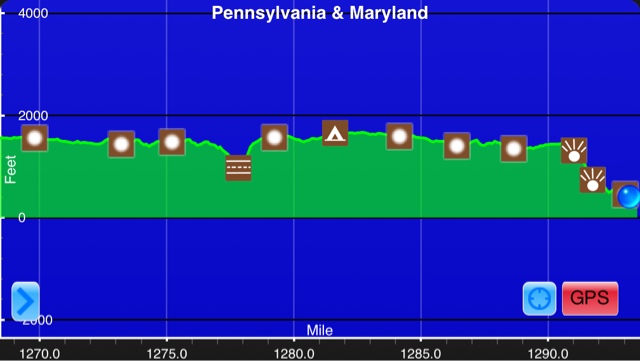 It's good to have goals. I woke up this morning very indecisive. Those of you who know me shouldn't be too surprised by this. My favorite holiday is the Fourth of July. My favorite sport is soccer. Well, the 4th is tomorrow and the World Cup Final is Sunday. I would like to be in town for both, but I don't want to take another zero day. That's where the decision comes into play. Ideally, I would nero into Delaware Water Gap tomorrow and enjoy the 4th there, then hike into another town Sunday for the game. The only problem is the next town is 29 miles away. I had to chose one or the other. Or did I? The one good thing about walking twelve hours per day is I have a lot of time to think things through. Today was a little on the boring side, so I thought of nothing else. My first plan was to hike through the 4th of July and make it to Branchville, NJ on Sunday in time for the game. My second plan was to spend the 4th in Delaware Water Gap(DWG) and go rafting with friends, then hike until two on Sunday. I could then call a shuttle and go to town for the game. This plan was getting expensive so I ruled it out almost immediately. Around two, I finally settled on getting as close to DWG as possible, then getting into town early and enjoying a few beers and hotdogs and then hiking out.
I guess I'm getting a little ahead of myself. Let me tell you about my day first.
I got a great nights sleep last night. The overnight temperatures lately have been great, it was in the upper 50's last night. I was up a little earlier than usual, 5:45. I got everything packed up pretty quickly and was on the trail by 6:45. The terrain was more of the same, jagged little rocks that stabbed my feet, mixed in with larger rocks that had me tripping like a drunk toddler. 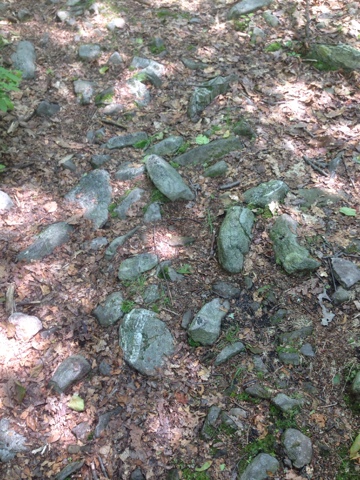 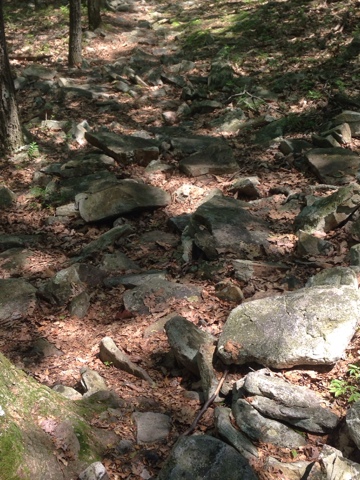 Larger, stumbling stones
This is how the trail was all day long. At least I only had a few small boulder fields to manage. Somehow I still managed to make good time. Usually this type of terrain slows me down a little because I'm constantly breaking my stride. I think today I just plowed through. The tough thing about the constant rocky terrain is that I can't look around. I have to keep my head down all day long. I could walk past a purple elephant, juggling penguins, and never notice it.
I hiked for a little while with, Old Eagle Scout(I told him hi for you Soda Pop and Skittles: He says Heyyyy), and Fly Away. It's nice to hike with other people for a little while during the day, it helps to break up the monotony. 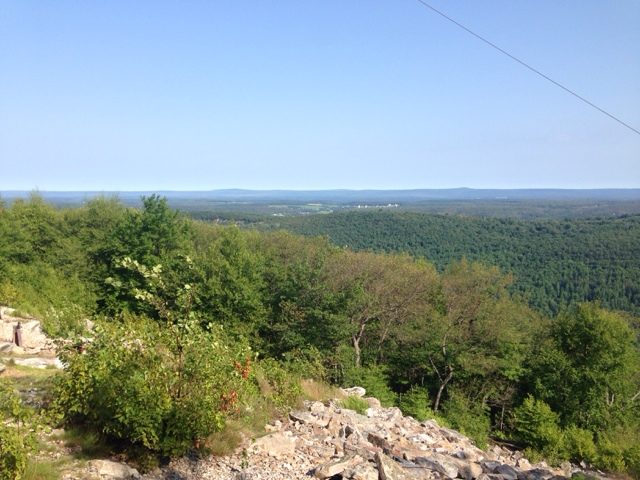 Early afternoon view
We stopped and ate lunch in a trailhead parking lot. We were hoping for some trail magic since it's a holiday weekend, but we weren't that lucky today. I started back on the trail first. We had a pretty steep climb and I wanted to get over with before I took an extended break. It ended up being pretty easy. My only issue was that I misjudged how much water I had left. I only had .5L remaining and the next water source, 6 miles away, was listed as unreliable. I rushed to get there and rationed my remaining water. I never show up at a water source with no water left. I drank .25L over the next six miles. The force was with me today, the water source was reliable. I filled up three liters and took a long break to filter it and to have a few snacks. Have I mentioned how long it takes to filter with the sawyer mini? FOREVER!
After my long break I only had 2.2 miles left to go. I planned on stopping at the Kirkridge Shelter, that would set me up with a six mile day into town tomorrow.
When I arrived at the shelter it was full of weekend warriors. They had set up their tents inside of the shelter and had their stuff spread out all over the picnic table. Since it was only 4:00 I immediately changed my plans. I decided to hike the additional six miles into town. The lure of showers and town food spurred me on. My new plan was to get into town and spend the night at the hiker hostel run by the local church. It is donation based and has free showers.
I made short work of the last six miles and got to town at 6:00. When I arrived at the hostel a new problem arose, there was no place to hang my hammock and the bunkroom didn't have mattresses. They common room did have a nice looking couch though, so I decided that would be my home for the evening.
The hostel was packed with other hikers. McFly, Old Eagle Scout, Gelati, T-Square, Laces, Mia, Clover, M&M, Pie, Blade, Forever, and 2 Bad Dogs were all there. We went down to the local bakery to see about dinner. They offer a hotdog and pie for 4.95. The pie was absolutely delicious, but we were still hungry so we went to the local pizza joint for round two. I got two slices, two garlic knots, and two beers. 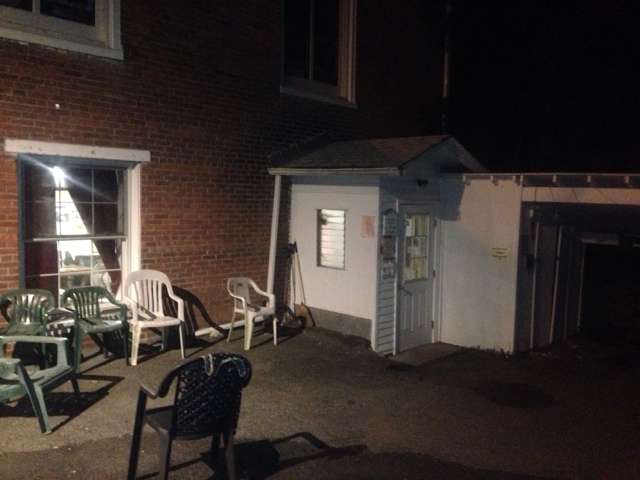 Church hostel(second oldest hostel on the trail)
We took a few beers back to the hostel and sat outside talking until late. I was up much later than I would have liked. People were still hanging out in the common room and I had to wait until they went to bed since I was sleeping in there. The new plan as of right now is to sleep in and go to the bakery for breakfast at 8. Then I'll hang around town for a little while to enjoy some of the festivities. I will then hike as far as I can get. I'll do a lower mileage day into Branchville to watch the soccer final on Sunday.
"Patience and perseverance have a magical effect before which difficulties disappear and obstacles vanish." -John Quincy Adams
Posted by Yoda at 8:16 AM