Day 105- Got My Climbing Legs Back On 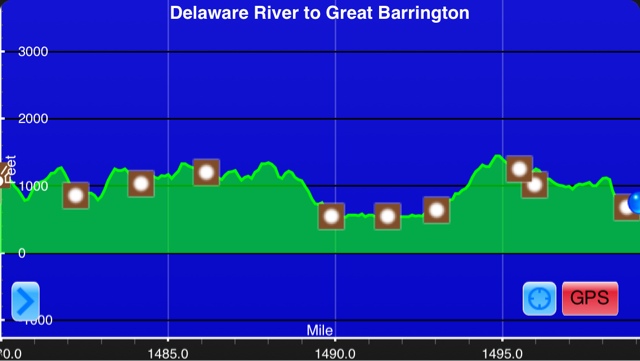 Bearded Woods was super fantastic. After a great nights sleep, I woke up refreshed and ready to crush some miles today. Hudson and Big Lu provided coffee and an amazing breakfast. I was sad to leave. They are such amazing people!!! 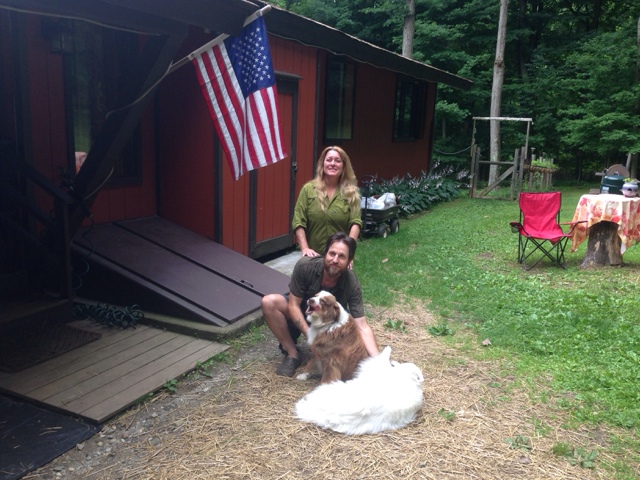 Big Lu, Hudson, Cedar, and Glacier
Big Lu offers a brown bag lunch special for $5. I couldn't resist having a lunch made for me to take out on the trail. I got a ham and cheddar sandwich, chips, Mountain Dew, and chocolate covered acai. 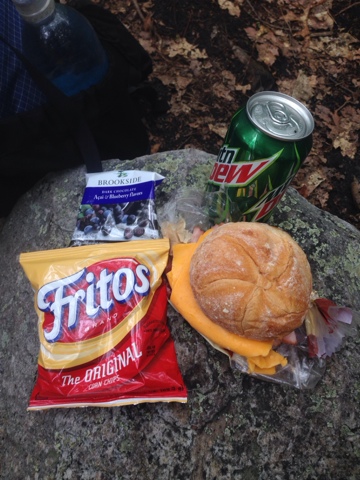 Thanks a Big Lu, it was perfect
As soon as all eight of us were ready to go, Hudson and Big Lu, drove us back to the trail. We had all come off of the trail at different spots, so it was time for us to say goodbye. Waiting and I rode with Hudson, while Big Lu took the rest of the group.
I started back up the, sketchy unmarked, side trail at 9:15 and was back on the AT by 9:30. The first part of the hike was straight uphill, followed by an equally steep downhill. Ten trail volunteers were in the process of putting in stone steps to help with the descent. They said the project would take two years to complete. I'm always amazed by the work these volunteers do. A little farther down the trail I went through another Lemon Squeezer type set of rocks. 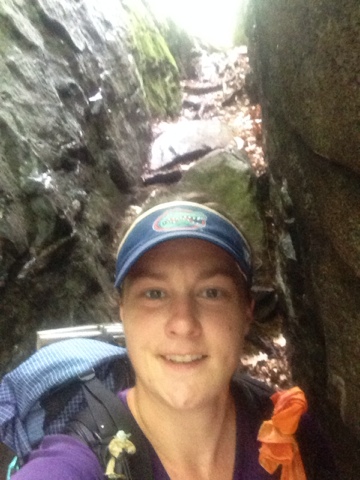 Lemon Squeezer part II
Just like with the original Lemon Squeezer, the mosquitos were atrocious. I hurried through as fast as I could, but at this point I don't think it really matters. I already have so many mosquito bites, a few more won't bother me.
The next section of trail took me over Sharon Mountain, which made me think of my sister-in-law, Aunt, and Mrs. Cherokee, who are all named Sharon. The neat part about this mountain is the race track at the bottom. I could hear the cars practicing for miles. 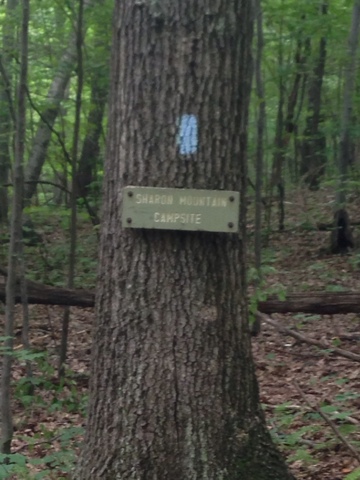 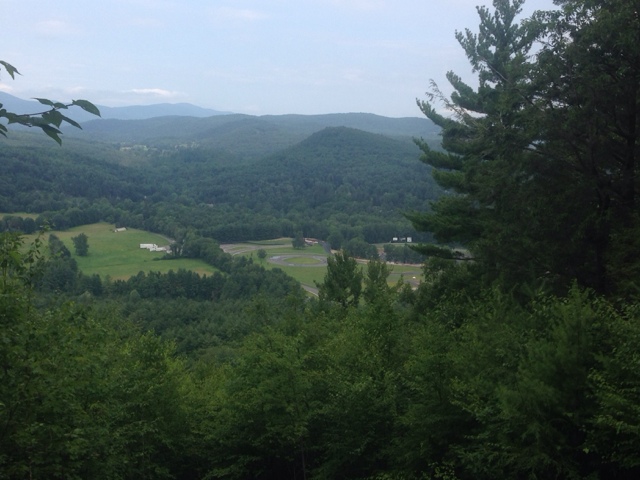 Race track(bottom right of picture)
On the way down the mountain I crossed a dry stream bed. It was really cool looking with all of the moss covered rocks. 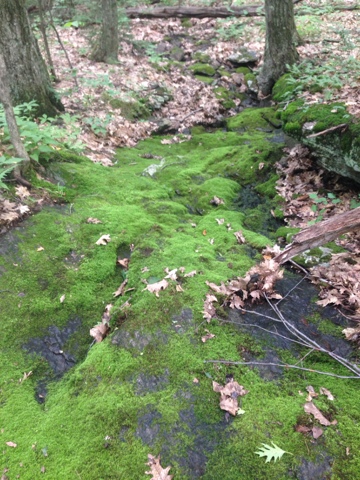 Dried up stream bed
I was really looking forward to making it into Falls Village, CT. I had two maildrops waiting for me at the post office there, one was my new shoes and the other was a care package with brownies, from Cherokee and Mrs. Cherokee. Unfortunately, the trail had a major detour around town because of a bridge that was being fixed. I had to walk three miles on the road to follow the detour and would have had to walk another five miles round trip to the post office. Instead I called the PO and had my packages skipped ahead two days to, Great Barrington, MA. I guess new shoes and brownies just weren't in the cards for me today. 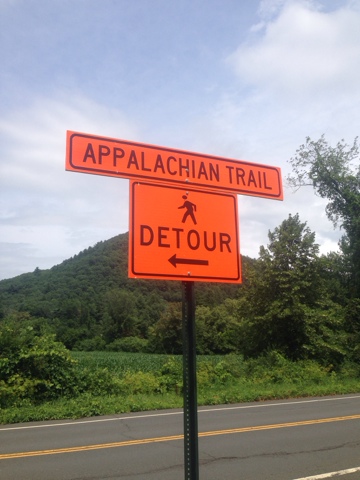 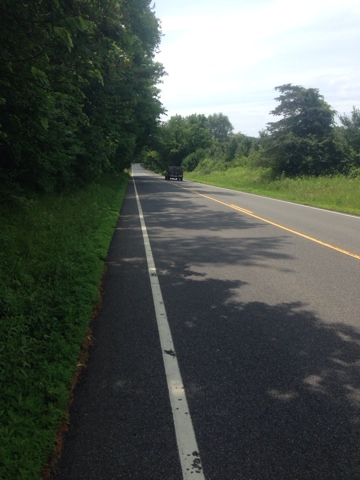 I really don't like road walks
Since I didn't make it into town, I was a little ahead of schedule. I decided to do some extra miles and hike into Salisbury, CT. There is a really sweet lady who lives there named, Maria Mcabe. For thirty five dollars you can stay at her house for the night. She is 86 years old and has been hosting hikers for 17 years.
The hike to her house was an easy seven miles, that included a two mile uphill climb. It's been awhile since I've had an extended climb like that and I really enjoyed it. 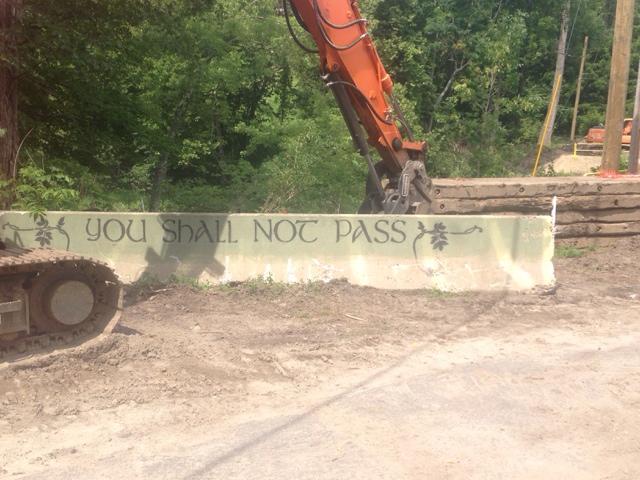 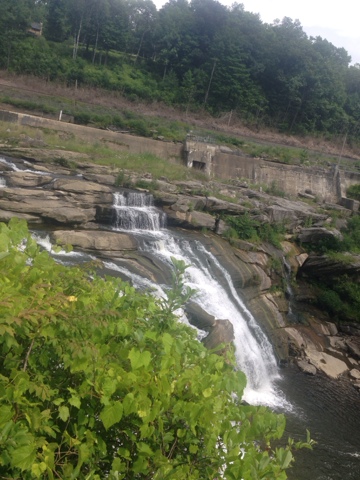 Back on trail now with a cool waterfall view
I made really great time and Maria picked me up at the trailhead. Clarity, who I met last night at Bearded Woods, was staying there as well. Maria had a few neighbors to visit with on the way home. She is an amazing lady who seems to know everyone in town. When she's not too busy helping hikers, she is running errands for her friends. It was like staying at Grandmas house! Once we got back to her place I settled into my room and took a shower(my second in two days).  Then she dropped, Clarity and I, off at the local pizza place. We had a great dinner and nice conversation. When we were finished we called Maria to come pick us up. She arrived one minute later even though she lived five minutes away. She said she got bored at the house and parked around the corner from the pizza place.
I'm really enjoying New Engkand. The people here have so much character and have been awesome to me. Tomorrow I will hit 1,500 miles and start a new state, Massachusetts.
"Let your dreams outgrow the shoes of your expectations." -Ryunosuke Satoro
Posted by Yoda at 11:16 AM