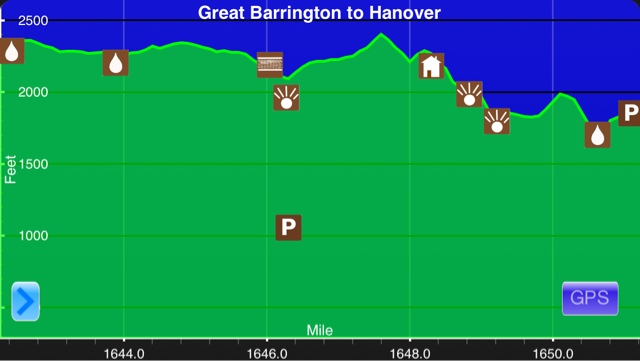 I'm getting pretty used to stopping in town. I feel like that's all I've done for the last few weeks; and it's been glorious. Former AT thru-hiker and my idol, Wired, described Green Mountain House as the best hostel on the trail so I knew I would have to stay there. My primary objectives for this town stop were the post office, two different outfitters, lunch at Cilantro Burrito, shower, and laundry.
Manchester Center, VT is an unlikely trail town. Most towns that are this hiker friendly the trail passes right through, but Manchester is 5.4 miles off of the trail. By hiker standards, that might as well be in Virginia. I'd heard that it was a really easy hitch into town so I wasn't too worried about getting there.
I slept in a little this morning. I didn't plan on it, but after my day long sprint yesterday I guess I needed the rest. We packed up and were back on the trail by 7:45. The one good thing about hiking with the boys, was we made up for sleeping in by hiking 3 mph.
After a few uneventful hours of hiking we came to Prospect Rock. It gave us a pretty nice view and we didn't even have to climb a mountain for it. 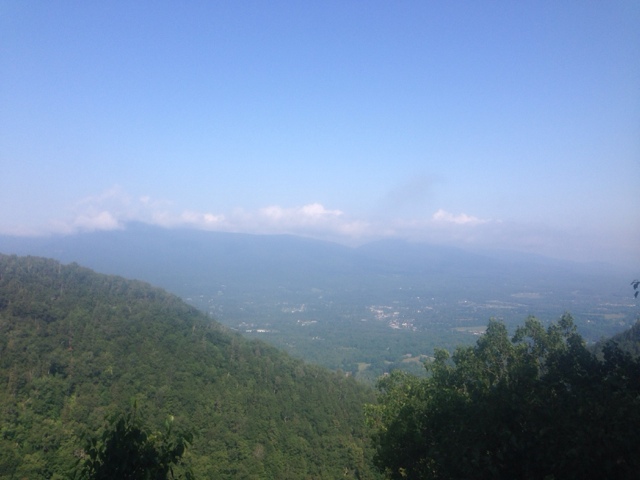 Very hazy day due to the humidity
We hiked for another hour before we came to VT 30&11. At this point it was time to go our separate ways. Stink Jacket and Pacman headed east to go get burritos and then return to the trail. I was going west into town. Before I could even get my thumb out a nice older gentleman stopped for me. He was on his way to the lake to go fishing, but had gone the wrong way. He took me a few miles towards town, but was getting on the interstate instead of going into Manchester Center. He dropped me off a few miles short. As I stood on the side of the road looking at my phone trying to figure out where I was exactly, a car going the opposite direction slowed down. The woman asked if I needed a ride into town. When I said yes she turned around and scooped me up. Marianne was a crazy, cool older woman. She asked if I like music, I said yes. She got all excited and asked if I knew Tom Lehrer, I said I didn't. She played me a song of his, The Irish Ballad. She sang along and bopped around in her seat. It was like watching a 5 year old. The whole thing was very surreal. She took me to the post office and offered to wait for me, which was very nice. When I got back in the car the subject of my birthday came up. She sang me a wildly inappropriate birthday song and then played me another Tom Lehrer track. I was laughing the whole way to the outfitters. She very solemnly explained that she couldn't drive me around all day, to which I said she had done more than enough. Before I got out if the car she told me a raunchy, but hilarious joke, and wished me well on my journey. I asked if I could take her picture, but she declined. Even without a picture, I'll never forget the crazy, cool lady from Manchester Center who gave me a ride around town!
I was thrilled with both outfitters in town. I got new super feet insoles for my shoes, I also got a pair of my darn tough socks replaced for free, and I got my hiking pole fixed! It was a great day for my gear.
My next stop was Cilantro Burrito. It was like an upscale Chipotle and it was delicious. I was still hungry so I went to the local ice cream shop for dessert. I'm in Ben and Jerry's country, but it was too far away to go there. The locally made ice cream shop was amazing. I got a small coffe health bar ice cream that was huge. 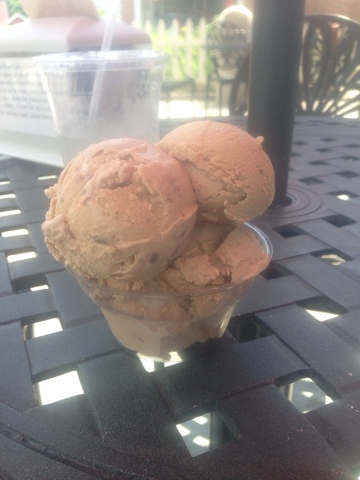 3 scoops in the small
I had sent myself a resupply box from Wiiliamstown, so I didn't need anything from the grocery store. I called Jeff, the owner of Green Mountain House Hostel, and he came to pick me up. The hostel is amazing. It's a proper house located in the outskirts of town. We have full run of the kitchen, laundry room, and living room. Jeff even provides free soda and a pint of Ben and Jerry ice cream. It was a great place to relax and take care of town chores. I knew a few of the other hikers staying there, Clarity, Papa Al, and Phil Co, were all there. They slack packed today, so they are actually 18 miles ahead of me. Clarity and I hung out most of the evening. It's really nice to connect so easily with another woman on the trail. It's a rare thing out here. 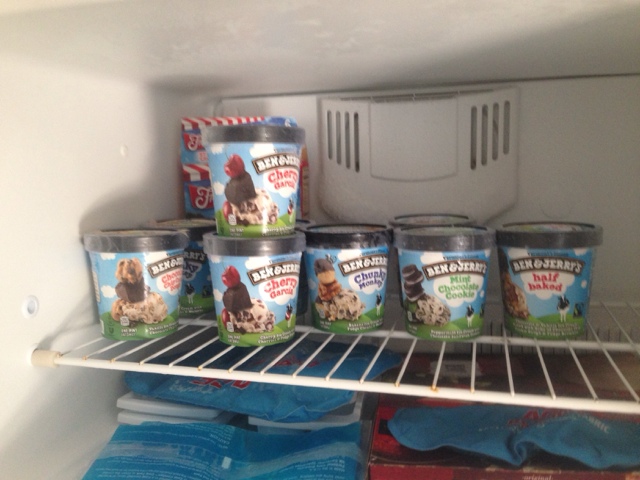 Freezer full of Ben and Jerry's 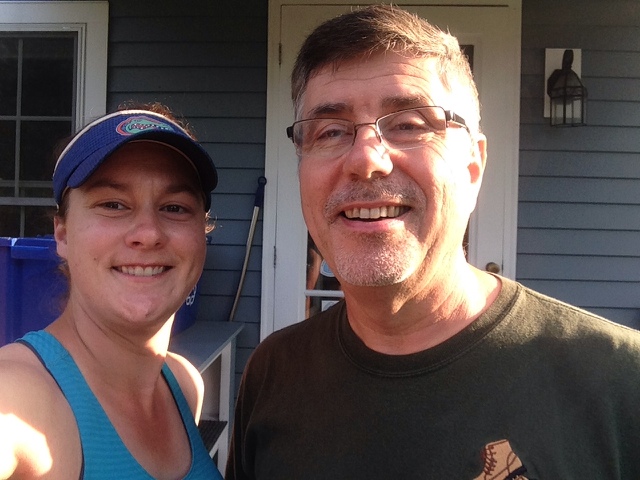 Thanks Jeff for everything! 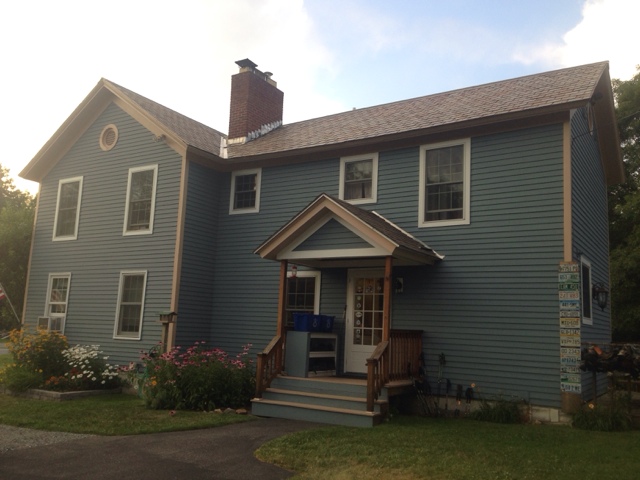 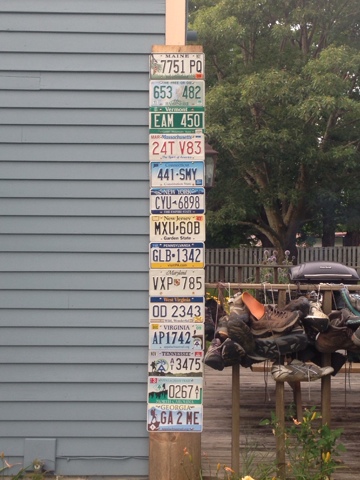 All of the states from the AT 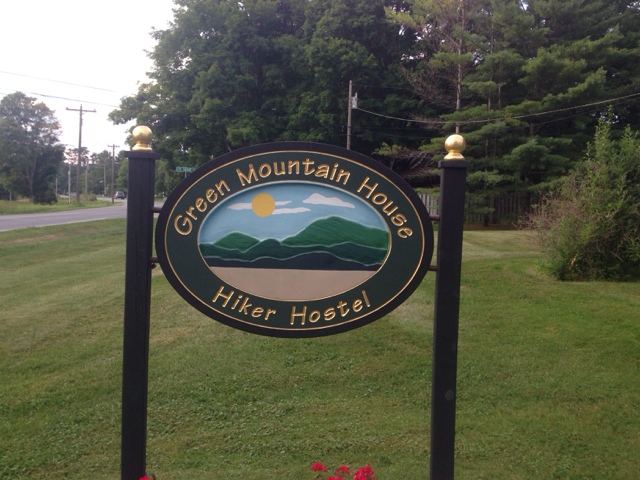 I highly recommend
Once again I got behind on taking care of things tonight. I fell asleep while writing my blog, so I had to finish it up in the morning.
"Whenever you should doubt your self-worth, remember the lotus flower. Even though it plunges to life from beneath the mud, it does not allow the dirt that surrounds it to affect its growth or beauty." - Suzy Kassem
Cell phone reception will be spotty for the next few days. I might not be able to publish my blog everyday, but I'll do my best.
Posted by Yoda at 7:22 AM