Day 148- The Hardest Mile Of The Appalachian Trail 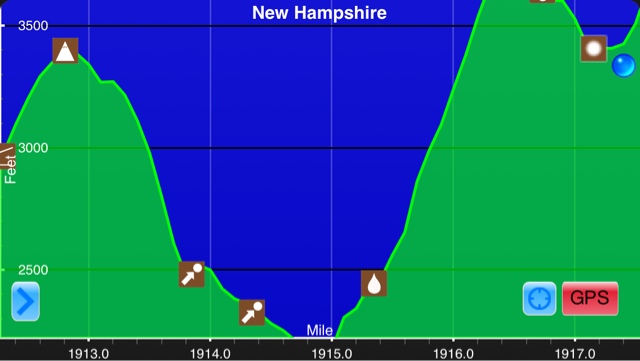 Today we did the hardest, or if you have the right attitude, the most fun mile of the AT, Mahoosuc Notch. Guthook describes this section as, "a deranged jumble of boulders at the bottom of this deep cleft between Mahoosuc Mountain and Fulling Mill Mountain". The notch is one mile long and takes anywhere from 2-5 hours to complete. We decided to tackle it as a group because in some places it is necessary to take your pack off and push or pull it through the crevices.
Due to the insane amount of college kids at the shelter last night we decided to get up early so we could beat them to the notch. I was up at 5:30 and made sure to make a lot of noise to wake up the kids next to me. They didn't seem too happy for such an early wake up call. Airlock and I were the first ones out of camp, but 2 Bad Dogs and Cruise Control were only a few minutes behind us. The first 1.5 miles of the day were exactly like yesterday, very slow going.
We made it to the top of Fulling Mountain after a lot of effort, but there wasn't a view to be had. We did see a rock cairn that looked like a dog though. 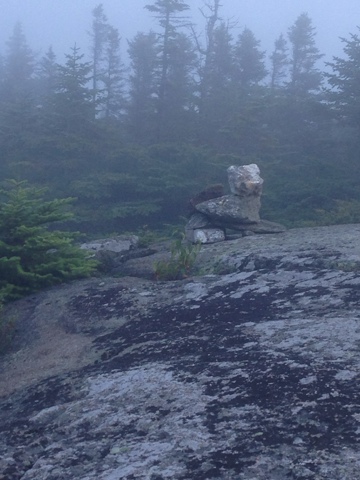 Doggy rock cairn
After a steep descent over slick boulders we finally made it to Mahoosuc Notch. I was determined that no matter how hard it turned out to be, I was going to have fun. 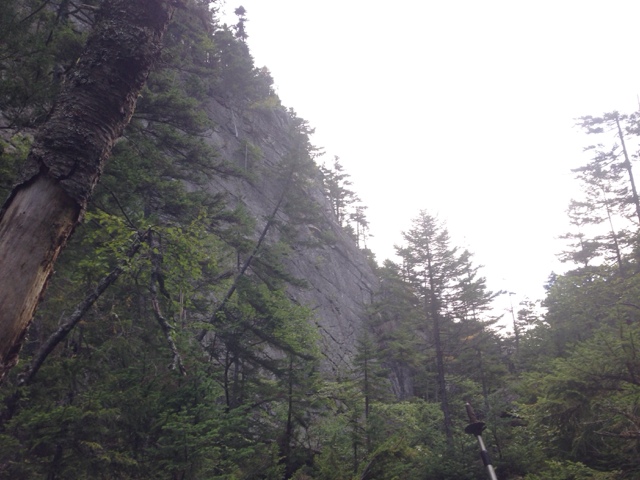 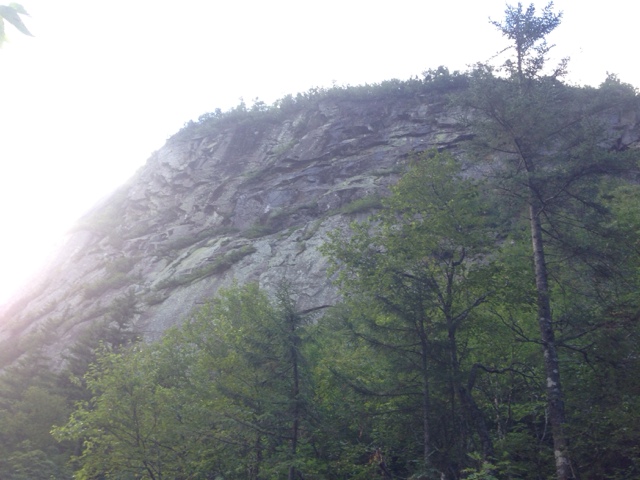 Fulling Mill Mountain
Mahoosuc Notch lived up to expectations. I had a blast, but it was really hard. It took us 2.5 hrs to make our way through. I was glad we went through as a group. Although it took us longer to make it through as a group, the moral boost of being together was great. It also allowed for us to find better ways to make it through. 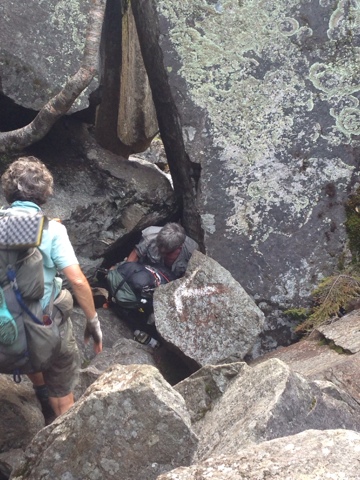 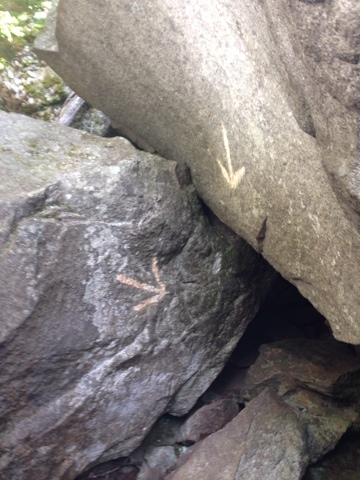 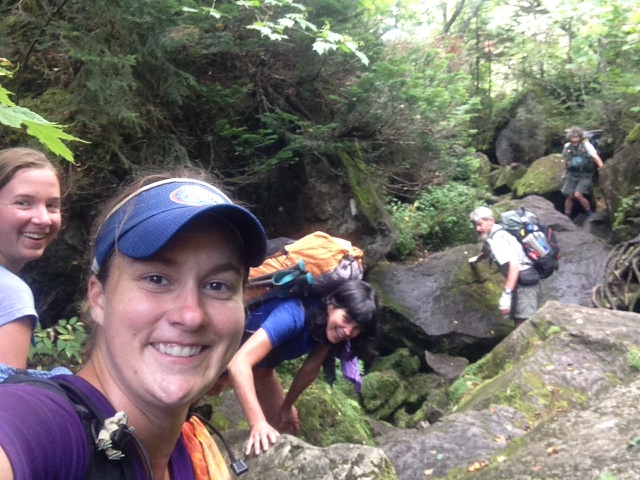 I got mad selfie skillz: Me, Cruise Control, Airlock, Art, Lynn(2 Bad Dogs)
I've been looking forward to the Notch since Georgia, but I'm glad to have it behind me. My ankle really hurt after all of the twisting, turning, and climbing.
After making our way through the jumble of boulders we had to climb up Mahoosuc Arm. The climb up the Arm was 1,500' of elevation over a little less than a mile. Most of the climb was up large slippery boulder slabs. I'll be glad when I can be a hiker again instead of a rock climber. 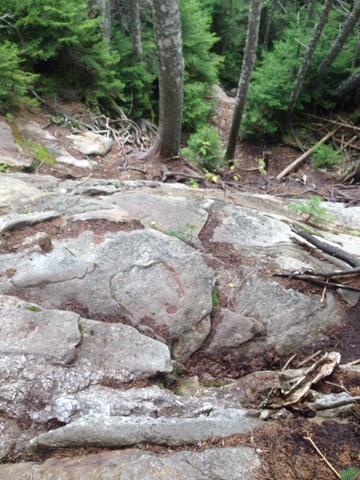 I climbed up this vertical wall of rock 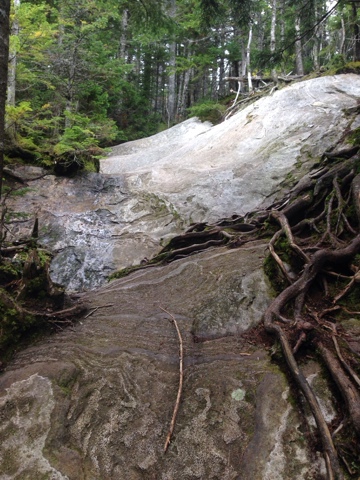 Looks like fun, right: They should call it Mahoosuc(k) Arm
By the time I made it to the top, the fog and mist was all gone and I got a spectacular view. 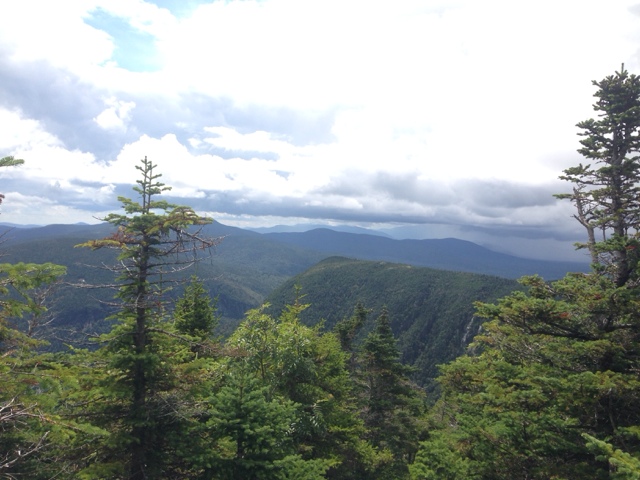 Mahoosuc Arm
As hard as the climb was, I actually enjoyed it. Yes, it sucked and yes, it was really hard, but I would rather climb up all day than go downhill. 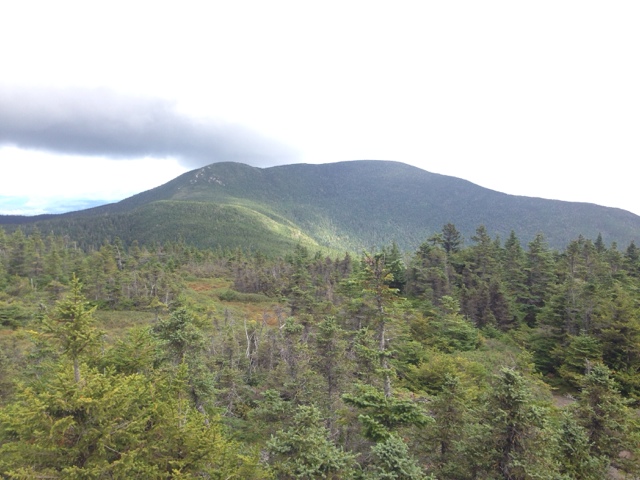 Old Speck Mountain(I'll climb that tomorrow)
The descent down to Speck Pond shelter wasn't too bad. I was also exited that we were only .9 miles from our campsite. We knew that today was going to be really difficult, so we planned an extremely low mileage day. We were hoping for nice weather so we could swim in the pond, but that didn't happen. It was a really nice day, but it was really cold out. 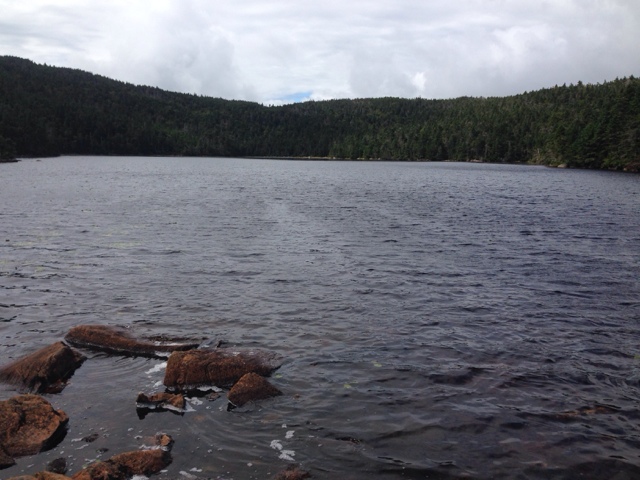 Speck Pond
I'm not sure it got above 55 degrees today. Maybe it was in the mid 60's, but with the wind chill it was cold. Tonight is going to be in the low 40's, with a windchill of 25-35 degrees. Thankfully we got to camp ridiculously early, 2:30, and got setup before the large groups came in. Cruise Control and I are sharing a tent platform even though we both use hammocks. There was no where else for us to hang. Airlock and 2 Bad Dogs took the other two platforms for themselves. I had Mac&Cheese for dinner, but I was still hungry so I cooked some noodles too. Then I had some cookies, trail mix, and a snickers bar. I guess I worked up an appetite today.
Hopefully the trail will get a little easier soon. I'm over these ridiculous boulder/rock climbing sections. Going .75 miles per hour is exhausting. I'm not expecting things to be easy, I'm just asking for some proper trail conditions again.
"Write your injuries in dust, your benefits in marble." -Benjamin Franklin
Posted by Yoda at 7:11 AM