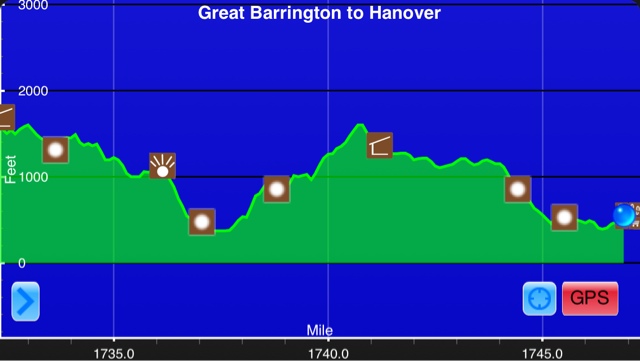 Why do I even bother making plans? Once again, I didn't stick to them. The plan was to stop short of Hanover so I could nero in to town tomorrow morning. What I didn't realize was that the two and a half miles leading into town was through another town, Norwich, VT. Since there was no logical stopping point I decided to just go to town today.
The original plan called for a 13 mile day, so I slept in. I was actually the last person out of camp this morning. I think that might be a first. I had a much easier day today. The climbs weren't as severe, but the downhills seemed longer. I was making really good time even though I was trying to take it easy. I haven't had much pep in my step for the last three days. I was starting to get concerned that I had gotten Lyme disease. Unfortunately, most of the symptoms are the same as long distance hiking; fatigue, aching joints, and mood changes. I had just about decided to go see a doctor in town on Monday. (Men and children might not care to read this next part). As it turned out Lyme disease also has certain parallels to the side effects of menstruation. I had started my period. Without the concern of Lyme disease, I felt much better today.
I breezed up the first climb of the day and had several rewards for my effort. 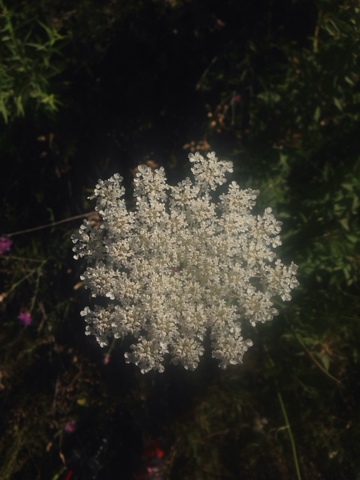 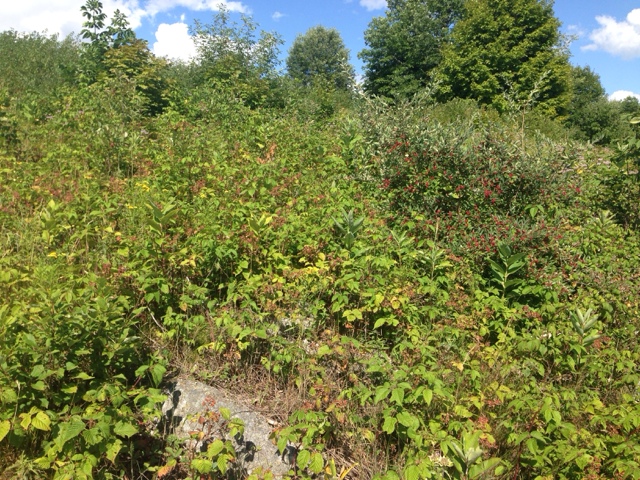 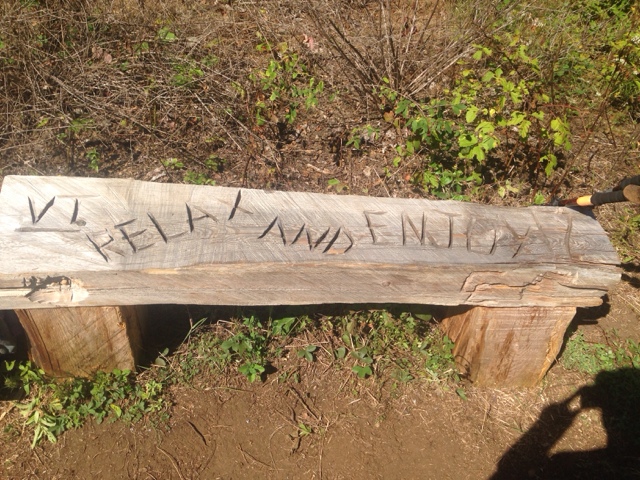 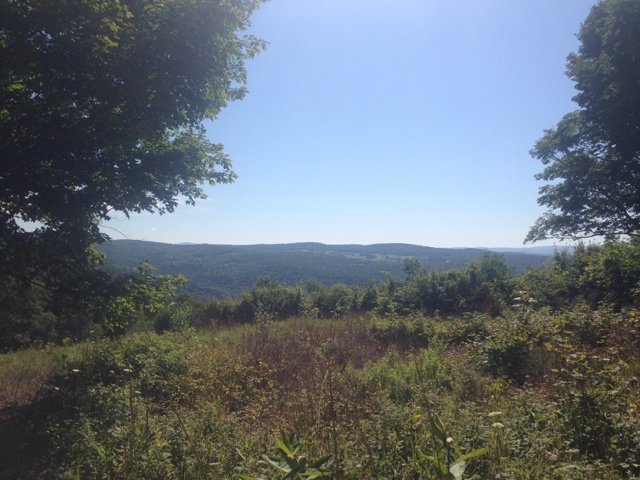 View from great bench
At this point I only had 11 miles left for my day and it was only 9:30. I sat at the bench and enjoyed the view for awhile, but I couldn't just sit there all day to kill time. I had a long steep downhill into, West Hartford, VT. When I came out of the woods, I had a 1.1 mile road walk. I don't like walking on the roads normally, but this was pleasant. A good portion was in the shade and I crossed over a big river. As I was going over the bridge for the river a couple of local kids were jumping off of it. As if that wasn't extreme enough, they had driven their truck
over and were jumping off of the top of the cab, over the railing, and into the river. Kids!!! 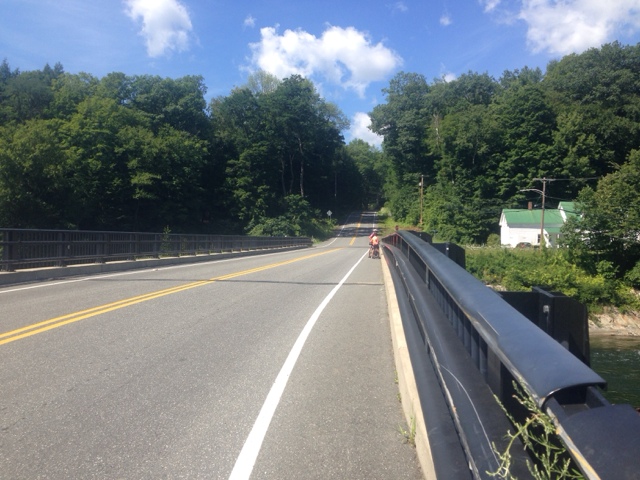 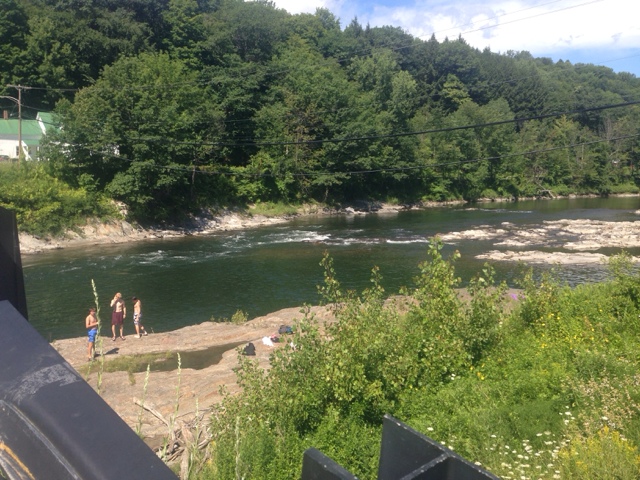 Kids having fun
Next to the bridge is the home of trail angel, Randy and Lynda. Unfortunately they weren't home when I was there, but other hikers were hanging out so I stopped by. Randy and Lynda will let hikers camp on their property, stay in their barn, cook an amazing breakfast, and keep out a cooler full of sodas. I was sorry I didn't get to meet them, but I enjoyed a soda in the shade. 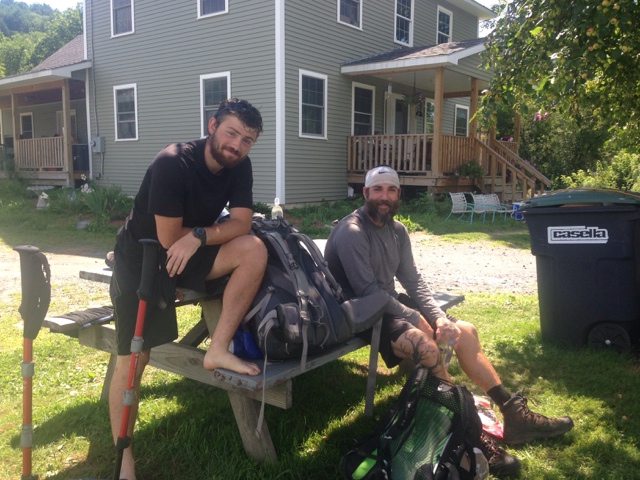 Forgetful Jones and Oscar Mike
Since I wasn't in a hurry today we hung out for a long while. I told them of my plans to camp short of town, they broke the news that it was a 2.5 mile road walk into town. Finally, they convinced me to just hike into town with them. It wasn't a hard sell. We only had ten miles to go and 3 miles off that included walking through towns.
Making things even better, the trail for the remainder of the hike was lovely. It was mostly through a pine forest, which as many of you already know, is my favorite. 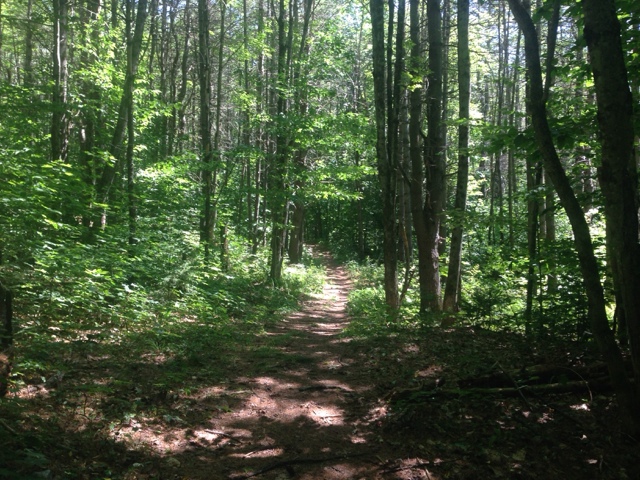 Nice trail
Even with all of my breaks and lingering around benches and coolers, I still made great time. We made it into town by 3:30, but first we crossed another milestone. 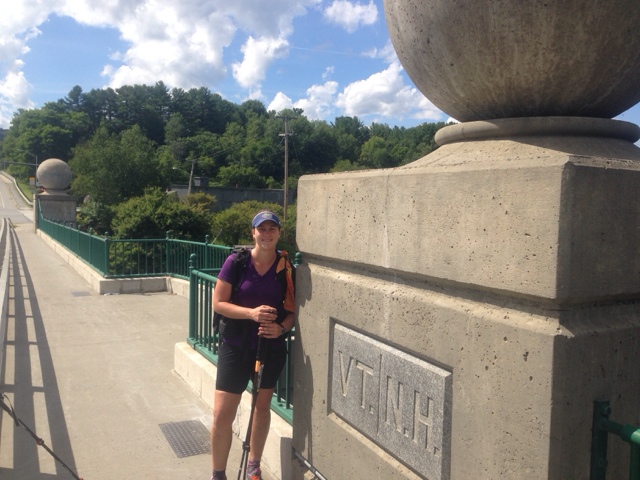 Goodbye Vermont, Hello New Hampshire
Hanover, NH is home to Dartmouth College. It is a wonderful trail town. Everybody is extremely nice to hikers. There is a list of trail angels that allow hikers to stay in their homes for free. Unfortunately, they were all full when I rolled into town. There is also an area to camp on the edge of town by the colleges soccer fields. We decided to hangout in town and then camp there. Another awesome thing about Hanover is all of the freebies. The local pizza place gave us a free slice of pizza, we bought a beer in return, it only seemed fair. The bakery gave us a huge bag of day old muffins and donuts. The deli gave us a free bagel. Since we were still hungry we went for burritos. The town was a strange mix of college kids, tourists, and hiker trash. We sat on the patio and people watched for hours. Oscar Mike went to the store and returned with beer. I went to Starbucks and returned with a Venti iced latte(different priorities lol).
Thanks Lisa and Nate for the Starbucks gift card!
We headed out to find the camping area. After many wrong turns and four sets of horrible directions we finally found the spot. Everybody kept telling us to follow the trail through town until we got to the soccer fields, the only problem was we passed five different soccer fields. Dartmouth must have the highest amount of soccer fields per capita. By then it was almost dark so we quickly set up in the woods. After setting up camp we went back to the grassy area surrounding the fields and drank beer with a group of four SOBO's. It was a really fun afternoon and evening.
We are hoping that tomorrow one of the trail angels will have space for us. If not the recreation center has free shower and laundry for hikers. Hanover might just be my new favorite trail town.
"Life can be like a roller coaster with its ups and downs. What matters is whether you are keeping your eyes open or closed during the ride and who is next to you." -Ana Ortega
Posted by Yoda at 6:30 AM