Day 59- The Struggle Was Real 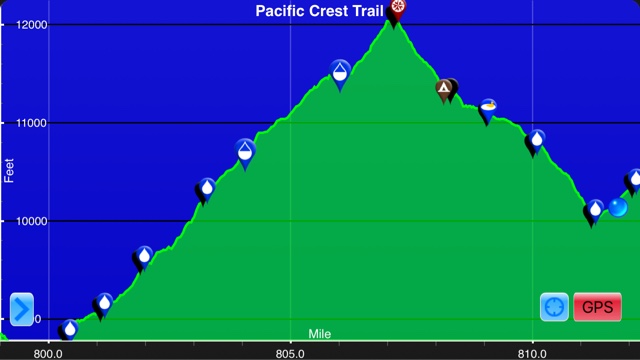 Today was a low mileage day. I learned my lesson yesterday and I wasn't going to make the mistake of trying to do two passes in the same day today. Everyone was worn out from yesterday so we decided to sleep in and take our time hiking today. I slept soundly and didn't get out of my tent until after six fifteen. I'm trying something new for breakfast on this stretch, vanilla flavored Carnation Instant Breakfast and Starbucks instant coffee mixed together. It was super tasty! I'm a big fan and as long as water continues to be plentiful this will be my breakfast of choice. I still need to figure out a way to up the calories on it though. I might try adding powdered milk. As I was leaving camp I was greeted by a deer and a beautiful mountain. 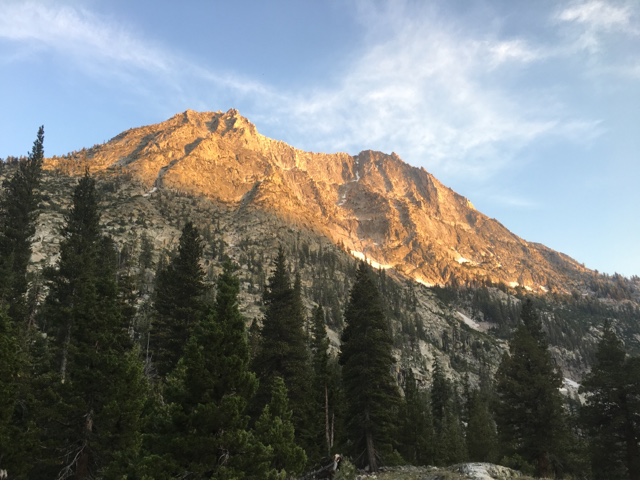 Pretty mountain glow
The bridge over the river was like something out of Indiana Jones. It was a sketchy suspension bridge with missing planks and it swayed from side to side with each and every step. 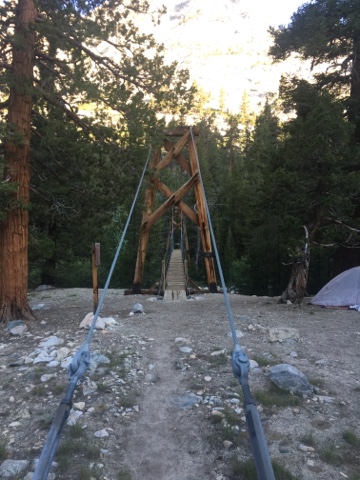 Suspension bridge
Sketchy stream, creek, and river crossings turned out to be the theme of the day. I lost count at how many I had to deal with. Immediately after crossing the Indiana Jones bridge I hit the 800 mile mark. It has taken forever to do this last 100 miles. 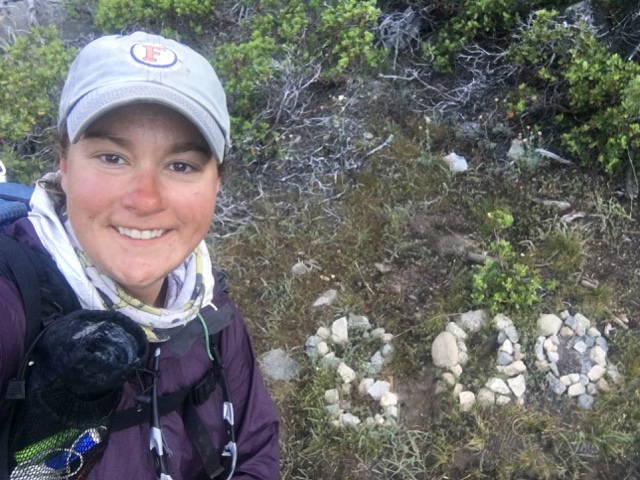 800 miles
Hopefully the next one hundred miles go by a little faster. I wasn't looking forward to the next seven miles. They were all uphill and mostly steep. This section of the Sierra is marked by five major mountain passes, Forester, Glen, Pinchot(pronounced PIN-cho), Mather, and Muir. Forester was pretty easy, just slightly terrifying. Glen was difficult because I did two passes in the same day. Pinchot promised to be difficult because it was a lot of elevation gain, 3,500' over a very long distance. You would think that over seven miles 3,500' wouldn't be so bad, but most of the elevation gain was steep over short distances. It also included a lot of rock steps, which are my nemesis. I would rather climb up steep trail than step up onto rocks stairs.
Early into the climb I went close to the Woods Creek Waterslide, which isn't as fun as it sounds. Woods Creek runs over polished granite. It is a beautiful sight, but very dangerous. I was glad that we didn't have to cross it. 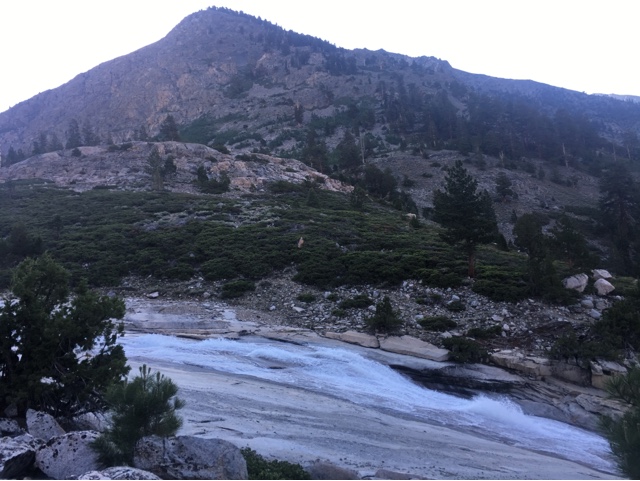 Woods Creek Waterslide
For the next several miles I walked through a mosquito infested forest full of rock steps. I tried to hike as fast as I could, but it was steep and my legs were tired. I got eaten alive. I also had three or four water crossing to deal with. On the very first one I stepped on a loose rock and got one of my shoes soaking wet. I like to call that the freedom step. Once one foot is soaking wet it doesn't make sense to try to keep the other dry. I went right through all of the next crossings without hesitation. I carry Luna sandals for creek crossings, but it is time consuming to stop at each one to change into them. I probably saved an hour this morning since I didn't have to stop and change shoes. 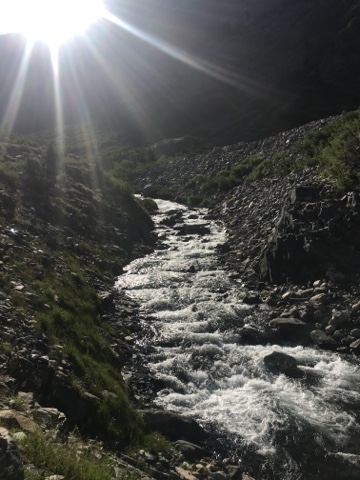 Stream crossing
As difficult as the hike up to Pinchot Pass  was, it was equally beautiful. Pinchot Pass is named after Gifford Pinchot(1865-1946), appointed by Theodore Roosevelt as the first director of the US Forest Service in 1905. He later became a two-term governor of Pennsylvania. 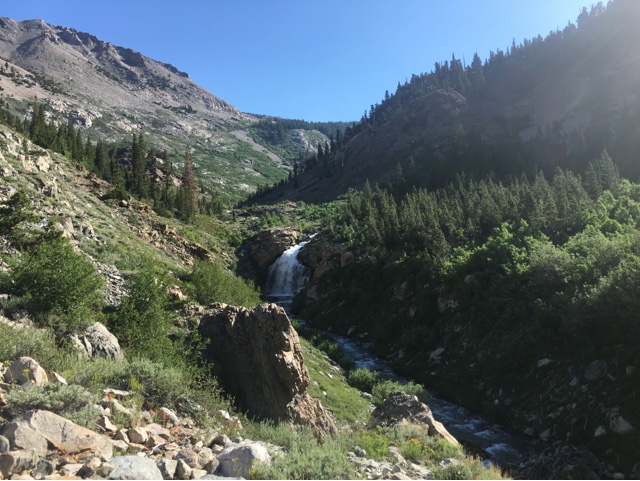 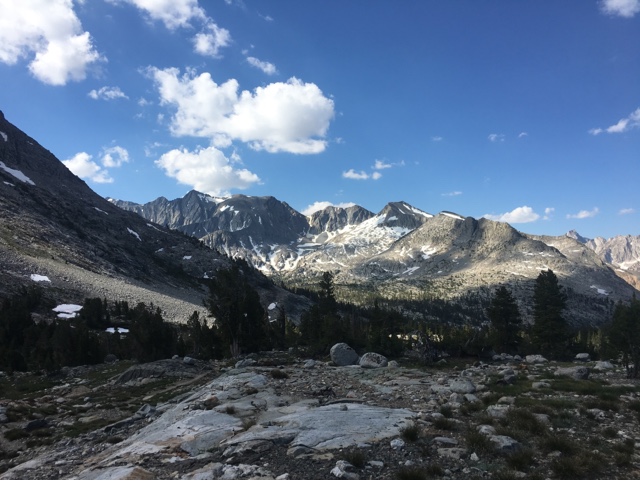 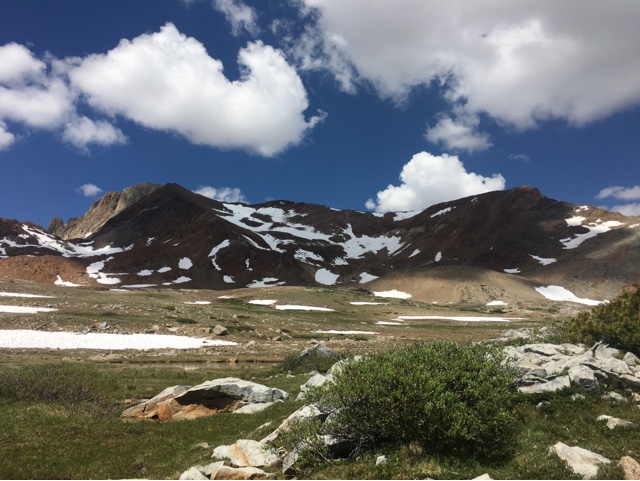 Flat section before the last climb 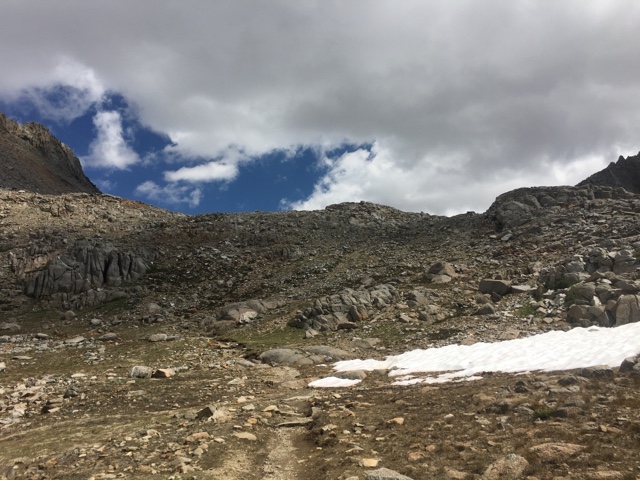 View up to the pass
I huffed and puffed my way up the last mile and a half. Clouds were beginning to blow in, but I couldn't tell if they were friendly or not.

To the north
Unlike yesterday, I was able to enjoy my lunch from the top. I decided that the clouds rolling in were the friendly variety. I hadn't seen the rest of the group since camp this morning. Just as I was getting ready to pack up and leave they finally showed up. We chatted for a little bit, but I had been there for over an hour and was getting cold so I left. The trail going down went by fast. I had a few snow fields to clear, but nothing too bad. I did get close to one snow bridge, which made me nervous so I steered well clear of it. 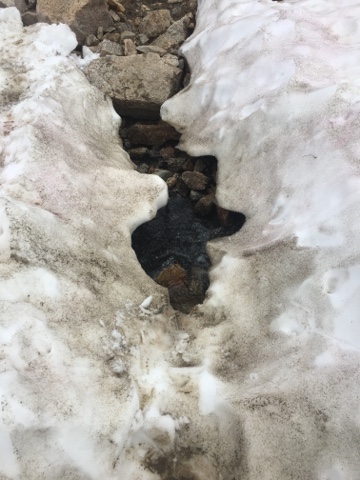 Snow bridge means there is running water below
The remaining miles weaved in and around alpine lakes. I was going to stop at the first one, Majorie Lake, but a JMT hiker told me three lakes farther down had a bear and cubs swimming in it. How could I not go to see something like that? To get there I first had to cross several streams and creeks. My feet had finally dried out from the morning crossings and I didn't want to change shoes and miss the bears. I decided to risk it and rock hop/log walk my way across. I was successful too. I managed to keep my feet dry on each and everyone. 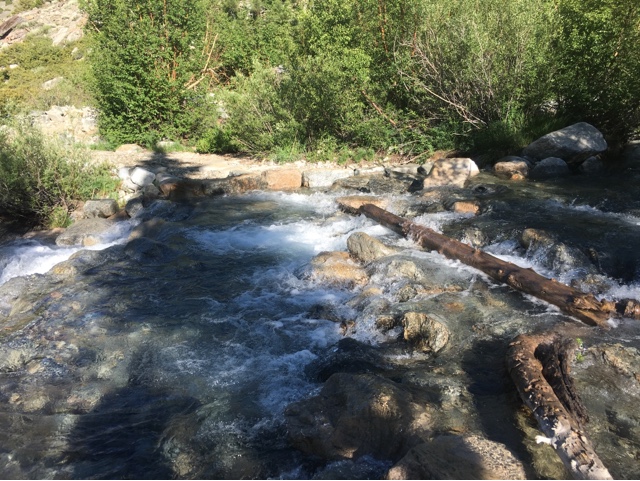 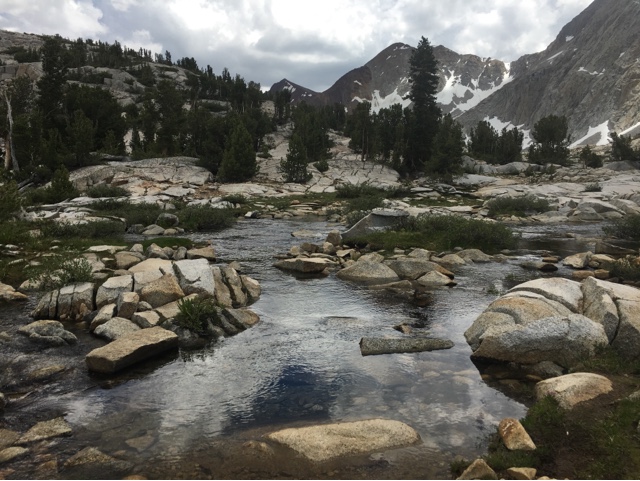 Lots of rock hopping on this one 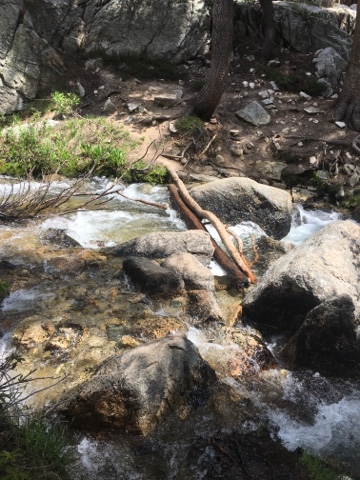 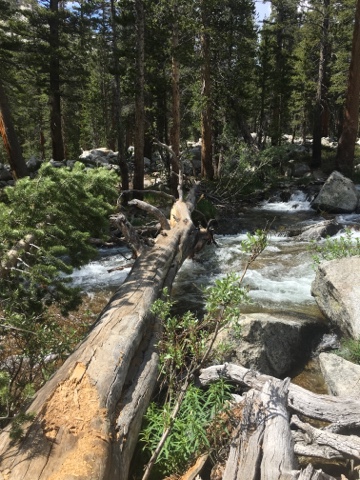 Final crossing of the day(most difficult too)
There were several more crossings, but I don't always remember to take a picture. By the time I got to the lake the momma bear was getting the cubs out of the water. It was really cute. I don't think the cubs wanted to get out and she had to go in after them. I tried to take a picture, but the light was against the lense and it didn't come out. I'm hoping it came out on the GoPro video.
I waited for the rest of the group at the last major river crossing. I wanted to make sure they got across safely, plus I had already scouted out a good place to cross. Once I made it, on the scary log pictured above, I waited for an hour and a half for them to show up. Once again, I was just getting ready to give up and start hiking again when I saw, Zuul, break through the tree line. I shouted out directions over the roar of the river and went upstream to watch her cross on the log. Next was Outro, Sprinkles, and then Homegrown. Everyone made it across safely. We hiked .3 miles to a large tentsite and setup camp. Tomorrow will be Mather Pass. Every JMT hiker I saw today had something different to say about it. Some said it was treacherous, others said it was basically fine. I'm not sure what to expect, but I'm sure it will be another adventure.
"Yet how hard most people work for mere dust and ashes and care, taking no thought of growing in knowledge and grace, never having time to get in sight of their own ignorance."
- John Muir
Posted by Yoda at 12:16 AM