July 22, 2016
0 miles hiked
I am officially closer to forty years old than thirty. I'd like to say that I am a little wiser, but really I'm just one year older. I treated myself by sleeping in until eight o'clock and I stayed in bed until nine. I was hoping for breakfast in bed, but since that was impossible I settled for taking the bus downtown for breakfast. I went to a gourmet donut shop and paid eight dollars for six miniature donuts. They were good, but not eight dollars good. Then I went to Starbucks. Thanks Mama Brisko for my Starbucks gift card. I put it to good use. After my caffeine fix I walked over to the hostel to see what Outro, Evac, U-Turn, Homegrown, and Sprinkles were up to. They surprised me with birthday cobbler and embarrassed me by singing happy birthday. 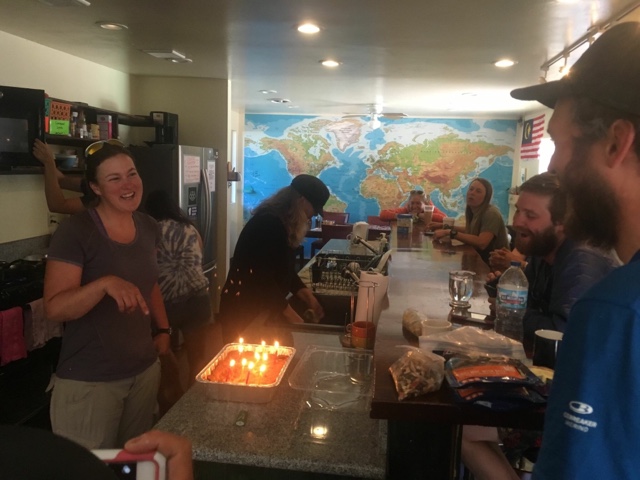 Birthday peach and blueberry cobbler
I chilled with the Wolf Pack at the hostel for awhile, but eventually I had to leave. I still had a few town chores to take care of and I wanted to get them out of the way so I could enjoy the rest of my day. I took the bus to the library so I could take advantage of using a computer. For some reason I couldn't get the computer to recognize my GoPro. I promise that one of these days I'll have some awesome videos for you to watch. I settled for writing an article about my summer hiking bucket list. Once that was done I walked about a mile down the road to go shopping for some new running shorts. I didn't end up finding anything that I wanted to spend money on.
I decided to go see a movie. I was super stoked to see the new Star Trek movie. It had gotten really good reviews already and had just been released to the public today. I got to the theater too early so I decided to grab a snack and a beer. I was right next to Basecamp Pizza so I went there. They had an awesome New Belgium sour beer called, Tart Lychee Sour, it was delicious and strong. I also had a Thai curry chicken pizza that was amazing. The bartenders were super friendly. I told them I was going to see a movie and they suggested that I buy a can of beer togo. I thought that sounded like a wonderful idea. I got a coconut porter from Hawaii and snuck it in with me. I also got the biggest small popcorn I've ever seen. It was more like a large. The movie was highly enjoyable. JJ Abrahms is doing a great job rebooting the franchise. I had planned to go to Harrahs All You Can Eat(AYCE) buffet after the movie, but I wasn't very hungry. I walked around Heavenly Village for a little bit. They had live music playing at almost every restaurant in town. I ran into some hikers that I knew, including Smiles, and we chatted for awhile. I was starting to get hungry so I walked over to Harrahs. Unfortunately, they had already closed down the buffet. I didn't realize that it closed at eight o'clock. Oh, well. I wasn't AYCE buffet kind of hungry. I settled for a sub from Subway and walked to the grocery store. I bought another porter and a pint of Ben and Jerrys Coffee Coffee Buzz, Buzz, Buzz ice cream. I thought about going to the casino to try my luck at blackjack, but I decided that probably wasn't a good idea.
Once back at the hotel I found a card attached to my door. My friends Pogo and Painter had the room next door. They heard that it was my birthday and made me a homemade birthday card. It really put a smile on my face. I stayed up way too late watching movies on HBO and eating ice cream. All in all it was a great birthday.
Thanks to Mama Dane for the nice birthday card, to my parents and Aunt and Uncle for making the last few days in Tahoe doable, my brother and sister-in-law for the nice gift, Chris in Nashville for the Amazon gift card, Margie and George for the nice donation, and to everyone else who took the time to wish me a happy birthday. I really felt the love and it made my day really special. 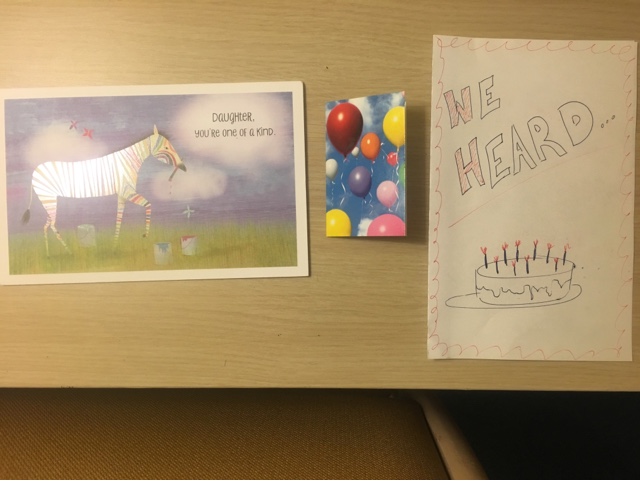 A few of my birthday cards 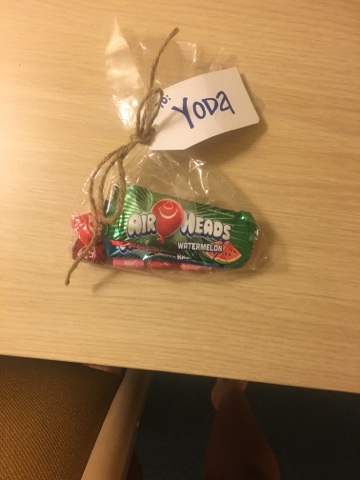 Thanks for the candy, Whitney
I'll probably spend most of the day in town tomorrow, but then I have to get going. Staying in town is expensive and I'm really falling behind the bubble. It is time to start picking up the miles and and to stop goofing around in town.
"We are what we repeatedly do; therefore excellence is not merely an act, but a habit." Aristotle
Posted by Yoda at 8:00 PM