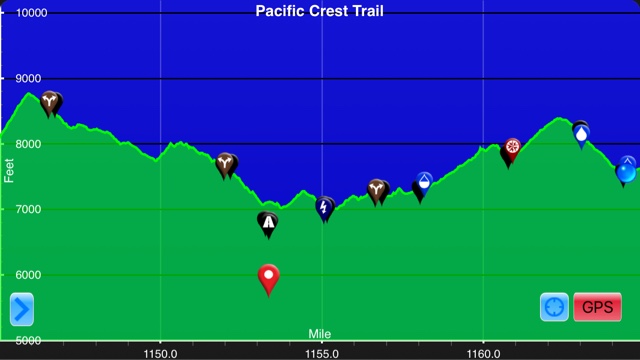 Total up/down:+3275/-3767 feet
Today should have been an easy 25-30 mile day, but events from last night threw my day into total disarray. I woke up at two o'clock lying on the cold hard ground. My sleeping pad had deflated. I thought, hmmm that's a little strange. I blew it back up and went back to sleep. Twenty minutes later on was back on the hard ground. It became obvious then that I had sprung a leak. I spent the night waking up every ten to twenty minutes and reinflating it. I didn't exactly get a good nights sleep.
I knew that in 8.5 miles I would come to the trailhead at Donner Pass. I decided to get there as quickly as possible and try to find a water spigot. My trail guide mentioned that there was one hidden behind a building there. My thoughts all morning long were consumed by fixing this problem. I can not spend another night lying on the ground. 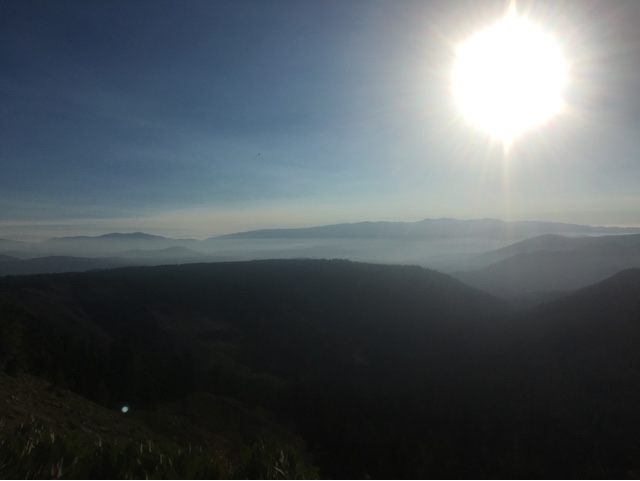 Still hazy. Reminds me of the Blue Ridge Mountains
The hike to Donner Pass went by quickly. I was really in the zone. I hiked up to a ridgeline and followed it to the pass. Just before the pass I hiked through Donner Ski Area. It seemed like a nice small mountain. Probably where all of the locals go.

View from the top of the ridge 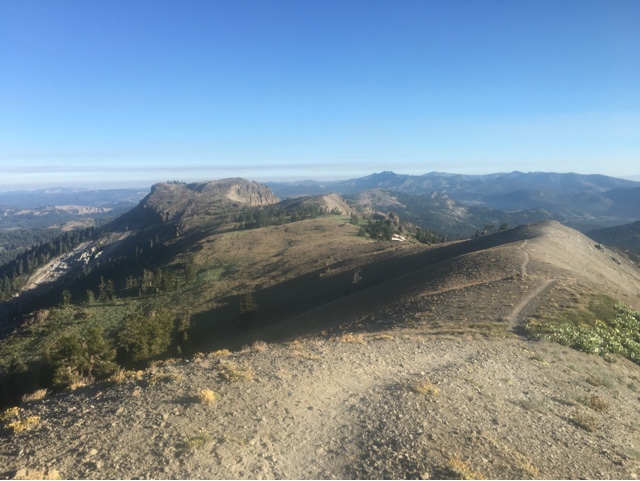 View of the ridgeline hike
I enjoy walking ridgelines for the most part. I'm up above tree line and I have a 360 degree view. It was still early in the morning, but it was already ridiculously hot out. With only a few miles to go I came across Roller Pass. It was marked with a historical sign describing the significance of the area. The emigrants of the 1800's were amazing. The fact that they could get their wagons up and over the pass blows my mind. Read the informational plaque for the details of their ingenuity and determination. 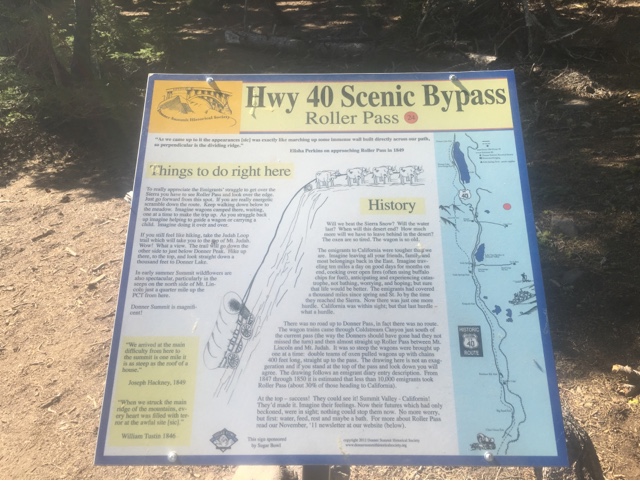 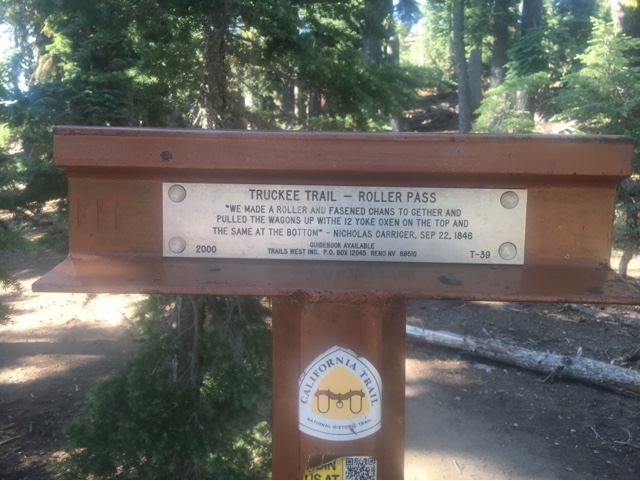 Rollers they used with the oxen 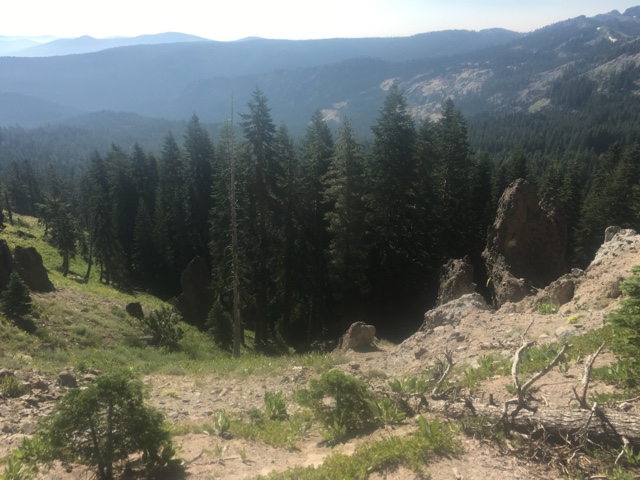 Roller Pass
Quickly after leaving the pass I began the descent to the Donner Pass trailhead. Donner Pass is named for the tragic Donner party. 87 pioneers wintered here in 1847 on there way from Springfield, Illinois, to Sutter's Fort, California. Only 46 members of the group survived the winter. Whether or not they resorted to cannibalism is a matter of historical dispute. It is now a tourist attraction for hikers, skiers, and motorcycle enthusiast. 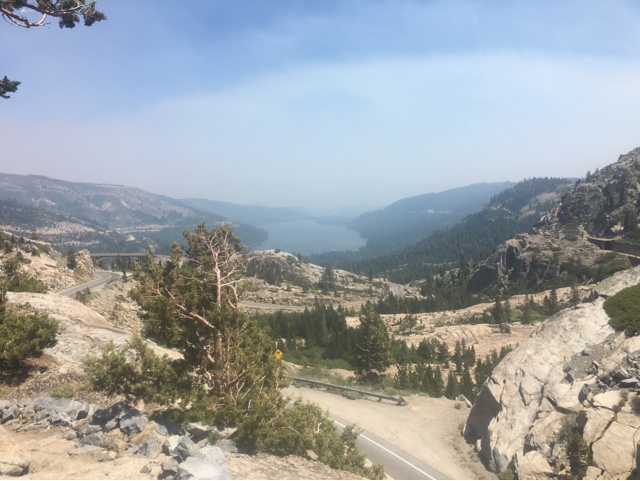 Donner Pass
I made it to the trailhead in under three hours. I searched in vain for the hidden water spigot. I tried pouring the remainder of my water on my pad to find a hole. That also proved to be in vain. My last option was to walk .25 miles down the road to Donner Ski Ranch, a bar and restaurant. I got there just before they opened. As I waited for them to open I threw away my trash and cleaned out my pack. When they finally opened I was given a free beer and the bartender found me a bucket and filled it with water. Armed with said bucket and my beer I set about finding the hole in my pad. It took awhile, but I finally found it. Luckily it was a large slice in the fabric. If it was a tiny hole I might not have been so lucky. I patched it up and went inside for lunch. I made the mistake of getting a chicken tender basket. I don't eat a lot of fried food, French fries excluded, on the trail. Later in the day this would prove to be a catastrophic decision. The bartender had the news on and they were discussing the heat wave. The temperature would climb over 100 degrees by the end of the day. Tomorrow it will top out at 106 degrees. I'm not looking forward to hiking in this heat. 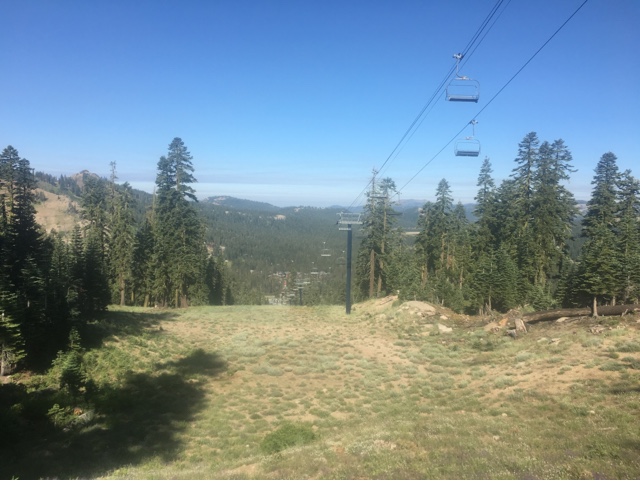 Donner ski area
I didn't get back on the trail until 1:30. It was miserably hot and exposed hiking and the greasy lunch was not sitting well. As I made my first climb uphill I felt very nauseous. I stopped at every water source over the next few miles to hydrate, but I think that made things worse. I was hoping to hike another 12-17 miles today, but when I threw up around mile four I didn't think that would happen. I took the rest of the day slow and took a lot of breaks. 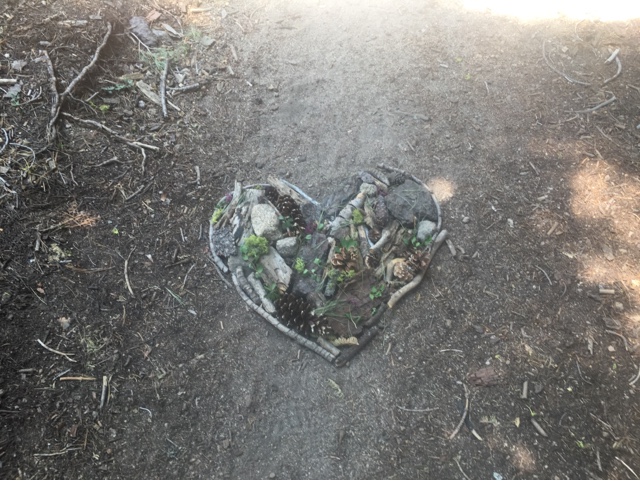 Someone had too much time on their hands
I took an extended break in a tunnel. It was nice and cool inside. The cars driving overhead on Interstate 80 made the whole tunnel shake. I slowly sipped water and as I cooked down I began to feel better. 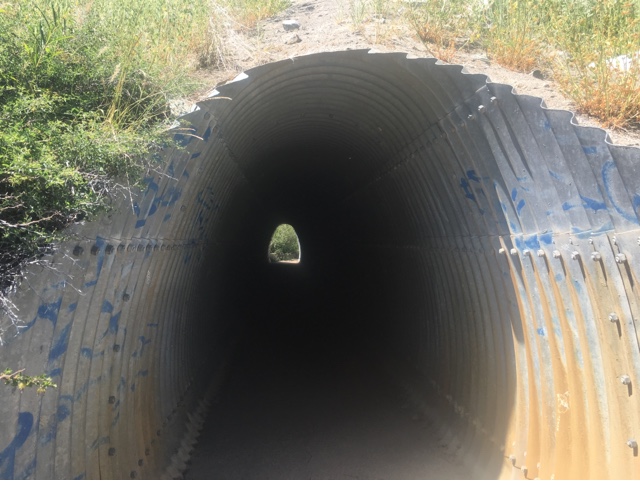 Tunnel under I-80
I hiked another few miles and was surprised to come across a shelter with a privy. I think it is the only shelter on the pct. It was built as a backcountry ski hut and now hikers get to use it as a shelter. 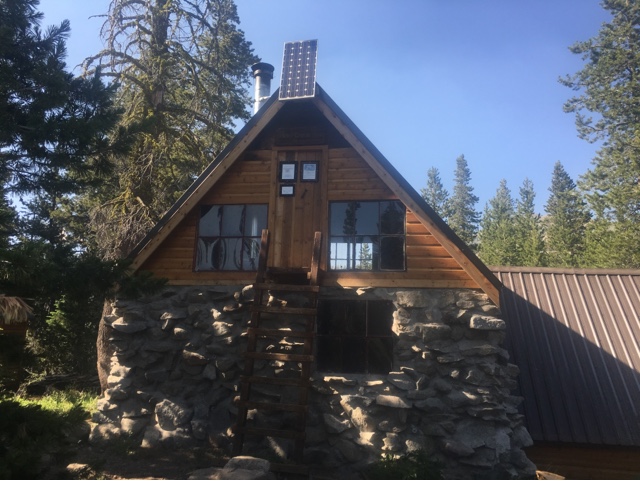 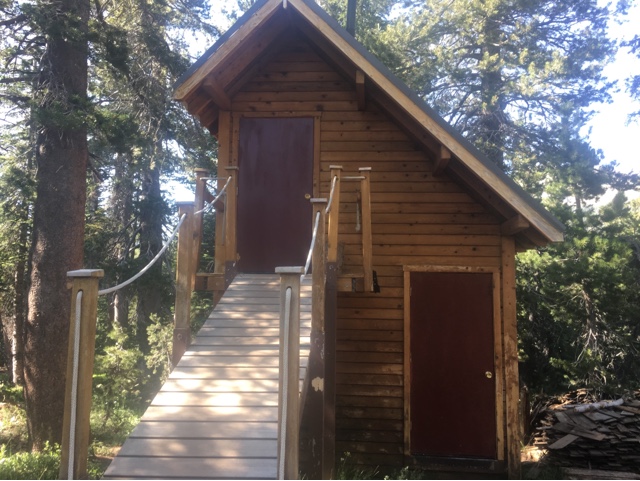 Double decker privy
I could have stayed inside the hut, but it was only five o'clock. I promised myself I would hike until at least six thirty. This would prove to be another bad decision. The next two miles belonged to the mosquitos and biting flies. I ended up camping in between three stagnant ponds. It might have been my worst tentsite to date. I didn't even bother cooking dinner. My stomach was still upset. I forced myself to eat a few bars and went to bed early. The good news is my sleeping pad seems to be holding air and I'm hopeful that the problem has been fixed.
"Perhaps ultimately, spiritual simply means experiencing wholeness and interconnectedness directly, a seeing that individuality and the totality are interwoven, that nothing is separate or extraneous. If you see in this way, then everything becomes spiritual in its deepest sense. Doing science is spiritual. So is washing the dishes.”
– Jon Kabat-Zinn
Posted by Yoda at 8:20 AM