Total up/down: +3187/-4109 feet
I never even heard my watch alarm go off this morning. I woke up and immediately realized that I had overslept. It wasn't too bad though. It was only 6:15. I had feared that it was much later. I quickly packed up and drank my go-go juice (2 Carnation Instant breakfast packs, instant coffee, hot chocolate, and Chia seeds). I was hiking north by 6:45. Before I left I took once last picture of the lake. It was gorgeous. 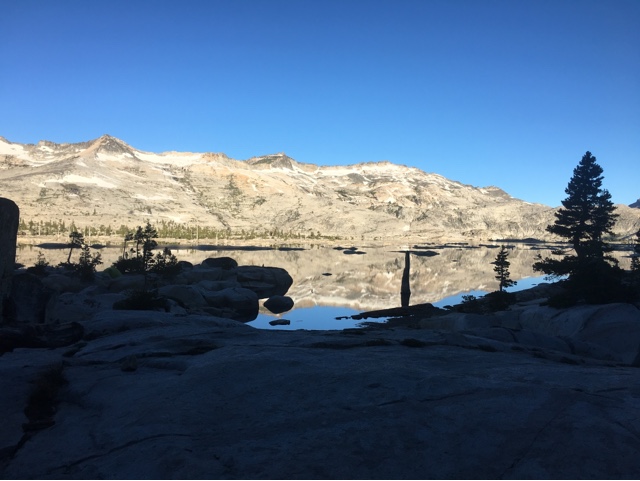 Early morning view
I only had to hike a few miles before I hit the eleven hundred milestone. It was the first time that there wasn't a marker already in place. I took a few minutes to create one. 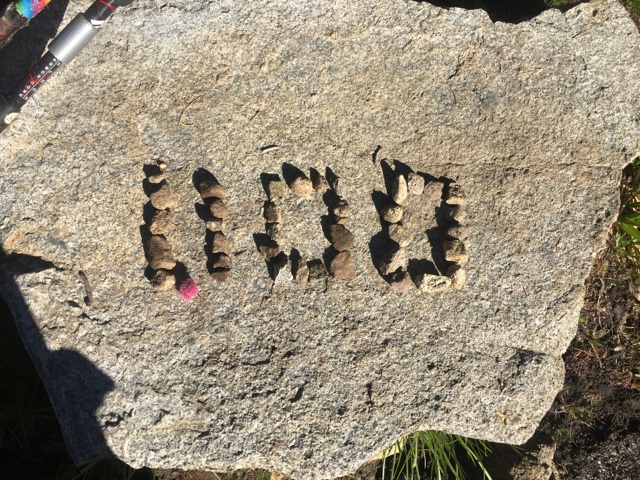 Only 1,560 to go
I can't believe that I still haven't hit the halfway point yet. Oh, well. All I can do is just keep walking. Last night I started hiking in the Desolation Wilderness. I've really been looking forward to this. Everyone says it is a beautiful hike and they were spot on. I spent the day hiking from one lake to another. I must have hiked past fifteen lakes. It was amazing. I really regret hiking past them all. I should have taken the time to swim in at least one of them. I just got so caught up in making miles. I forgot that it isn't just about the miles. It is about the experience. I know there will be other lakes and I vow to stop and jump in as many as possible. Unfortunately, I can't do that during this stretch. I only brought enough food for four days and this section is 103 miles. I have to do 25 miles per day so that I don't run out of food. 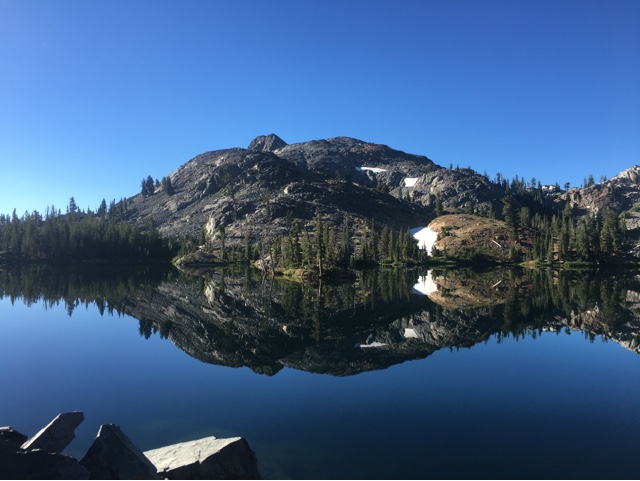 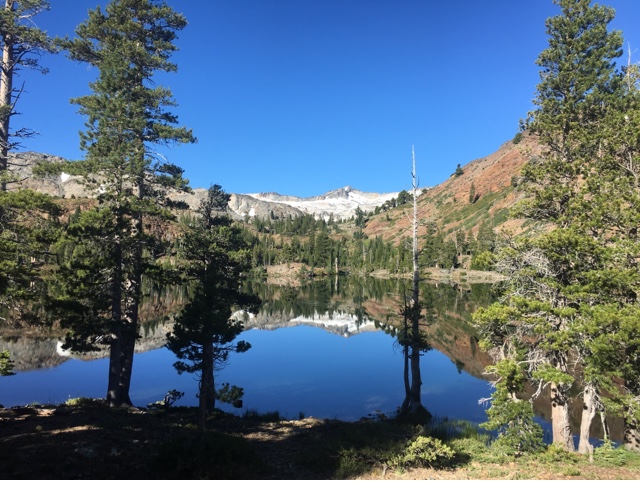 Half moon lake with Aloha Lake in the far distance
By midday it was really hot. I haven't had to deal with heat like this since the desert. Some of the hike was really exposed, but luckily most of it seemed to be through the forest. I stopped to filter water a lot. I think I drank seven liters today. Water is becoming more and more scarce everyday. I have to get better about paying attention to my water sources. It could have been a really bad day for me if it wasn't for all of the lakes. I usually try to avoid drinking from the lakes. I prefer to filter from fast moving streams and creeks, but I think the days of being choosey are over. I'll just take what I can get and hope that they aren't too far apart. 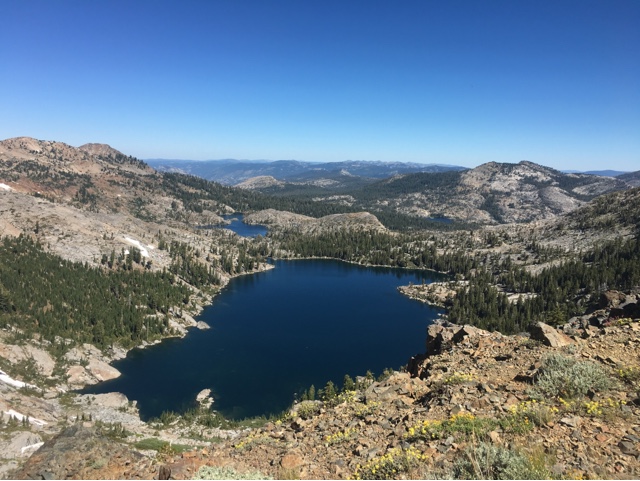 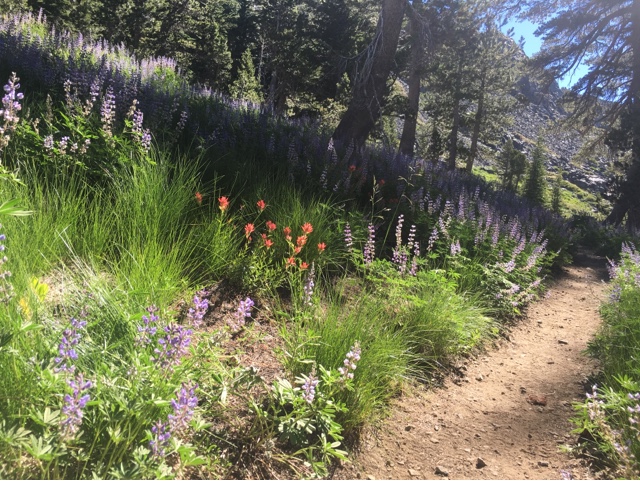 Sweet wildflower bloom
This would be a cool section to hike southbound. The southbounders haven't seen the Sierra yet, so this is their first taste of epic awesomeness. Alas, this is probably my last taste for quite sometime. I hope I'm wrong, but I don't think Northern California will be this pretty. 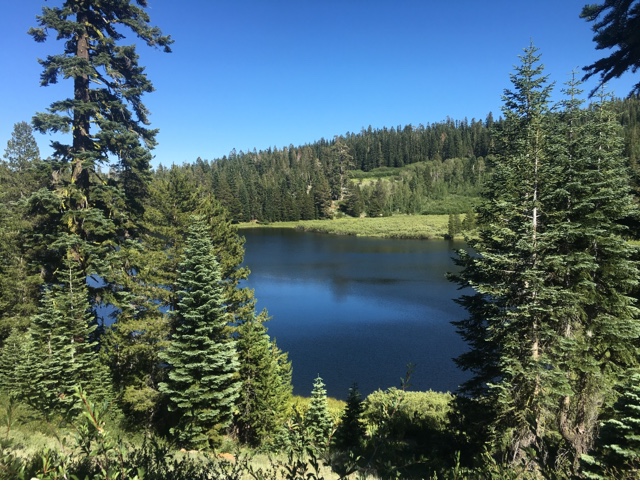 Last lake of the day
By the end of the day I was pretty shot. My knee was starting to act up again so I decided to call it quits. I looked at my map and found a place to camp that had a water source close by. It was only one and a half miles away. I was plodding  down the trail towards my destination  when I saw something strange. It took my brain a second to process what my eyes were seeing. At first I thought there was a dog on the trail, but that didn't seem right. It wasn't until I saw the second animal that my brain snapped to attention. It was a very large bear and a small cub. Just about the time I processed all of this they saw me. Their reaction wasn't the worst thing that could happen, but it was pretty close. The cub ran up the tree immediately to the left of the trail and the momma bear ran to the right. If I went forward I would be in between them. Usually they just run away when they see humans, but the momma bear wasn't going to leave her cub. She started back to the tree where the cub was hiding. I stayed where I was and didn't make any fast movements. The momma bear stood on her hind legs and started huffing at me. I slowly backed away to give them more space. When I got far enough away the cub came down and they ran away.... Or so I thought. They really only went twenty feet to the right of the trail. The momma bear had put the cub up in a different tree and she was trying to hide behind it. As I came around a slight corner(very cautiously I might add) I could see her. Once again see got up on her hind legs and started huffing at me. I was far enough away that I felt confident making a lot of noise and trying to scare them away. It didn't work. She just kept staring at me and huffing. I decided to continue down the trail, but I kept my eye on them. I kept making noise as I went. As I turned a slightly away from them the cub came down and they ran away. It was one of my longest bear encounters and it was super cool. I was a little unnerved by the whole thing, but never really scared. The fact that my chosen campsite for the evening was only .2 miles away was a little disconcerting, but I was hopeful that they wanted nothing to do with me and would not come back. 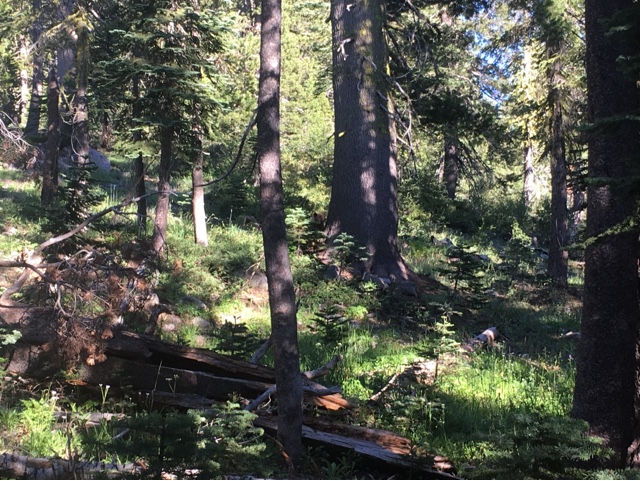 Can you see the bear? It is next to the tree in the middle of the picture. I have an awesome GoPro video that hopefully I can get posted soon
I quickly set up camp, but I went farther away from my tent then usual to cook dinner. I could hear ATVs on some nearby trails so I hope that will discourage them from coming back. Unfortunately, I can't find any trees to hang my food from tonight. I guess I will be sleeping with it(with one eye open).
"Happiness is a butterfly, which when pursued, is always just beyond your grasp, but which, if you will sit down quietly, may alight upon you."
- Nathaniel Hawthorne
Posted by Yoda at 10:37 PM