Day 67- Going Off Of The Trail 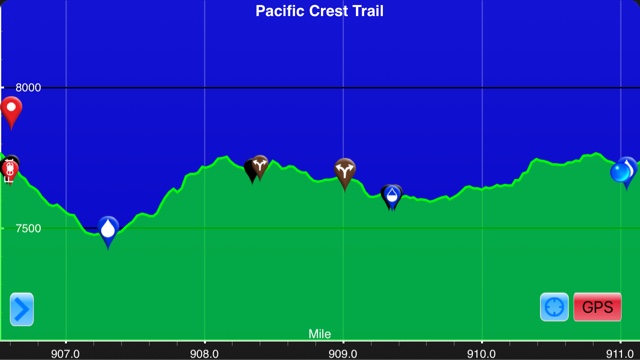 I know that it appears like I didn't hike very much today, but that is not the case. There were a couple of cool side trips right off of the PCT that I just couldn't miss.
For the first time in two months, I really slept in this morning. I didn't get up until eight o'clock. When I finally got up the first thing I did was pack up my stuff. I really wanted to get out of town at a decent time. Shaka cooked us all breakfast burritos again and they were just as good as yesterday's. I'm planning on doing a side trip when I get close to Yosemite Valley, but I hadn't looked up any of the information yet. It took me awhile to tentatively plan out what I'd like to there. Once that was complete I took the trolley into town to get coffee and wifi service. I tried to upload some GoPro videos, but I couldn't get it to work. I'm very frustrated with how I have to upload videos to YouTube before I can add them to my blog. Blogspot doesn't make it an easy process. It is virtually impossible to do from my phone. I have to have access to a computer. Mammoth had a library, but I didn't want to lose more time by going there.
Eventually I lost my patience with the whole thing and I gave up. I went to Subway to get a sub to pack out for dinner. It took me forty-five minutes to accomplish that simple task. The Force was not with me today. Everything was taking twice as long as it should have. I walked down the street to catch a trolley to take me into mountain village so I could take a bus back to the trailhead. The trolley was two minutes early and all I could do was watch it pull away from me while I waited to cross the street. It would be another twenty minutes before the next one came. I tried really hard not to lose my cool. The cards just seemed stacked against me today.
Eventually the next trolley came and took me to the first of two busses I needed to take to get back to the trail. I only had to wait fifteen minutes for that bus to arrive. It was a quick trip to the transfer station where I waited ten minutes for my last bus. I know I shouldn't complain about the bus system. The trolleys were free and the last bus to Red's Meadow was only seven dollars round trip. Without the Mammoth bus system I would have been hitchhiking all through town and I am greatful to have avoided that. Having free transportation around town is part of the reason that I enjoyed Mammoth so much. We were able to do a lot more than we would have otherwise.
The bus to Red's Meadow was packed full of day hikers and JMTers(John Muir Trail Hikers) Like I mentioned earlier, this area is jammed packed with a lot of cool things for me do. The last stop for the bus was Red's Meadow Resort and Pack Station. It was also my destination. We made a lot of stops on the way. After several hours I finally made it back to the trailhead. It was after two o'clock, so much for my early start!
I hiked for less than a mile before I turned off of the trail. The first cool thing to see was Devils Postpile National Monument, a really neat natural geological formation. Wikipedia will probably have better and more accurate information than me, but my understanding is that it is one of the finest examples of natural basaltic columns in the world. The columns were formed by fire and ice(lava and glaciers). A very long time ago lava filled the valley. As the lava cooled, cracks formed on the surface to release tension. These cracks turned into hexagons, natures most stable and efficient shape. All this sciency speak really just means, stuff that looks cool. 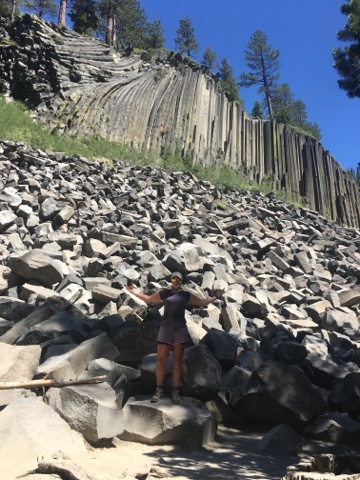 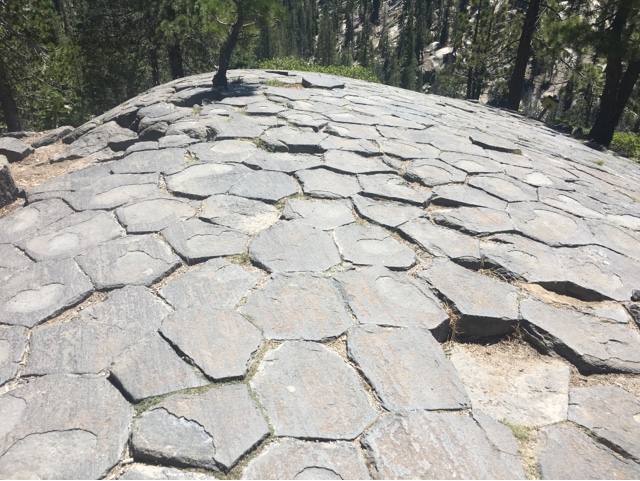 Top of Devils Postpile
I spent over an hour hiking in and around Devils Postpile National Monument. It took me a few miles to get back into the PCT. From the PCT I had a good view across the valley back to Devils Postpile. 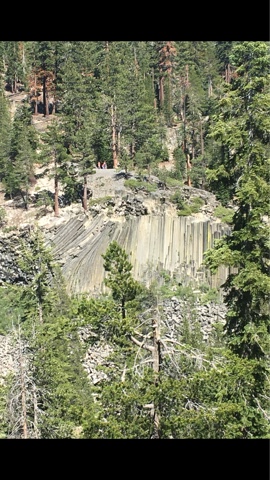 Devils Postpile from a distance
My next stop was Minaret Falls, which was located on the PCT. I hiked off trail to the base of the falls. It was a very nice waterfall, but the picture I took didn't come out. The sun was against the lense. I spent about half an hour there. By the time I started hiking again it was really very late and I wasn't very motivated to make miles. I just kind of sauntered along the trail. I had hoped to hike eight to ten miles, but I found a great tentsite after only four miles. It was close to a river and a car campground. I decided that hiking another four miles wouldn't accomplish much in the long run, so I called it a day. As I was eating my subway sandwich I could hear voices from across the river. It was then that I discovered the campground on the other side of the bridge. There were trash cans, bathrooms, and potable water. Everything a tired hiker could possibly ask for. As I was writing my blog, Sprinkles, Homegrown, Powder, and Action Jackson, showed up. We had a nice dinner together and stayed up past hiker midnight talking.
I really need to do better about getting out of town earlier. Most of my town days have consisted of zeros followed by neros the next day. If I want to finish the trail before winter begins in Washington I need to pick up the pace a little. I'm still planning on taking time off of the trail in Yosemite Valley and taking a double zero for my birthday in S. Lake Tahoe, but after that the shenanigans need to stop. Tomorrow I will enter Yosemite National Park! I am beyond excited for this section. I just got word that Evac, U-Turn, and The Wolf have closed the gap on us and we should see them in Touloumne Meadows in two days. The Wolf Pack is almost reunited!
"We have bigger houses but smaller families;
More conveniences, but less time;
We have more degrees, but less sense;
More knowledge, but less judgment;
More experts, but more problems;
More medicines, but less healthiness;
We’ve been all the way to the moon and back,
but have trouble crossing the street to meet the new neighbor.
We build more computers to hold more information to
produce more copies than ever but have less communication.
We have become long on quantity,
but short on quality.
These are times of fast foods but slow digestion;
Tall man but short character;
Steep profits but shallow relationships.
It’s a time when there is much in the window,
but nothing in the room."
- His Holiness the Dalai Lama
Posted by Yoda at 1:35 PM