Day 62- The One With All Of The Mosquitos 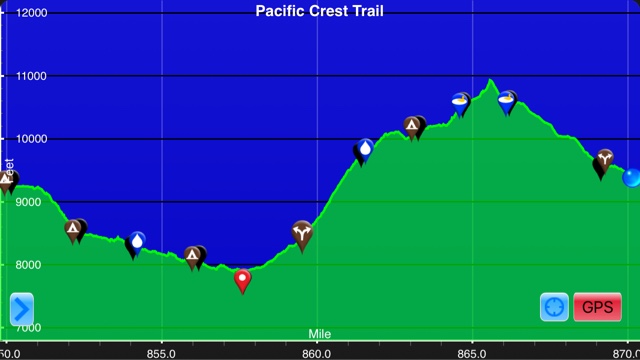 I rather enjoyed today. I had a very Appalachian Trail like climb to get to the top of Selden Pass. The hikers that I blew past were all lamenting the climb. They looked downtrodden and completely beaten by it. Whereas I was rejuvenated. It is rare that I get to climb for an extended period of time through a forest. 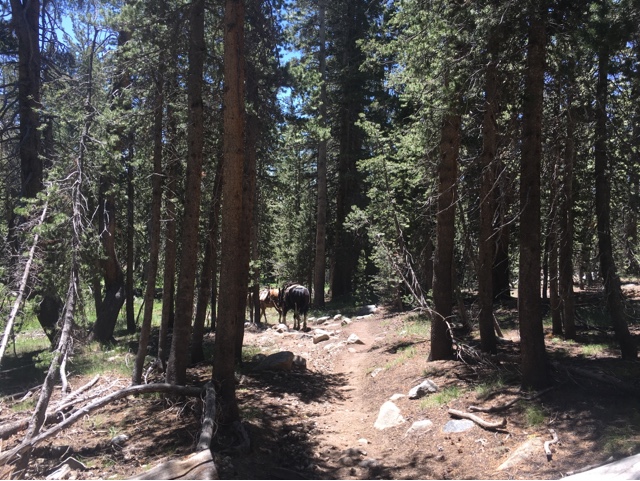 All it's missing is the white blazes
I didn't quite manage to sleep in this morning, but I did stay in bed longer than usual. I was woken up by the sounds of a JMT hiker peeing about five feet from my tent. Seriously dude? You have a whole forest to pee in and you choose right next to my tent. Ugh! Sometimes it is hard to just let things go, but I have learned that it is not wise to get into arguments out here. When I finally did get moving this morning, Zuul and Outro where up as well. We talked about our plans for the day. Outro decided to take a side trip and hike a non pct trail. She will loop back to the pct and meet me in town in a few days. Zuul wasn't quite ready to go and we came up with a place to meet for camp.
The day started with an extended downhill, which is my least favorite way to start the day. The miles went by quickly thanks to Harry Potter and the Chamber of Secrets audiobook I'm currency listening to. There were two huge rivers that I had to cross, but unexpectedly they both had bridges. Bridges on the PCT are a rare treat. 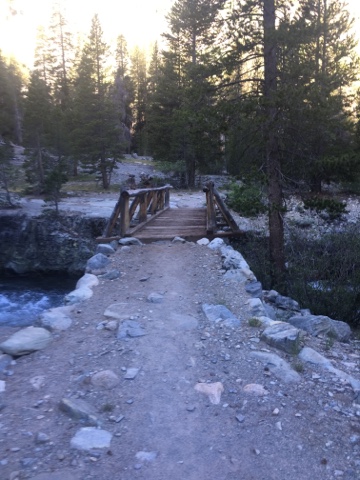 Hooray! A bridge
Within five miles I came across a side trail to Muir Trail Ranch, a popular resupply exit for JMT and PCT hikers. I don't really understand why people choose to resupply there. It costs $75 to pick up your package. To be fair they have to use mules to bring in the mail, so I guess that is a fair price. I chose to skip it and resupply 21.1 miles farther down the trail at a place called Vermillion Valley Resort.
The side trail to Muir Trail Ranch was the beginning of the long uphill climb to Selden Pass. I took a snickers and water break before beginning the climb. As I mentioned earlier I really enjoyed the climb. It was just the right amount of steepness for me. The hike up to Selden Pass was really two separate climbs. The first was steep and had a lot of elevation gain over a short distance. The second one was short and didn't gain much elevation. I took a short break at the top of the first climb to filter water and to have another snack. Before the second uphill started I passed by several beautiful lakes. You can only pass so many lakes before deciding to stop at one. I did just that! I ate lunch and swam in Heart Lake. It was the first time I have really taken a long midday break to just enjoy the scenery. The lake was ice cold, but it felt good to get off all of the grime from the last five days. 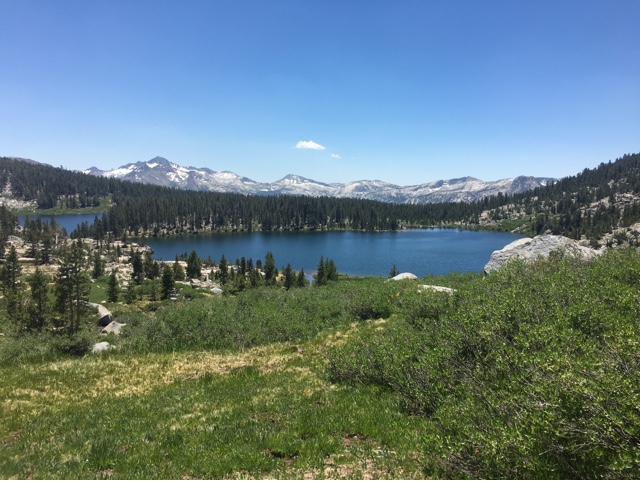 Heart lake
After my lunch/swim break I only had 3.5 miles left to hike for the day. As I was packing up to finish the climb up the pass, Smiles hiked past. I haven't seen her since Forester Pass. She is an amazing young woman with a kind soul. She always brightens my day. By the time I made it up to the pass she had already left. I'm hoping to catch up to her in the next proper town, Mammoth Lakes.
The view from Selden Pass was spectacular. It might not be one of the five major passes of the High Sierra range, but it was just as gorgeous.

Selden Pass
Since I took a long break by the lake I didn't linger too long at the top. I was looking forward to getting into camp early. It was an easy hike down from the pass since there weren't any large snow fields to traverse.

Halfway down the pass
I made it into camp by four o'clock. While I waited for Zuul to show up I began to write my blog. The camp we had decided on was close to a large creek, which meant that the mosquitos were bad. I have never had to deal with mosquitos like this before. I live in Florida and have never had to deal with mosquitos this bad. I have hiked the AT in New England during mosquito season and have never dealt with mosquitos this bad. Within seconds I was covered by them. Deet does nothing to deter them. I put on pants and my jacket to keep the worst of them away. I carried a bug headnet for the entire 2,189.2 miles of the AT, but I never used it. Well, I finally couldn't take it anymore and had to use it. I waited for Zuul until 6 o'clock and she never showed up. A few passing hikers told me they saw her at the Muir Trail Ranch. I felt bad about leaving, but there was no way I was going to camp there. I decided to hike another mile and cross Bear Creek. Bear Creek is one of the wildest river crossings in the PCT. Most people wait until morning to cross because it can be dangerous. I wouldn't have crossed it by myself, but there was a couple who went across minutes before me. It didn't look too treacherous so I went for it. It was fine. The current was a little stronger than Evolution Creek from yesterday, but it wasn't as deep. 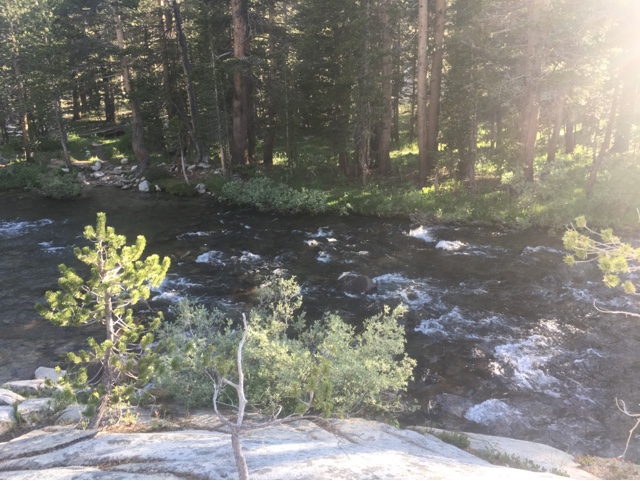 Bear Creek
The mosquitos were even worse at Bear Creek. Apparently I wouldn't be camping there either. I didn't even stop to change back into my hiking shoes, I just kept on my Luna's and ran. Everywhere I wanted to stop was fully enveloped by blood sucking monsters. Eventually I had to pick a place to stop because it was getting late. I tried to find a location far away from water, but this valley I'm going into is water rich. There are stream and creeks everywhere. I finally found a grassy spot just off of the trail. It was also lousy with skeeters, but I have to sleep somewhere. I cooked dinner in pants, long sleeves, gloves, and my headnet. I ended up eating inside my tent. I can look forward to nights like this for a longtime to come. 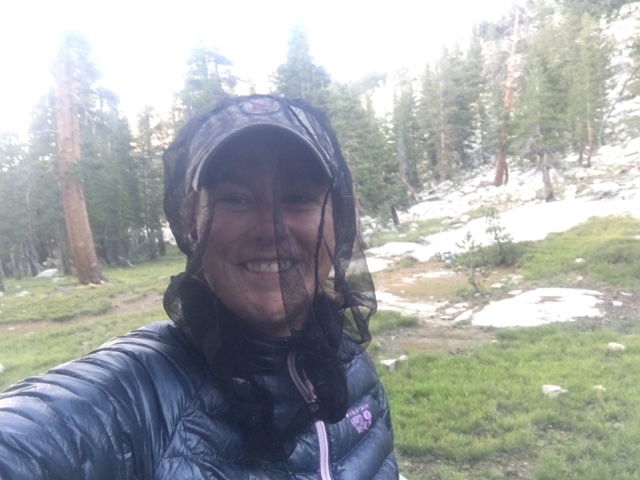 Not sure why I'm smiling
Tomorrow I'll be in "town". Vermillion Valley Ranch(VVR) isn't exactly a town. It is just a resort in the middle of nowhere. I'll be happy to get a burger and chocolate milk. I'll also be pleased if I can take a shower and do laundry.
"Before you can live a part of you has to die. You have to let go of what could have been, how you should have acted and what you wish you would have said differently. You have to accept that you can’t change the past experiences, opinions of others at that moment in time or outcomes from their choices or yours. When you finally recognize that truth then you will understand the true meaning of forgiveness of yourself and others. From this point you will finally be free."
-Shannon L. Alder
Posted by Yoda at 12:46 AM