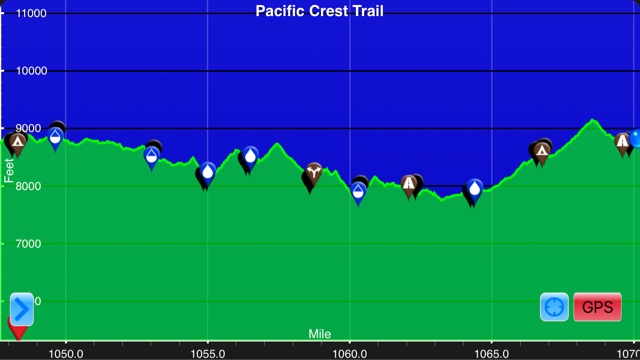 Total up/down: +4059/-4013 feet
The wind continued throughout the night and did not stop for the entire day. Luckily, I stayed warm last night and the wind didn't interrupt my sleep too much. I felt well rested and ready to hike this morning. I ate my poptarts and headed out rather quickly. It was super chilly with the wind and it took me forever to warm up. Usually if it is cold in the morning I start hiking in my rain jacket. I usually regret this decision as I get overheated very quickly wearing it, but not today. I kept it on for almost two hours instead of twenty minutes. I decided early on to hike with as few breaks as possible. My normal routine is to hike for two hours and then take a twenty minute break. I'll continue this schedule until noon when I take a forty-five minute lunch break. Then I'll take a ten minute break every hour. Since I'll be back in the desert soon I want to take less breaks in the morning. Today I hiked for three hours without taking a break. When I finally stopped it was a quick ten minute break to filter water. For the first time since leaving the desert I hiked ten miles by ten o'clock. Today actually reminded me of the desert. It was really windy and instead of climbing big mountain passes I followed the contours of mountains. The scenery changed from one mile to the next. Sometimes resembling the Sierra and sometimes it was bleak like the desert. 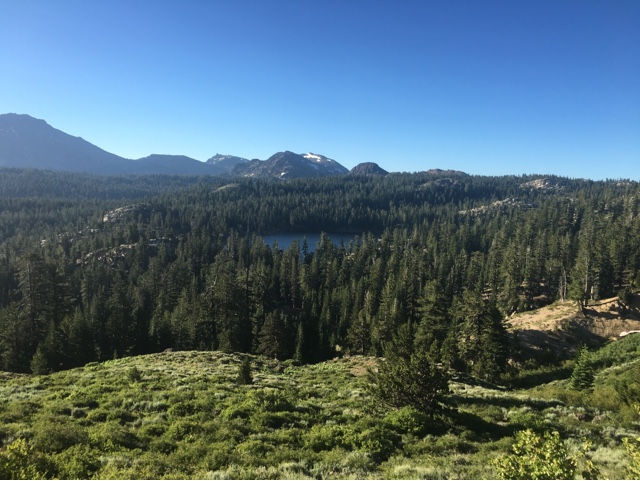 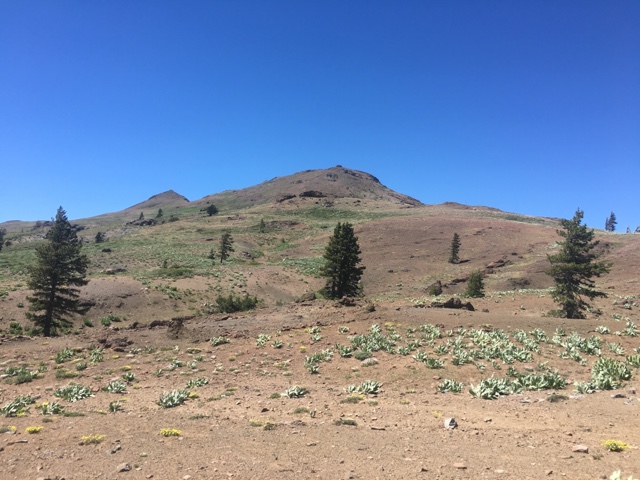 Typical desert view
The official end of the Sierra is at Donner Pass around mile 1150, but everyone consider S. Lake Tahoe at mile 1090 as the end. The terrain is starting to feel more desert like and the water isn't as plentiful. Not only was I fighting the wind all day, but I was fighting my instincts. I wanted to do a big mile day, but I was hiking too fast for my scheduled plans in Tahoe. I thought about getting to Tahoe a day early, but I just can't afford four days in town. Towards the end of the day I had a very exposed ridge to walk and the wind was really whipping me around. I came close a few times to being blown over the edge. 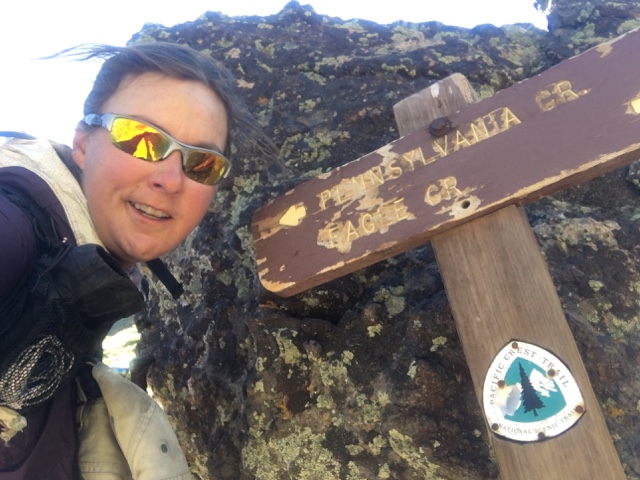 Very windblown
I made it into camp at three-thirty. I really wanted to hike until at least five thirty, but then I would have a ridiculously short day tomorrow. In the end I decided to stay put. I killed time by hiking around a lake close by camp. It was fun to hike off trail for a little while. At first I was worried about getting lost, but I have a gps app on my phone that almost guaranteed that wouldn't happen. 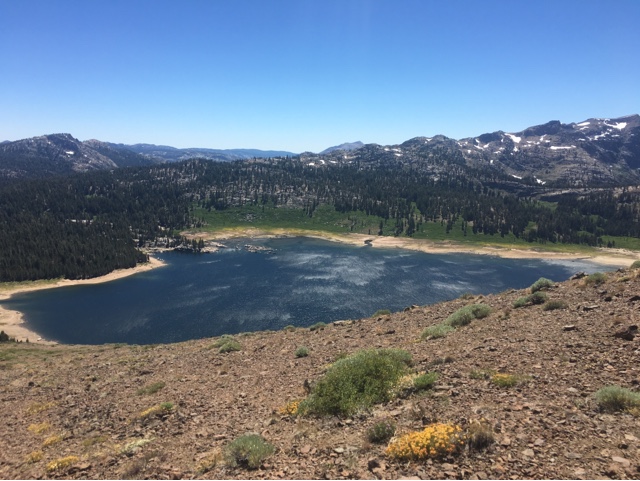 Off trail hike. Can you see what the wind is doing to the water?
I made it back to camp around five o'clock. I set up as quickly as I could. The wind was so strong it made it very difficult to set up my tent. As I was cooking dinner, Shimmy and Cupcake showed up. I've been hiking around them since I left Kennedy Meadows. Cupcake is getting off of the trail in S. Lake Tahoe. She just isn't enjoying the hike anymore. Tahoe is a major quitting point for a lot of aspiring thruhikers. The thought of heading back into the desert for another five hundred miles is depressing. I know that I'm not looking forward to Northern California very much. My plan is to get through it as quickly as possible. If the terrain is anything like today I'm hoping to average twenty five miles per day until Washington. Oregon is supposed to be pretty easy, with thirty mile days being a real possibility. After my luxurious birthday in Tahoe I hope to almost eliminate zero days for a long period of time. I went slow through the desert hoping for better conditions in the Sierra. That worked out perfectly. I went slow through the Sierra so that I could take it all in and enjoy the wondrous beauty. That also worked out perfectly. I see no reason to slow down for N. California.
The terrain today wasn't easy by any measure. The elevation profile pictured above doesn't do it justice. Instead of having a few big climbs, the day consisted of a lot of piddly ups and downs(PUDs). Days like this were very common on the Appalachian Trail. We referred to them as pointless ups and downs(PUDs), but as my friend Airlock used to say, "Aren't they all pointless?". Ever since her pointing that out I prefer to call them piddly. The overall elevation change still added up to a lot of climbing up and down. Most of the hikers, including Shimmy and Cupcake, seemed very put off by this and thought that it was a very difficult day. I guess we just have a different perspective on difficult days. It is for reasons such as this that I am glad that the AT was my first thruhike. I think it has made me a better and stronger hiker. I'm just thankful that I don't have to hike in the rain and humidity everyday. The views are a little better out here too! 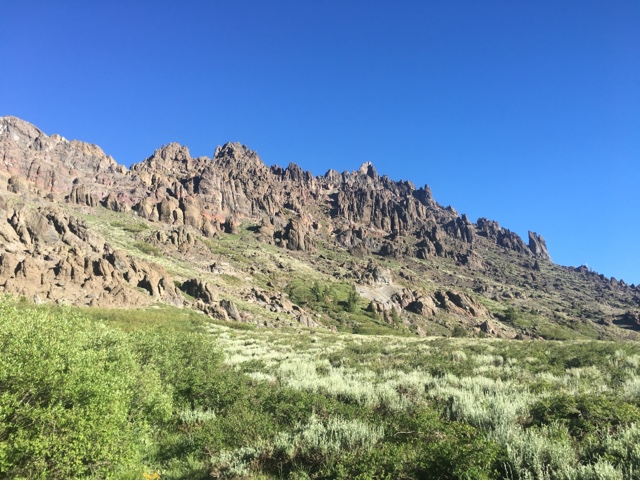 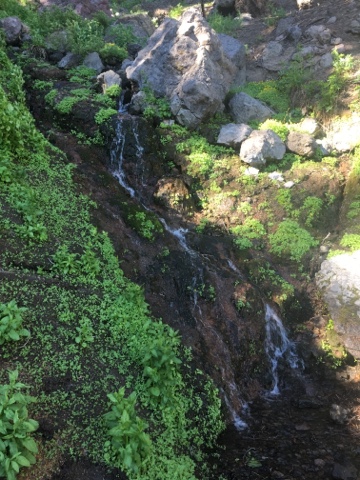 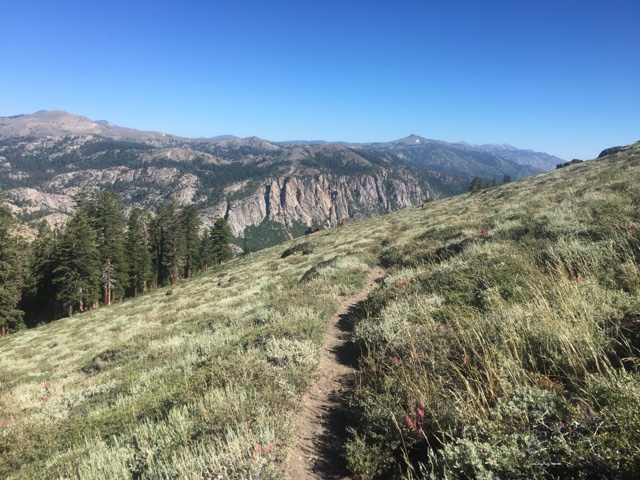 Very windy exposed ridge
"Wander here a whole summer, if you can. Thousands of God's wild blessings will search you and soak you as if you were a sponge, and the big days will go by uncounted. If you are business-tangled, and so burdened by duty that only weeks can be got out of the heavy-laden year ... give a month at least to this precious reserve. The time will not be taken from the sum of your life. Instead of shortening, it will indefinitely lengthen it and make you truly immortal."
- John Muir
Posted by Yoda at 7:27 AM