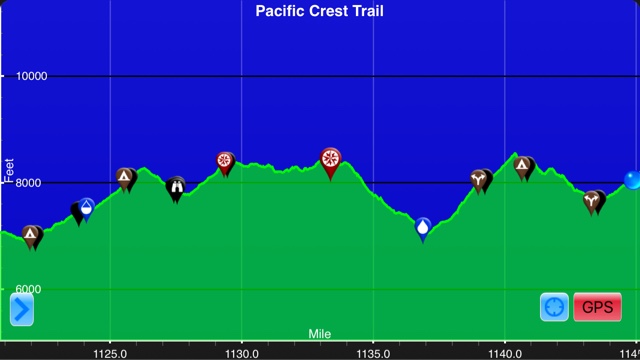 Total up/down: +4312/-3605
I never really worried about finishing the AT before winter started in Maine. It was never a consideration. I hiked whatever miles I felt like. This hike is completely different. I set out from Tahoe planning to hike 25 miles per day because I felt like I was falling behind. I keep hearing that I am at the tail end of the bubble for this hiking season. The pressure to finish before the weather turns ugly is real. I don't like"having" to hike a certain mileage day in and day out. I prefer to let the terrain dictate my daily mileage.
I woke up this morning dreading the day ahead of me. I just couldn't make myself motivated which is strange because usually I like to challenge myself. I think it is the pressure of having to do something. I had a quiet night in camp. The bears did not return to check on me. The air was crisp which is perfect for hiking. Within two miles I came to a trailhead parking area that had a privy. I was happy to not have to dig a cathole. It was shaping up to be a great day. I banged out the first six miles rather quickly. The terrain was cooperating nicely. I was worried that it might rain, but when I got up above tree line I could see that it wasn't rain clouds that I was seeing. It was smoke. I became nervous that there was a fire close by. 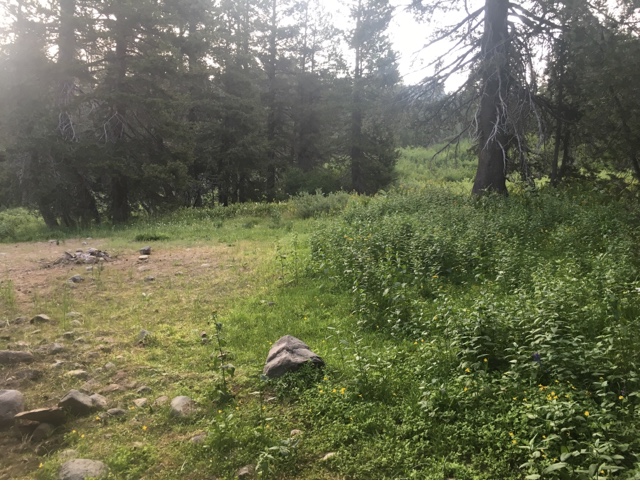 Bear free campsite
I checked my phone to see if I had service and lo and behold I had great reception. I noticed a text message from my dad. I had made a major mistake with having him ship food for me. I had forgot to tell him about my next stop in Belden. I had told him about another mail drop 150 miles farther down the trail. Luckily he was on top of things and noticed the mistake. If he hadn't caught the error I would have been majorly screwed. I asked him to check on any fires in the area. He got back to me that everything was good. I would find out later that the smoke I was seeing all day was coming from a fire in Agua Dulce. I hope the Saufley's are ok. 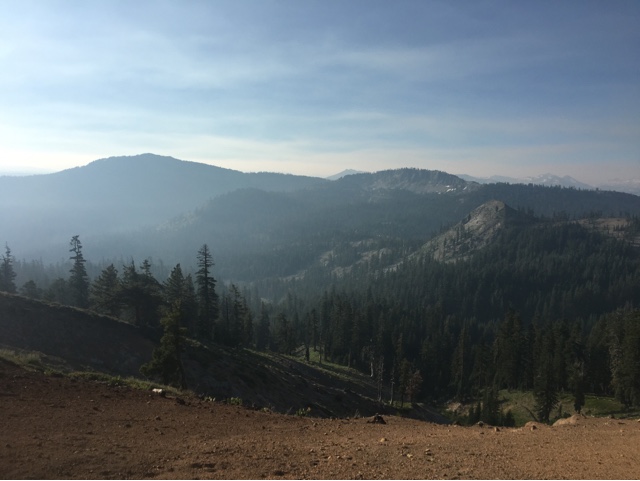 Hazy scenery
I spent the next several miles walking a ridge above tree line. I wish it wasn't so hazy out, but the views were still nice. I could even see Lake Tahoe a little bit. The ridge I was walking is part of the Sqaw Valley ski resort. I wonder if people realize that they are skiing and snowboarding over part of a national scenic trail. Probably not. 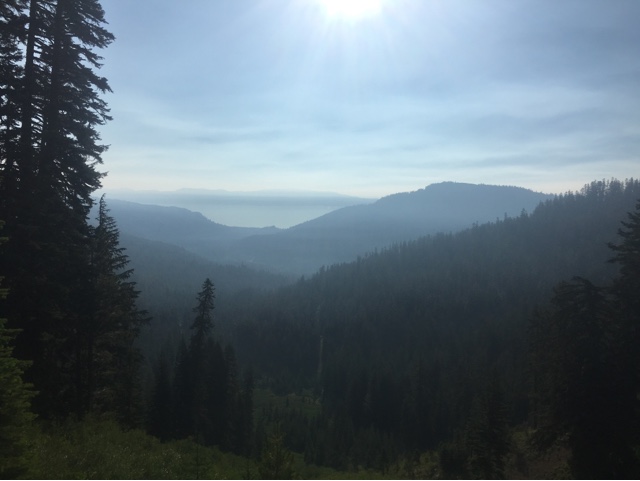 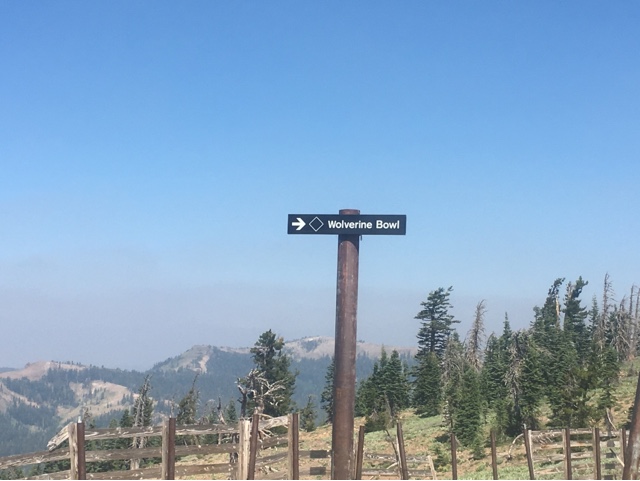 Such a cool name for a ski run 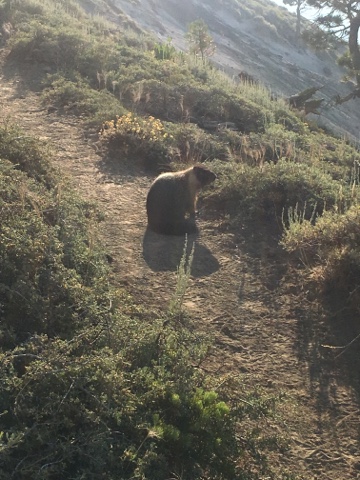 Close encounter with a marmot
Shortly after walking the ridge my excitement bargain to wain. I knew I was behind schedule for the day, but I just couldn't make up any time. It was extremely hot out and the miles were passing by slowly. I was still on track to make twenty five miles at noon, but by one o'clock I had fallen behind the curve. Unfortunately, at that time I was also walking through an extremely exposed section and the heat was really getting to me. I kept having to take short breaks in the shade to cool down. I was also drinking a ton of water. I think I stopped at almost every stream today. Filtering water is not a quick process. It takes time. Time that I didn't have today.

Not a lot of shade
Around three o'clock I had a tough decision to make. I was coming up to a ten mile dry stretch. I had to decide to stop early and camp close to the water source or to go farther and dry camp. If I went farther I had to carry at least three liters of water up a thousand foot climb. If I camped close to the water source I would fall behind my goal of twenty five miles for the day. I discovered last night that I had packed an extra day of food, so that wasn't a concern. I'd really like to catch up with Outro, Evac, and U-Turn, but I know that Homegrown, Sprinkles, and Wolf are right behind me. I couldn't make a decision. I decided to hike until I got to the water source and then decide. 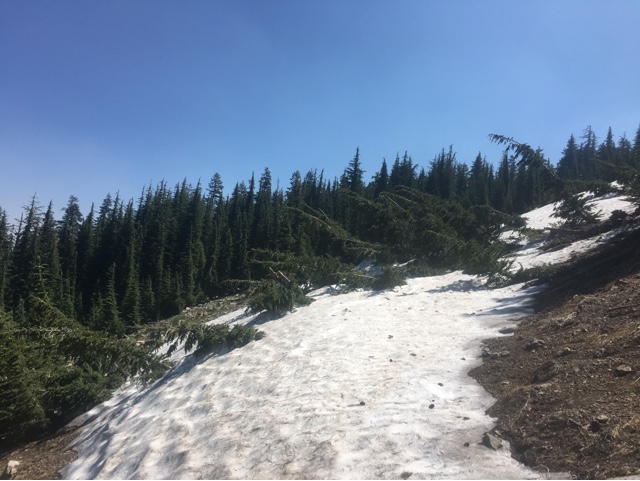 Imagine the kind of wind needed to do this to trees
The last water source of the day was midway up a thousand foot climb. My decision was made for me before I got to the water. Before I started the climb to the water I had a very long downhill to contend with. Just as I made it to the bottom my knee really started to hurt again. Every step was causing me a searing pain. There was no way I was going any farther than the water source. To my dismay the water source was a tiny stream with no camping close by. I regretfully filled up three liters and prepared to hike another three miles. My dismay turned to elation a quarter of a mile later. I found a nice flat stealth spot tucked away right off of the trail. I set up camp and cooked dinner nestled in a tiny spot under a big tree. Several people hiked right past me and never saw me there. As a bonus I had great cell reception. I almost forgot what it is like to have reception while on the trail and in camp. I was able to update my blog and to check some of my email.
I'm hoping tomorrow will be a better day. I really want to start doing big mileage days. I just need to find a new way to motivate myself.
"We are what we repeatedly do; therefore excellence is not merely an act, but a habit." Aristotle
Posted by Yoda at 9:14 AM