Day 65- Just The Thought Of Town 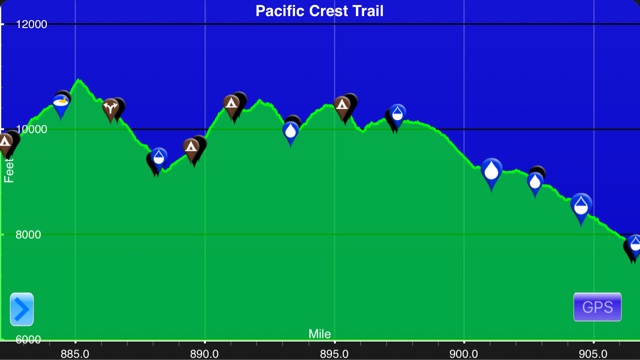 I didn't have much of a plan when I woke up this morning. I was very much undecided on making it into Mammoth Lakes by the end of the day. It got really cold last night and that always makes it hard to get out of my sleeping bag in the morning. I was determined to conquer Silver Pass, which had utterly defeated me the day before. I had my new favorite breakfast of vanilla carnation instant breakfast with powdered milk, instant coffee, and hot chocolate. I powered through the climb without any problems. The top of the pass greeted me with a stunning view. 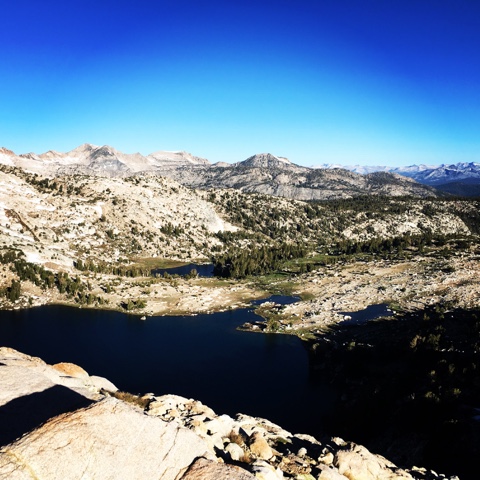 View from Silver Pass
On the way down I had to navigate a few snow fields. One was perfect for glissading, but it was too early in the day for it. To glissade safely the snow needs to be slushy not icy. I didn't really need to use my microspikes, but I put them on anyway. They allow me to go a little faster on the icy terrain.

Looking up to Silver Pass from the south side
I spent most of the morning walking through sprawling meadows and forested mountainsides. The trail was a mix of minor ups and downs with a good bit of contouring thrown into the mix. I was making really good time and for the most part the miles were coming easily. 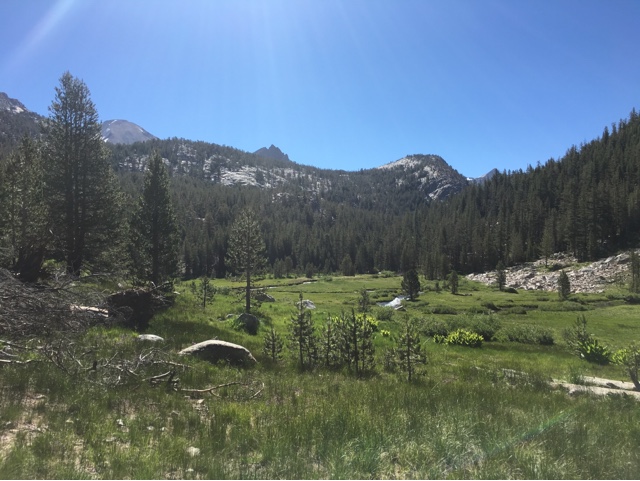 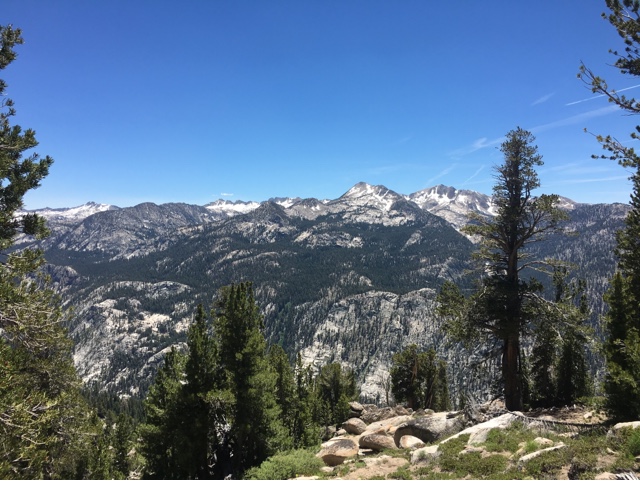 Snow capped mountains
I ate a quick lunch by an alpine lake. There were several creeks and streams flowing into the lake and I had to stop and change into my Luna sandals to make it across. During my lunch break I got out my maps to plot out the rest of my day. I was only fifteen miles from town, but I had already done almost ten miles. I still wasn't convinced about hiking all the way to town by the end of the day. Mammoth Lakes is located off of the trail and involves a bus ride to get to town. I also don't like to get to town late in the day. In my opinion it is a waste of money on lodging. I decided to play it by ear, but to keep the high intensity pace up. A JMT hiker gave me a new kind of bar to try. I have had Pro Bars before, but have never tried Pro Bar Base bars. She gave me a coffee espresso flavored one with caffeine. It was delicious and the caffeine gave me a huge boost. I think it is my new favorite bar. I kept up a very fast pace for the next hour. I came close to hiking four miles per hour, which is very fast for me unless I'm road walking. I was in the zone. So much so that I almost blew right past the 900 mile mark. The mile marker was already made, but I thought it was very subpar so I took a few minutes to make my own. I guess I'm out of practice because mine wasn't much better than the original. 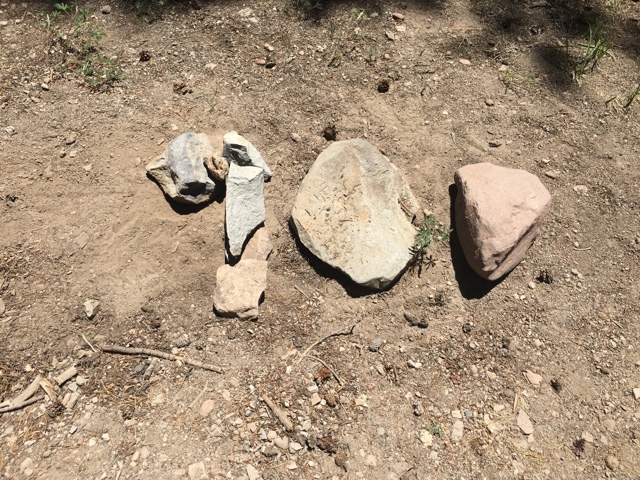 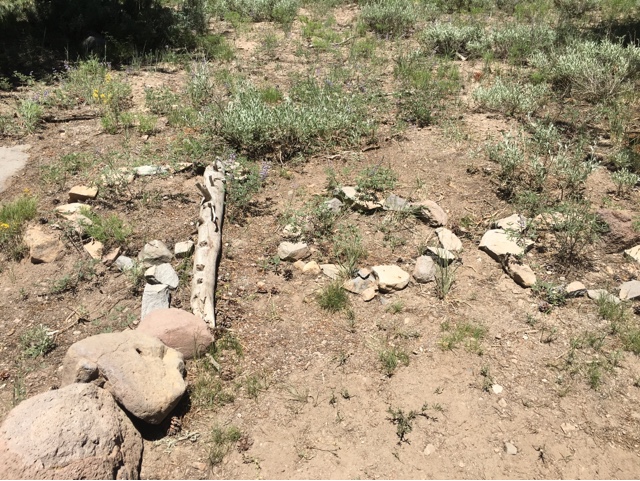 Original 900 mile marker
While I was making the mileage sign I had enough time to reevaluate my plan. I was only 6.7 miles from the turnoff for Mammoth Lakes. If I kept up a quick pace I could make it there by 4:30. Normally I would camp just short and go into town the next day, but VVR was so disappointing I decided to push for town.
A few miles later I passed the point of no return. There were no more camp spots between that point and the town junction. My energy level was fading fast and after almost 4,000 feet of elevation loss for the day my knees were screaming. I forced myself to push through the pain and to keep up a semi-good pace. When I passed by a train of horses and pack miles I knew that I must be getting close to my goal. The last mile seemed to take forever, but when I saw Reds Meadow through the trees I had a final burst of energy. I had hiked 24 miles before four thirty. I was very pleased with myself. I even made it just as a bus was arriving. To make things even better I had returned to the land of cell phone coverage. I had over forty text messages and a hundred emails. One of the messages was from Sprinkles and Homegrown. They were in town and had a free place for me to stay! My hard work had definitely paid off. 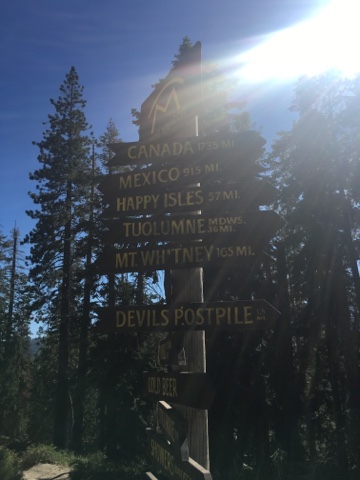 Reds Meadow
Getting into Mammoth Lakes was a complicated affair. It involved a few busses and a trolley. After a few hours I made it to the condo where Homegrown and Sprinkles were staying. Our friend Second Dinner(Shaka) had been gifted an eight person condo in the ski town of Mammoth Lakes for a few nights. I was the last person there. Second Dinner, Homegrown, Sprinkles, Flop, Lapsang, Tie Dye, Action Jackson, and Risky Biscuit were already there. Risky was a gentleman and offered to sleep on the couch so I could have a bed. I showered as quickly as I could. It had been awhile since I had last showered. After getting cleaned up I joined the gang in having a few beers. Mammoth Lakes has a great bus system that is completely free. We hopped on a trolley in search of dinner. We ended up at a local pizza restaurant where we found a lot of other hikers enjoying pizza and beer. We completely overran the restaurant. If I had to guess there were at least forty hikers there. Some were very intoxicated, others were very smelly and dirty. Everyone had a great time. I didn't get back to the condo until after eleven o'clock. It was an exhausting day, but well worth the hard work.
"The snow on the high mountains is melting fast, and the streams are singing bank-full, swaying softly through the level meadows and bogs, quivering with sun-spangles, swirling in pot-holes, resting in deep pools, leaping, shouting in wild, exulting energy over rough boulder dams, joyful, beautiful in all their forms. No Sierra landscape that I have seen holds anything truly dead or dull, or any trace of what in manufactories is called rubbish or waste; everything is perfectly clean and pure and full of divine lessons. This quick, inevitable interest attaching to everything seems marvelous until the hand of God becomes visible; then it seems reasonable that what interests Him may well interest us. When we try to pick out anything by itself, we find it hitched to everything else in the universe."
-John Muir
Posted by Yoda at 12:28 PM