Day 82- Breaking Away From The Tahoe Vortex 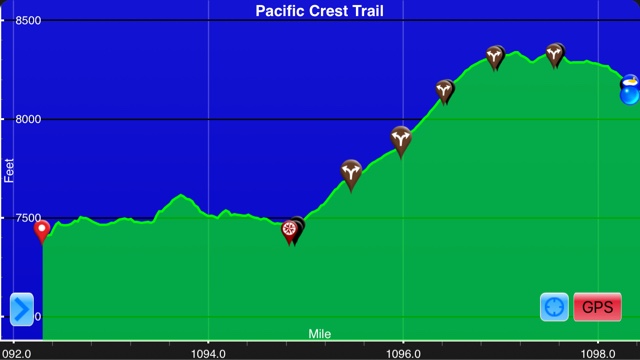 Total up/down: +1558/-793 feet
It was very difficult for me to break free from the town vortex. I don't remember it being so difficult on the AT. Checkout at the motel wasn't until noon, so I took full advantage of that. I slept in until eight thirty and stayed in bed until nine. Eventually I got up and took a shower, my third in as many days. I took my time packing up and went to Pogo and Painters room to say goodbye before leaving. The bus was running extremely late and I had to wait almost an hour. I went to Starbucks to take advantage of their free wifi. I got some stuff done for the blog and downloaded a new audiobook to listen to. Thanks Ed Carmien for gifting me American Gods, by Neil Gaiman. I'm looking forward to listening to it. I went back to Taco Bell for lunch. I was looking for something cheap and easy and it fit the bill. Before heading back to the trail I talked to my Aunt and Uncle for a little while. They are always so supportive of everything I do and it was great to catch up. I tried calling some of the trail angels to get a ride back to the trail, but since it was two o'clock on a Saturday afternoon I didn't have very much luck. I finally resigned myself to the fact that I had to hitch so I found a good spot and went about my business. I had an old guy in a Porsche stop to ask me if hitchhiking actually worked, but he didn't have room for me in his car. It was strange to say the least. About twenty minutes later a lady stopped to ask where I was going. She had a few errands to run, but said if I was still there when she was done she would give me a ride. Twenty minutes later I had a twenty something kid pull up and offer me a ride. I should have followed my instincts and said no, but I was eager to get back to the trail and it was very hot out. I've lost track of how many times I have hitched. It has always worked out ok and I've never had a bad experience. I guess my luck finally ran out. It was a very sketchy twenty-five minute ride back to the trail. As soon as we got out of town the kid started smoking pot and cracked open a beer. He said a few things that I didn't appreciate and eventually I told him to just drop me off where we were. As I was getting out of the car he handed me a few condoms and said I should give him a call next time I was in town. Uggh, gross. Luckily, I was only a mile away from the trailhead so I didn't have to walk far. Let that be a lesson. If you have a bad feeling about something you should act on it. I will be going back to my standard of only accepting rides from women and grandfatherly type men and I will be invoking the "Yoda protocol" once again.
I got to the trailhead parking lot just in time for some trail magic. Since I had just come from town it didn't feel right to take the hamburger and beer that was offered to me, but I couldn't refuse the watermelon. I scarfed down a few slices before heading out. I had planned on hiking eight miles, but it was already four o'clock so I wasn't to sure I could make it that far. After only two miles I made it to Echo Lake where there is a small store. I stopped in for a soda because what thruhiker can turn down an ice cold soda. By the time I started hiking again it was five o'clock and all thoughts of going another six miles had vanished. 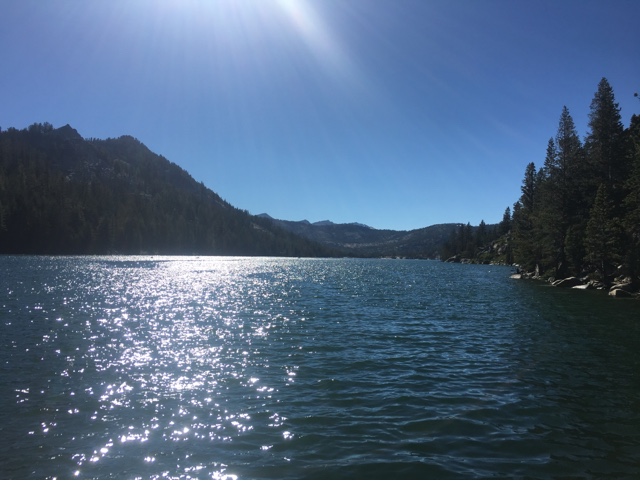 Echo Lake
What I hadn't counted on was the utter lack of water. I hiked around the lake, but I couldn't filter water from it because of the motor oil in the water. There were a lot of boats on the lake and I'm not sure if my filter can handle that. The hike around the lake was extremely hot and the Coke had left me very thirsty. I had no choice, but to hike the full eight miles that I had planned to hike.
The good news was that it was totally worth making those extra miles. Aloha Lake was gorgeous. I made it there just before sunset! 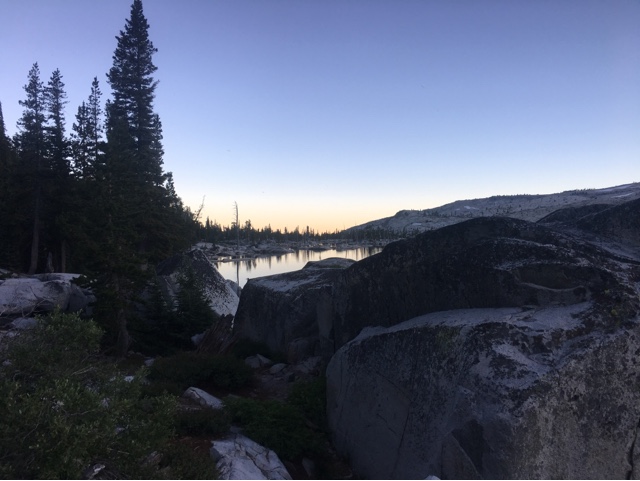 Aloha Lake at sunset
I really don't like getting into camp so late, but since I had slept in the last two mornings I wasn't very tired yet. I quickly set up and filtered water while it was still light out. I even managed to get dinner cooked before it was totally dark. I think this has to be one of my favorite campsites so far. After dinner I sat by the lake and soaked my feet. Since the lake is so shallow it wasn't very chilly. I stayed up past ten o'clock reading a book on my phone. I haven't done much reading this trip and it was a nice change of pace. 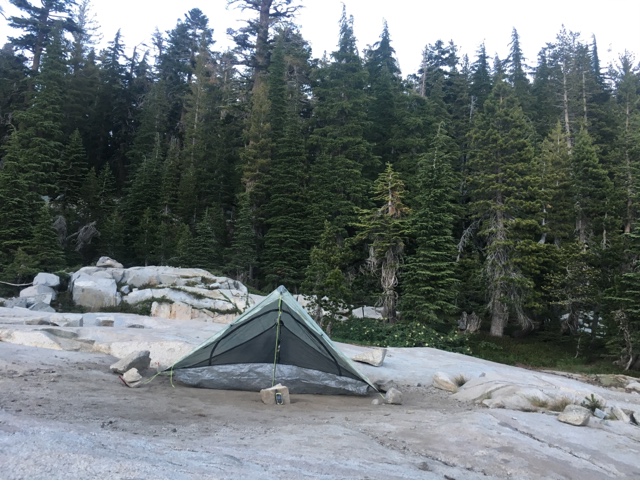 Zpacks Soloplex Tent by the lake

Beautiful
I'm hoping to pull some high mileage days over this next stretch. I'd like to catch up to Evac, Outro, and U-Turn, but they will be doing high mileage days as well. Sprinkles and Homegrown are a day behind as well, but I think they will probably catch up to me in the next week.
"Between stimulus and response there is a space. In that space is our power to choose our response. In our response lies our growth and our freedom.”
– Victor Frankl
Posted by Yoda at 9:12 PM