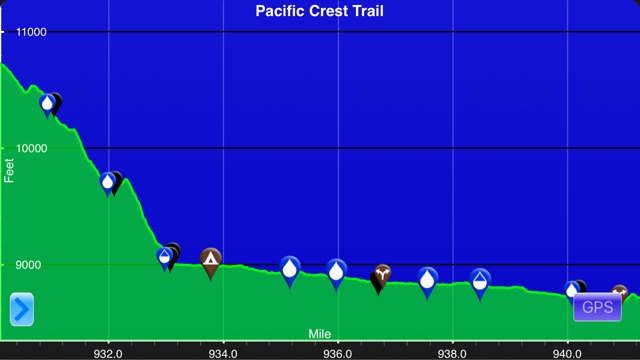 Wow, it was really cold last night. It was the coldest night of The Sierra, but I managed to stay warm. Although, it took me forever to talk myself out of my sleeping bag. I finally heard Sprinkles and Homegrown moving around so I decided it was probably time to start moving. I didn't waste much time packing my things up. After two hundred and thirty miles, with the bear can, I finally have my morning routine down. Homegrown, Sprinkles, and I hiked out together. The first two miles were murderous for me. My knee is extremely angry right now and it especially doesn't like hiking down hill. For two miles we went straight down walking over tiny rock steps. I had trouble keeping up with Homegrown's long stride and Sprinkles mountain goat like ability. Lucky for my knee it was all over quickly. The last nine and a half miles into town were some of the creamiest miles I've ever hiked. We hardly went up or down. Check out the elevation profile above. It was almost like a road walk. We passed through several amazingly wondrous meadows. 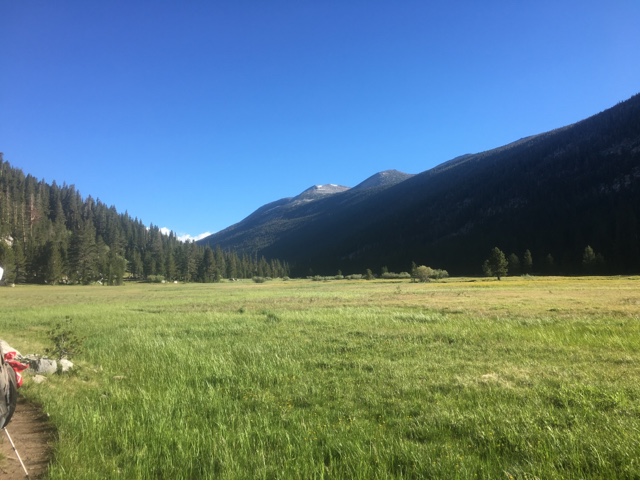 Look at all of the grass
Most of the meadows had a stream running through. Sometimes it was barely flowing, other times it was like a lazy river or even a small rapid. I have never seen anything quite like this stretch. 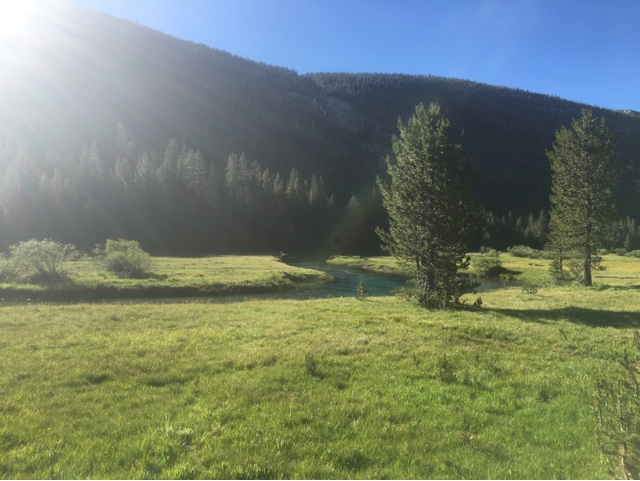 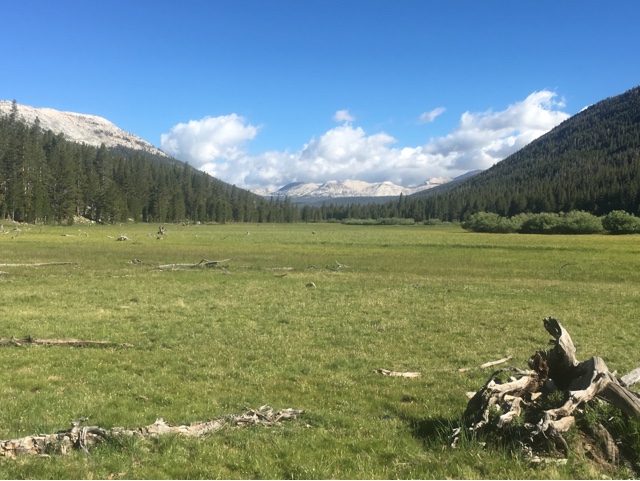 Domes of Yosemite visible through the meadow 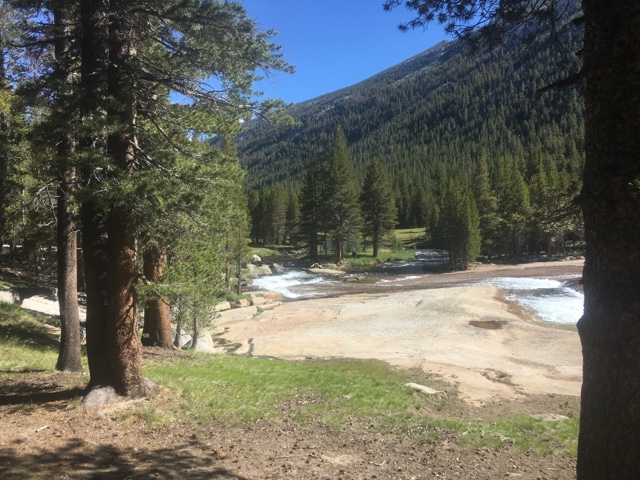 Waterslide over polished granite
The closer we got to Tuolumne Meadows the more day hikers, section hikers, and people in general we began to see. The trail was better maintained and all of the river crossings had proper bridges. No sketchy logs for the touristy type folks. I have encountered this before in Great Smoky National Park and Shenandoah National Park, but the other PCT hikers all commented on it. It just comes down to resources and the amount of people using the trails. I don't begrudge the National Park system. I think it is great that they put effort and money into making the wilderness more accessible to everyone. 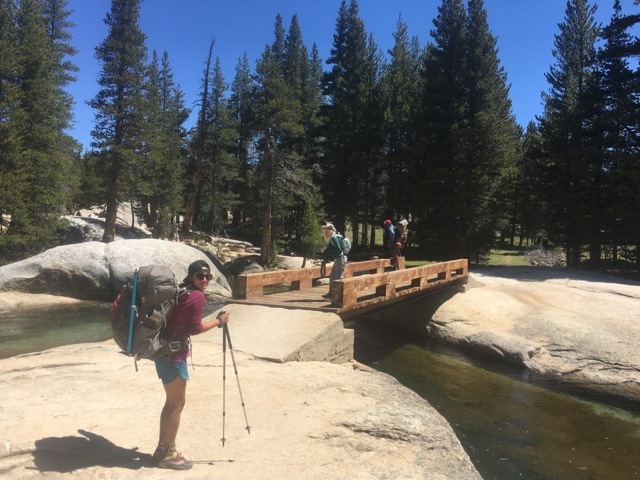 Beautiful bridge
With the help of nine and a half easy miles we made it into town early. We walked to the camp store to grab a beer, for H&S, and a soda for me. As I was walking around the tiny store I spotted a familiar face. The hiking community is a small and tight knit community. As in all communities there are celebrities and well know people. I have an idol/mentor/person that I admire and she was standing a few feet away from me. Wired, is a triple crowner plus many more miles and trails on top of that. She has one of the best hiking blogs out there. When I began to plot my Appalachian Trail adventure I had major doubts about hiking alone. It was through Wired's blog that I learned so much and gained the confidence to hike alone. We corresponded briefly before I began the PCT. I decided to go over and introduce myself and say hello. She was very kind and we talked about the trail and difficulties of blogging while on the trail. 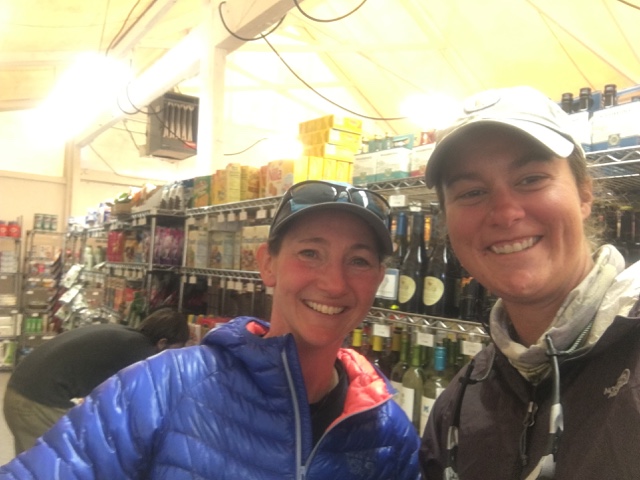 Wired and I
Good luck finishing the Sierra High Route and best wishes for the rest of your badass hikes this year! You should definitely check out her blog at: www.walkingwithwired.com
I spent the rest of the afternoon being spoiled by Sprinkles family. She has a very large family and I'm still trying to work out who is who. Her dad, Art, is a chef and owned his own Mexican restaurant. He brought us chips and salsa from work. Later in the day he cooked us an amazing feast. Art has four daughters and Sprinkles is the youngest. All of the sisters have children and at one point I think I counted twelve little human beings running around. It was a relaxing and normal human afternoon and evening. We even had s'mores by the campfire before bed!
The really good news of the day is Zuul managed to get us permits to hike Half Dome and down around in the valley. The bad news is my knee is more than just angry, it is downright furious. I can barely walk right now. I'm hoping I can sleep it off and tomorrow I'll magically be healed. Stay tuned for the results(spoiler alert: That outcome is very doubtful)

To the complaint, 'There are no people in these photographs,' I respond, There are always two people: the photographer and the viewer.