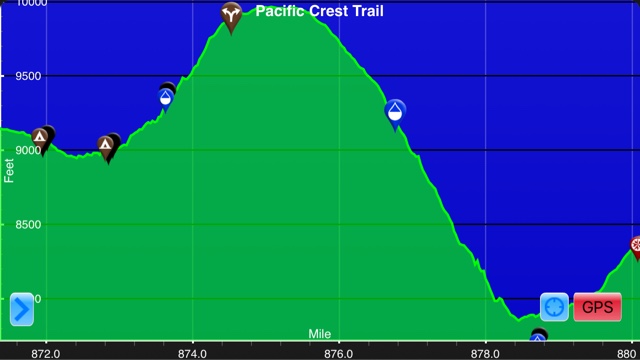 July the fourth is one of my favorite holidays. So it only makes since that I would try to make it into town to celebrate. Vermillion Valley Resort(VVR) is like a lot of "towns" on the PCT. It is a campground with a general store and restaurant. I set myself up last night so I could get in early. I enjoyed camping by myself for the first time in almost nine hundred miles. I was up and hiking early. Without anybody to talk to in the morning I was up and had camp broken down quickly. If I had realized that I had a major river crossing first thing in the morning I would have hiked a little farther and done it last night. It is never fun to walk through ice cold water first thing in the morning.
The current was really strong and I had to struggle against it to make my way across. I was pretty cold for awhile after that.
For the next four and a half miles the trail went uphill so I warmed up quickly. It was a nice uphill climb too. I passed by several JMT hikers. I just love flying past them. I have my trail legs and they don't. I always get a kick when they try to keep up with me and they can't. It probably helps that my pack weight is half of theirs. Seriously some of these people must be carrying close to sixty pounds.
The hike up the mountain was entirely below tree line. I enjoy sections like this because it reminds me of the Appalachian Trail. I hiked past Aspen trees, through muddy trail, and never really got a great view. Other than the Aspens it was exactly like the AT. 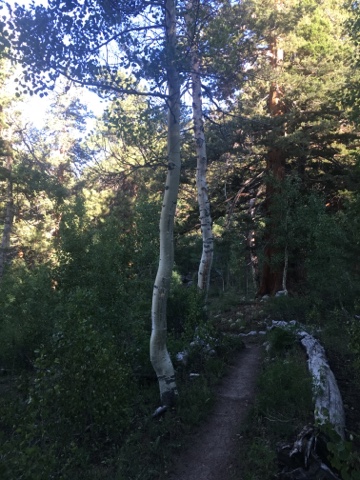 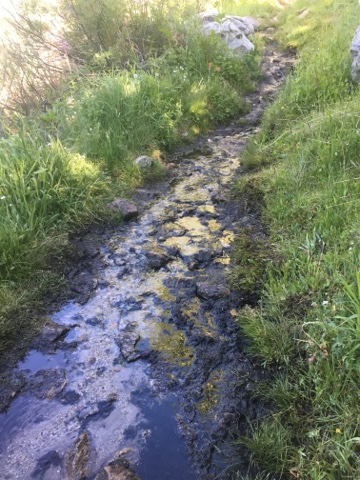 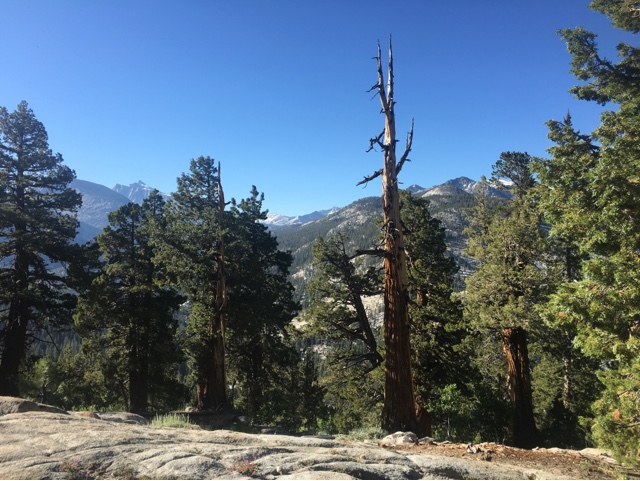 Barely a view
Once I made it to the top the trail lost some serious elevation. On the way down I had to fight my way through a ton of mosquitos. There were so many of them I didn't want to stop and eat a snack so I tried to eat as I hiked. As I tried to get a bar out of my hip belt pouch I managed to lose a really cool rock that I picked up on Muir Pass. It went flying out and tumbled down the mountain. I was devastated. I looked really hard for the perfect rock to send home. I had planned on writing a John Muir quote on it and adding it to my "cool places" rock collection.
I made really good time today. I hiked the 8.6 miles in less than three hours. I hiked really hard so that I could make it to Lake Edison before the last morning ferry to VVR left. I missed it by three minutes. I was hoping that another ferry would come so I didn't have to hike five miles around the lake. I waited by the lake for almost two hours. Another ferry never came. I really wanted a cheeseburger and a beer so I decided to hike the five miles. The next guaranteed ferry across the lake was at 4:45 and there was no way I was going to wait for almost five hours. 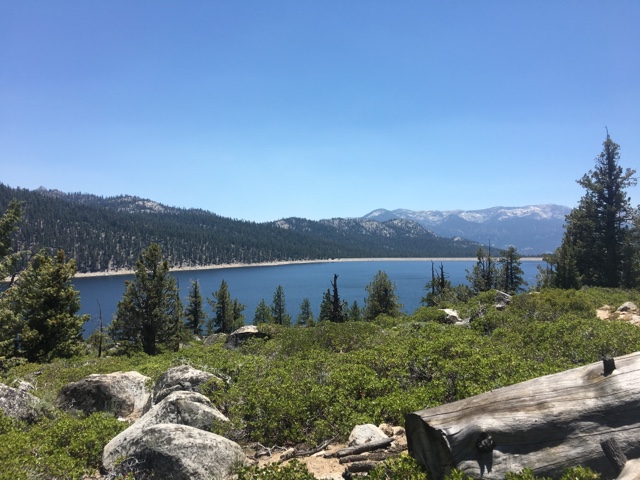 Lake Thomas A. Edison
It was a grueling hike around the lake. It had a lot of ups and downs through exposed terrain. I didn't take any water with me, because I'm not always very smart, and soon I became dehydrated. All I could think of was that cheeseburger and beer. I made it to the resort in just under two hours. I was greeted by a mass of old friends who happened to be extremely intoxicated. Hugs and fist bumbs greeted me as I walked over to them. Before I knew it, I had an ice cold beer in my hands. Unfortunately, the resort did not have cheeseburgers and wasn't serving food of any kind until six o'clock. Oh well, at least the beer was cold. I really enjoy this particular group of hikers. They call themselves a dirty, but funny name that I don't feel is appropriate to share on the blog. If you're really interested email me and I'll tell you. The group consists of Juicy, Mixed Tape, Lost and Found, Skippy, Canary, Joules, Caveman, Smiles, Fearless, Shortcut, and Sonic Mailman. They have been trying to recruit me into the group for quite awhile. Since the Wolf Pack is spread out right now I will probably take them up on the offer. They are hiking an alternate route into the next town and missing PCT miles. I don't miss miles, so I won't be hiking with them right away. We plan on meeting up in Mammoth Lakes in three days. I'll hike with them until we get into Toulumne Meadows, which is the start of Yosemite. I'm thinking of taking a few days off from the PCT there. I would like to try to get a day pass to hike Half Dome in Yosemite Valley. I would also like to see Yosemite Falls while I'm in the area. It will take a lot of planning to make this work, but I'm hopeful that I can swing it.
I was planning on resupplying in the general store. I was told they had a good selection, but could be cleaned out if a lot of hikers made it there before me. I took my chances and it did not turn out well. The store was practically empty. I only needed two and a half days of food, but that wasn't going to happen. Luckily the unnamed group came to my rescue. Everyone had something to donate and I was able to piece together a three day resupply. Most places where hikers congregate have a hiker box. Hiker boxes are kind of like the leave a penny take a penny jar. We leave food and gear that is unwanted and other hikers take what they need. A lot of times you can resupply fully from the hiker boxes in town. VVR is extremely shady. They raid the hiker box and resell the items in the store. They were selling a used deodorant for $2.25. Mustard and mayo packets were being sold for fifty cents. It was unbelievable. I have never seen anything like it before. We were outraged when we figured out what they were doing. Eventually word spread and instead of putting stuff in the hiker box people were trading with each other directly.
VVR was extremely expensive. Six dollars for a six minute shower. Three dollars for a ramen. Two dollars for a soda. There was no cell service in the area so they were charging two dollars per minute to use the phone. I didn't bother doing laundry or taking a shower. I figured I could wait two more days until I reach Mammoth Lakes. When they finally began serving dinner everyone lined up quickly to order. Hikers kept asking for burgers so they decided to serve that for dinner. Everyone's was way over cooked and the fries were almost inedible. To make matters worse the burger and fry combo cost seventeen dollars. A milkshake was seven dollars. I almost choked when I got my bill. If you ever hike the PCT I would recommend not eating in the restaurant. It was not worth the money. The resort was nice, for a campground, but you will spend way more than it is worth.
I was able to set up my tent for free next to the general store. People stayed up way too late drinking and partying. I finally had to put in my earplugs around ten thirty. I'm not sure if that makes me an old lady or a serious hiker. Maybe I'm a little of both. Tomorrow I will sleep in and take my time leaving. I will not do the hike around the lake again though. When I leave it will be on the ferry, which of course costs a lot of money, but it will totally be worth it.
"The second day of July, 1776, will be the most memorable epoch in the history of America. I am apt to believe that it will be celebrated by succeeding generations as the great anniversary festival. It ought to be commemorated as the day of deliverance, by solemn acts of devotion to God Almighty. It ought to be solemnized with pomp and parade, with shows, games, sports, guns, bells, bonfires, and illuminations, from one end of this continent to the other, from this time forward forever more."
- John Adams...a couple days off
Posted by Yoda at 12:49 AM