Day 72- Going Up And Going Down 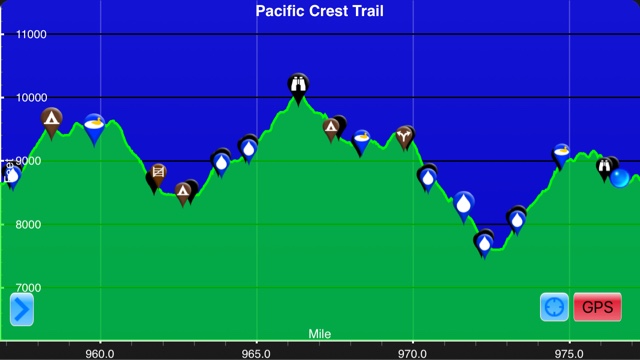 Total elevation gain/loss +5211/-5685 ft
Yogi's book, which is my guidebook for the trail, has this section listed as one of the physically hardest of the entire trail. After today I am inclined to believe her. I also think that I am better prepared than your average PCT hiker. Today was similar to the Appalachian Trail, so mentally I did ok. I hiked a lot of steep uphills, only to go right back downhill. Within the first mile of my hike I gained nearly one thousand feet of elevation. The first half a mile was extremely steep, but at least there were a lot of switchbacks. About halfway through the first climb I came across a small pond. Since there was zero wind the surface was like glass and the distant mountains and trees were reflected on its surface. I took a second to snap a picture and quickly moved on. Yogi's book also warned that this is the worst section for mosquitos. Once again she wasn't lying. I was constantly swarmed the entire day. It made for quite a few miserable breaks. 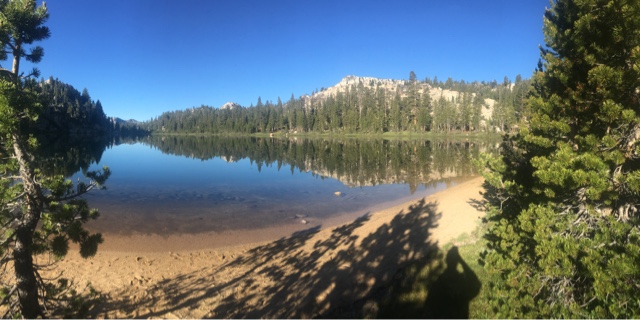 Reflections
Shortly after gaining one thousand feet of elevation the trail went descended over one thousand feet. I was more than a little worried about how my knee would respond, so I went very slow. Surprisingly, it only bothered me a little bit. Once I made it down to the bottom I stopped for a quick snack break. I also took the opportunity to stretch out my IT(Iliotibial) band. I'm really trying to stay on top of the problem, but I hate stretching. Although I can't argue with the results. My knee feels almost back to normal(knock on wood). Next to shin splints, IT band issues are one of the top reasons that people quit the trail. 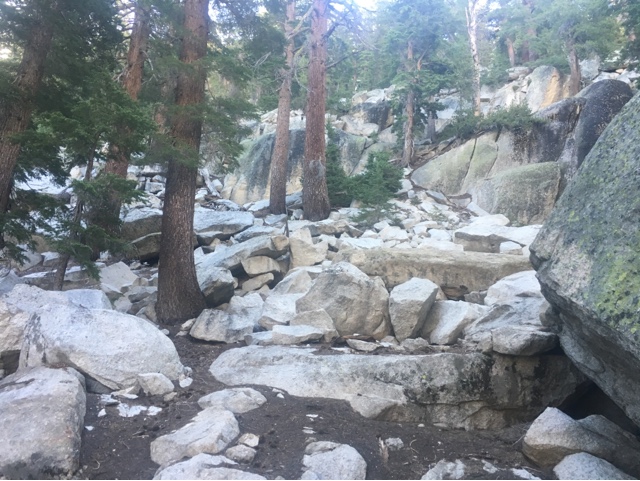 Terrain on my way down
After dumping so much elevation it was time to go back uphill. This part of the hike was about 1,600' over two miles. I went from hiking through a lush forest and meadow to hiking through a very exposed area. The hike up to Benson Pass was grueling. Not only was it steep and exposed, but I hiked in a cloud of mosquitos. I figured that when I got to the top I would get a reprieve from them. That was not the case. If anything they were worse at the top. I was surprised because I was above ten thousand feet. Who knew that mosquitos could thrive at such an elevation. I was going to have a snack at the top, but I was going mad with all of the blood suckers. At one point I had at least one hundred on my shirt. The Deet I had applied kept them from landing on exposed flesh, but just having them all over was maddening. 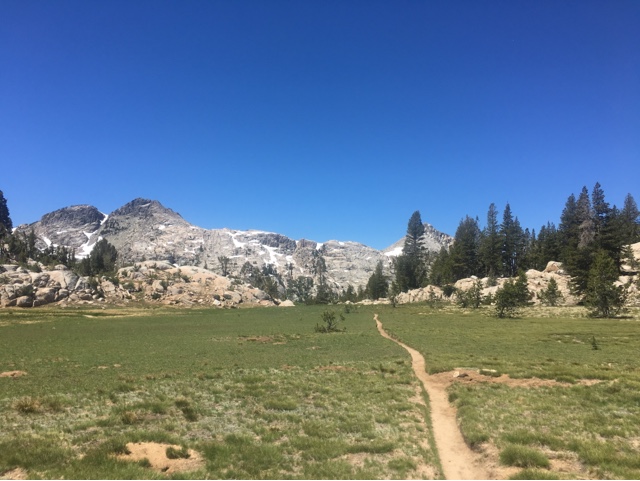 Open meadow just before Benson Pass
I hurried down the pass as quickly as possible. I didn't want to go too fast and irritate my knee, but I also didn't want to get eaten alive. It was a delicate balance. After hiking downhill for two miles I made it to Smedberg Lake. I was hoping to eat lunch there, but I assumed the mosquitos would be worse than at the pass. Imagine my surprise when they were almost nonexistent at the lake. Luckily the wind had picked up. It was too chilly for a swim, but the breeze kept most of the mosquitos at bay. 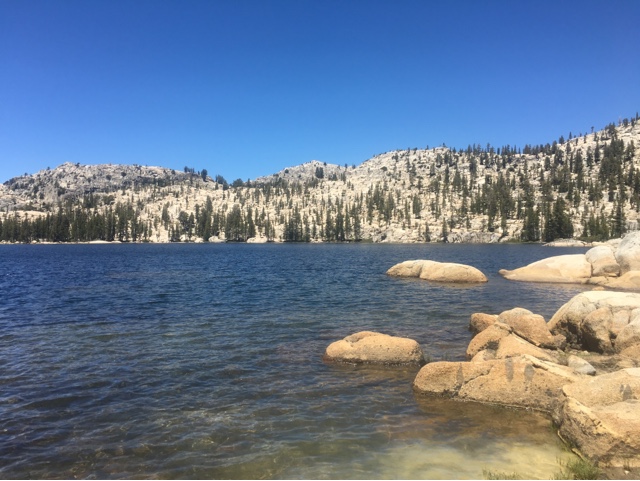 Smedberg Lake
You can just see the large cloud of pollen floating on the surface of the lake in the bottom right hand corner
I was hoping to hike another nine or ten miles, but I still had roughly 1,600' of elevation loss followed by 1,600' of elevation gain to do. The hike down from the lake was interesting. Some parts were steep and other parts were very rocky. Once again I took my time. It seemed to take forever before I made it all the way down. My reward for safely making it down was three sketchy river crossings. The only dry way across was using logs. I'm really getting good at log crossings. I guess I've done them enough that I'm pretty confident in my abilities. I feel like I've conquered a major fear. I'm still really slow going across compared to most of my peers, but just the fact that I can make it across pleases me.
The final climb of the day, Seavey Pass, just about killed me. I was completely spent by the time I made it to the base of the pass. I probably would have camped there, but with all of the water crossing it was crazy ridiculous with mosquitos. I had no choice but to move forward. I plodded my way up the pass slowly. I thought I had reached the top, but it was a false summit. I still had one more small climb to make it to the top. Seavey Pass is notable because it has several small lakes around its peak. I snapped a few pictures before running away from the mosquitos. When I made it to camp two miles later I looked at the pictures I had taken. One of them was definitely a winner. 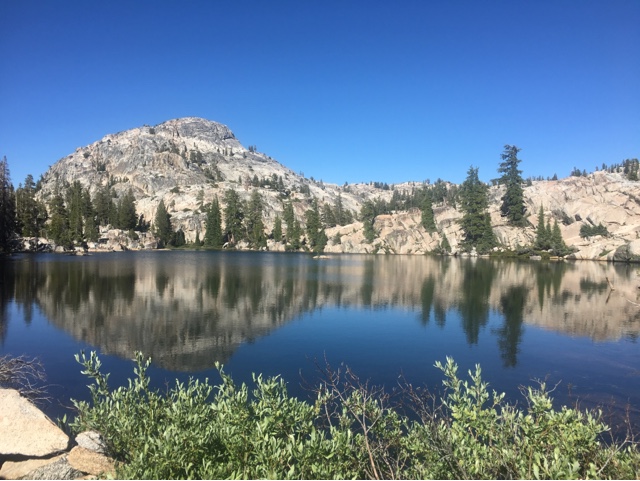 Didn't even notice the reflection when I took the picture
I found a nice campsite away from any water sources. I thought this would help keep the mosquitos away. I was partly correct. They aren't horrible here, but they are still around. I put on some layers and set up camp as quickly as I could. Someone at the backpackers camp in Tuolumne Meadows gave me a Mountain House meal. It is only the second time I've had one on this trip. While it was rehydrating I sat inside my tent and sewed up a new hole that had appeared in my shirt. I also sewed up a hole in my gaiter and in my sock. By the time I had finished dinner was ready. I scarfed it down as quickly as possible.
Tomorrow promises to be another difficult day, but hopefully not as hard as today. I did some stretching after dinner and I hope my knee does as well tomorrow as it did today.
"Keep all special thoughts and memories for lifetimes to come. Share these keepsakes with others to inspire hope and build from the past, which can bridge to the future".
-Mattie Stepanek
Posted by Yoda at 1:56 PM