July 11, 2016
Yosemite Valley
As I predicted last night, I was not magically healed this morning. I had to make the very difficult decision of skipping Half Dome. I'm really disappointed about not hiking it, but I know it is the right decision. I still have a thru hike to finish and I need to focus on that. Half Dome has been there for millions of years and it will be around for me to hike some other time. I decided to see Yosemite Valley like a normal tourist and just walk around and take in the sights.
I slept in a little bit before joining Sprinkles's family for breakfast. Her family put together an amazing spread. Her dad cooked chorizo breakfast burritos. What a treat to have a home cooked meal. He made enough to feed an entire army of thru hikers, which was no easy task. 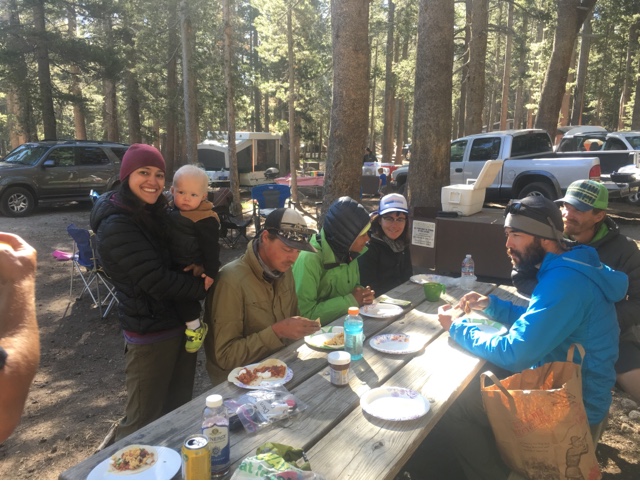 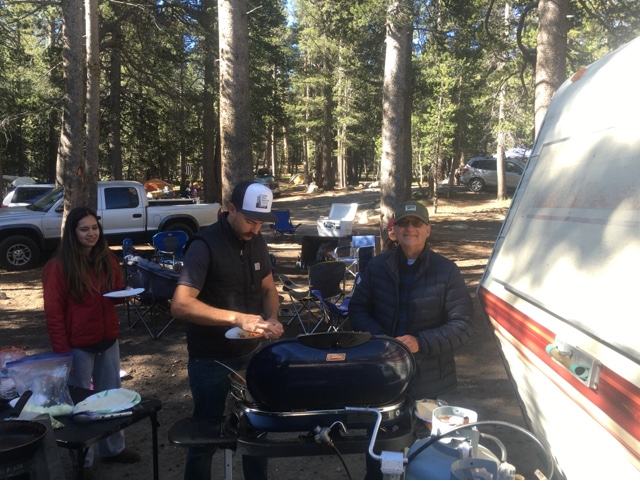 Papa Sprinkles hard at work
After breakfast I rushed to pack a day bag and headed off to the camp store to catch the shuttle into the valley. It was a two and a half hour bus ride. I was joined by Action Jackson, Glide, Shaka, Risky Biscuit, Roadrunner, and Hammer. Once we made it into Yosemite we went out for an early lunch. It was the first time in a long while that I had cell phone service so I updated my blog. Thank for your patience through this section. I'm writing my blog every day, but due to the lack of cell service it has been a long stretch since I could post anything. I'm hoping that after South Lake Tahoe in one hundred and fifty miles the cell service reception will be better.
After lunch I broke away from the group to do my own thing. I really wanted to hike up to Upper Yosemite Falls, but I didn't have enough time and I was supposed to be taking it easy on my knee. I settled for the short hike to Lower Yosemite Falls. It was an amazing sight, but very overwhelming. I felt like I was at Disney Land. There were tourists everywhere. 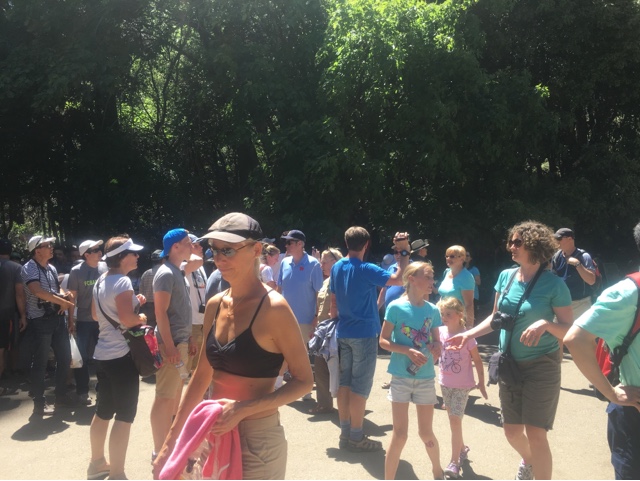 Sensory Overload
Even with the huge crowd of people I was awed by Yosemite Falls. I managed to find a quiet place away from the crowd to take in the view. I discovered that John Muir had a cabin in this location. He could see the falls from this cabin. 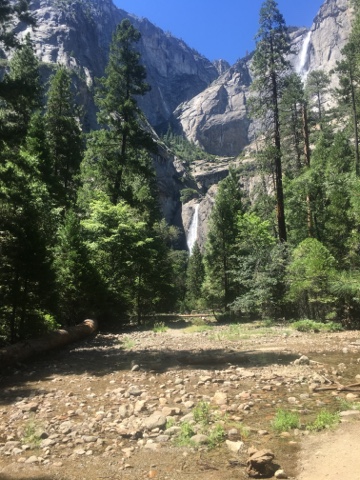 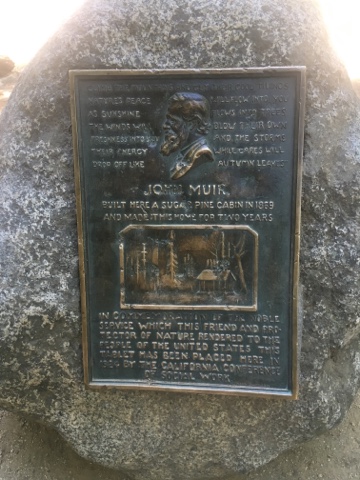 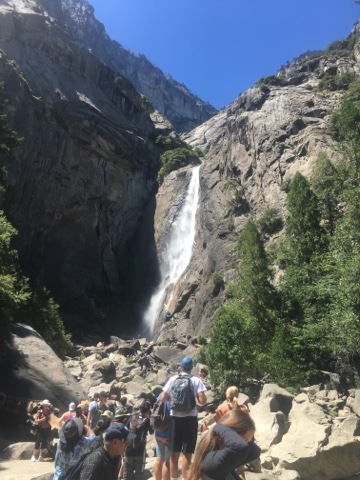 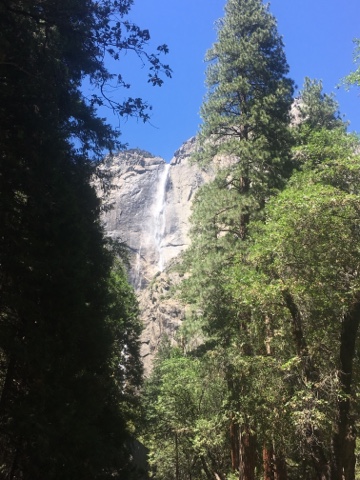 Upper Yosemite Falls
I didn't get to see as much as I wanted to. The bus back to Tuolumne Meadows left at five o'clock. I really wanted to see El Capitan, but I just didn't have the time. I spent awhile just walking around the Yosemite Falls area. I did get to see Half Dome. It was really cool. The moon was visible right next to it. 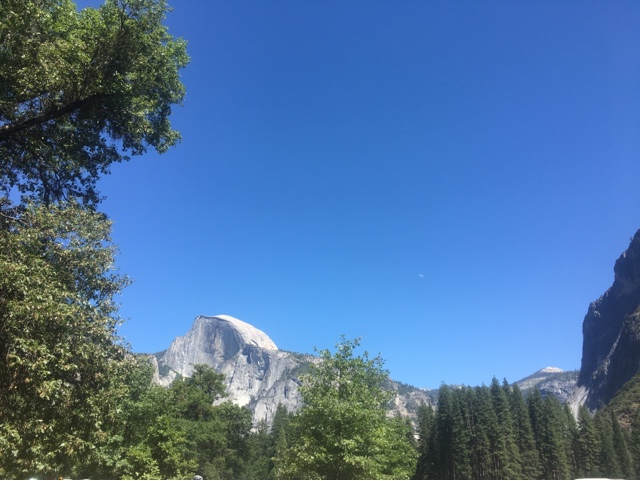 Half Dome
Before I knew it, it was time to board the bus back to Tuolumne Meadows. I hope to return to Yosemite Valley one day and see everything else and to hike Half Dome. Once I made it back to the campground I received a nice surprise. Evac and U-Turn finally caught back up to us! We had a great evening catching up with one another. Unfortunately, they are taking a zero day tomorrow and I have to hike out. I want to make it to Tahoe for my birthday and they want to go in to Yosemite Valley. I'll probably be moving slow for a few days to let my knee continue to heal so hopefully they will catch up to me. 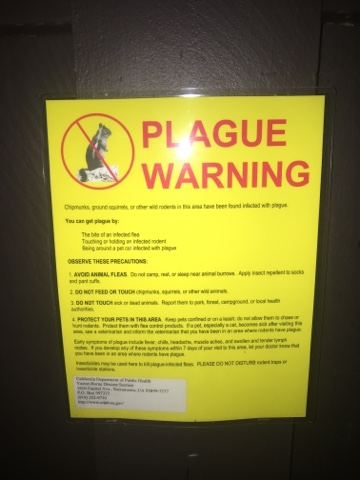 Apparently the Plague is still a thing- signs around the campground
Since I was hiking out in the morning I went to bed before everyone else. I should say I tried to go to bed. The other hikers in the backpackers campground decided to have a raging party until almost midnight. I am pretty frustrated by the lack of courtesy some people show on the trail. It seems like every time we camp at a trail angels house or at a campground people act like this. I don't get it(actually I do get it...there is alcohol at most of these places). I'm just glad that I carry ear plugs with me. I'm carrying extra food for this next stretch in case my knee limits how many miles I can hike. I don't want to be forced to hike big mile days because I don't have enough to eat. I'm also hoping I'll be miraculously cured in the morning. Wish me luck!
"No pain that we suffer, no trial that we experience is wasted. It ministers to our education, to the development of such qualities as patience, faith, fortitude and humility. All that we suffer and all that we endure, especially when we endure it patiently, builds up our characters, purifies our hearts, expands our souls, and makes us more tender and charitable, more worthy to be called the children of God . . . and it is through sorrow and suffering, toil and tribulation, that we gain the education that we come here to acquire and which will make us more like our Father and Mother in heaven."
-Orson F. Whitney
Posted by Yoda at 1:48 PM