Day 60- And Another One Bites The Dust 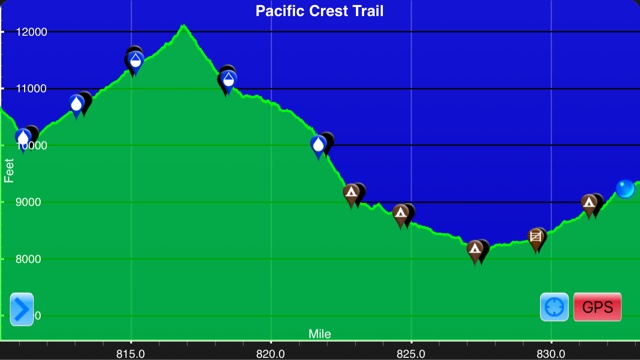 Today I crossed off major pass number four, Mather Pass. Mather Pass is named after Stephen Mather(1867-1930), a retired industrialist millionaire who was appointed as first director of the National Park Service in 1917. Like all of the other passes that I've done so far, the hike up was beautiful. After leaving camp I had seven or eight water crossings. The first couple had routes across where I stayed dry, but eventually my luck ran out. When it came time to cross the, Kings River, I had to take my socks and shoes off and put on my Luna sandals. It was pretty chilly out and the water was ice cold. The current wasn't very strong, but the water was deep. It came up to my mid thigh. 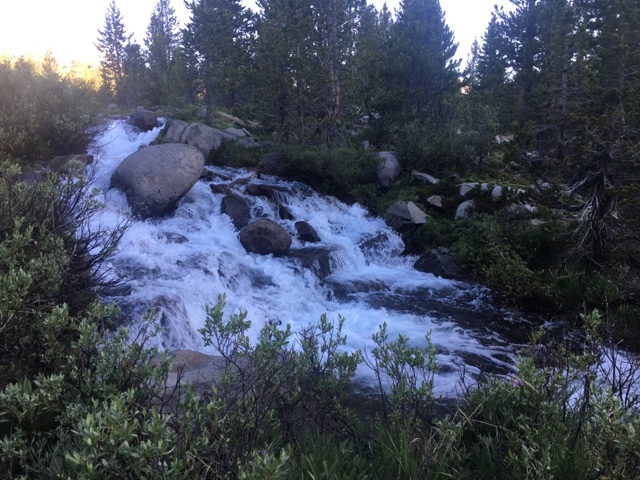 Kings River
Within half of a mile I had to cross the south fork of the Kings River. I decided to just hike in my sandals for the half mile. I actually liked hiking in them. They were comfortable and gripped the wet trail very well. 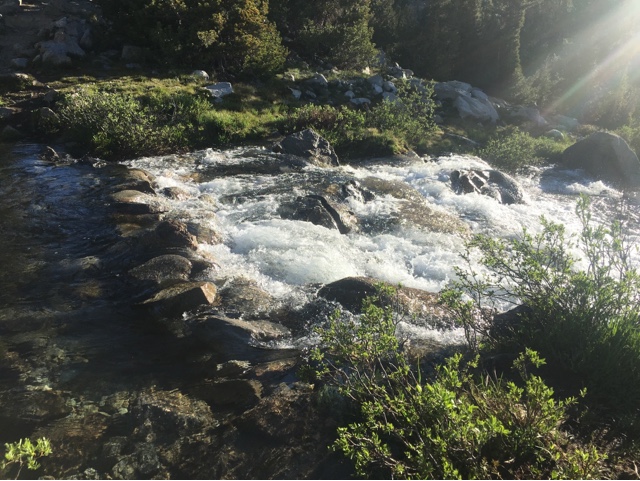 South Fork Kings River
I found a spot in the sun and put my socks and shoes back on. I enjoyed the challenge of finding a dry route across the remaining crossings. A few days ago I hated using logs to cross. Now that I'm used to it and have faith in my abilities it doesn't bother me. 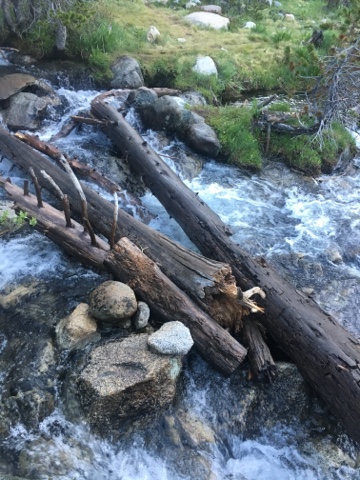 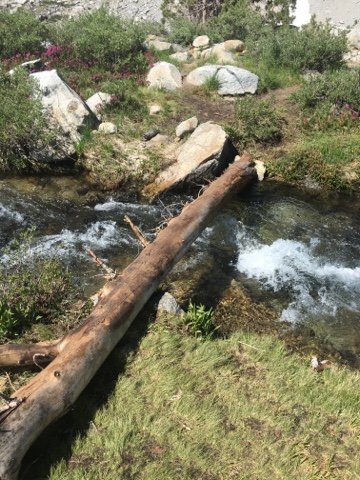 I'll take anything to have a dry crossing
Supposedly Mather Pass ranks as one of the most fear inducing passes because of its steep headwall. I had zero problems with it. The climb up was fun and it wasn't too challenging. 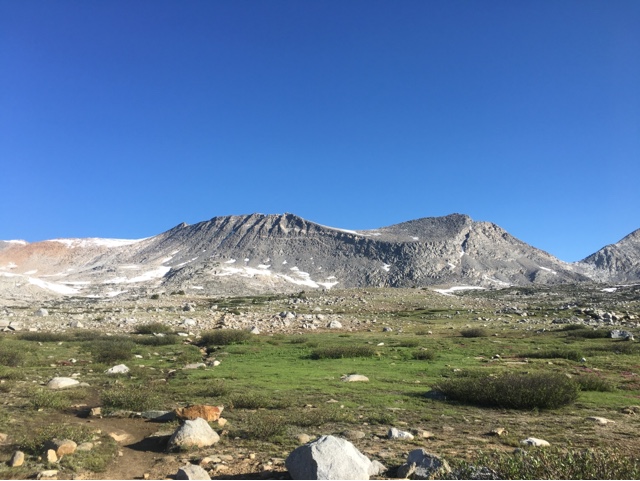 Meadow before the pass 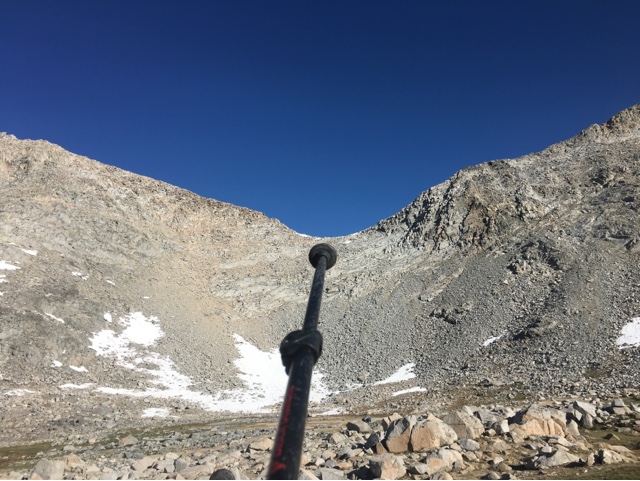 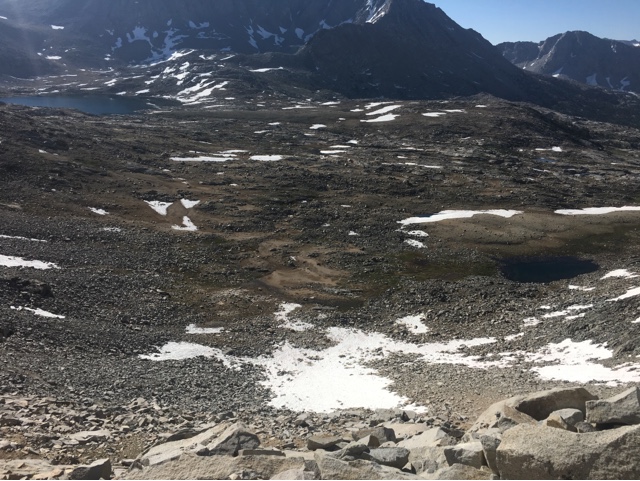 Looking back down from the halfway point 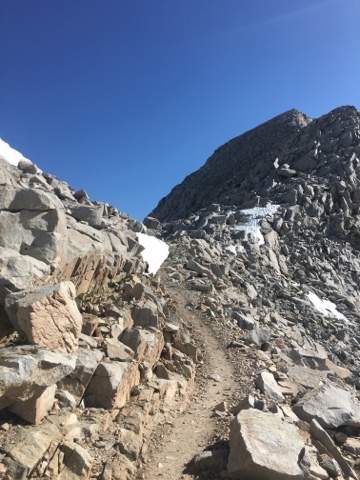 Almost there
I was the first person to reach the top. It was nice to have the moment to myself for a change. I passed three people on the way up so the moment was short lived. I love going over these passes. You work really hard to get to the top and then are rewarded with grandiose views. 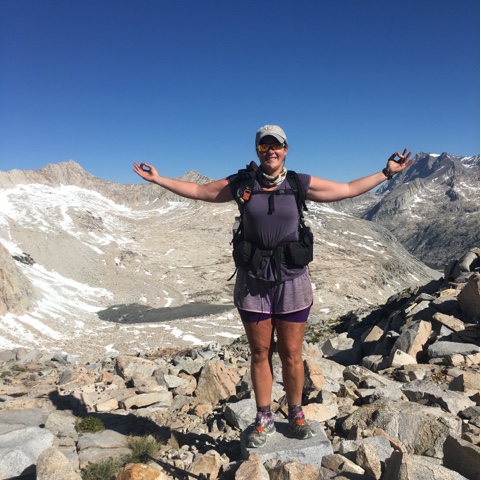 Feeling good
I didn't linger too long at the top. Since it was early in the morning it was still chilly out. As soon as I headed down the north face I encountered snow. I decided that since I was going to all of the trouble to carry microspikes I might as well use them. They are an amazing invention. I practically ran down the mountain. I was confident that every step I took would be safe. I almost wish there was more snow on these passes so I had an excuse to use them more. 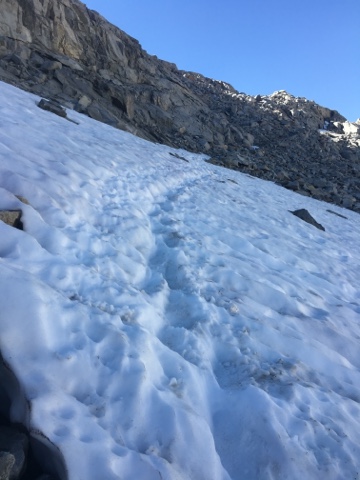 Lots of sections like this on the way down 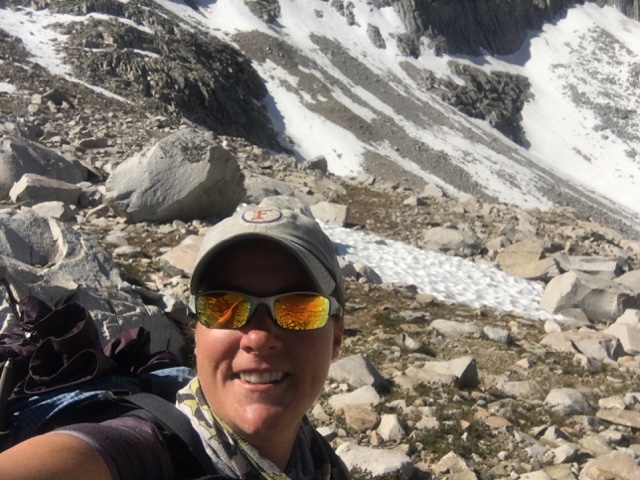 Feeling very good about myself
Once I finished going down Mather Pass the snow went away, but the downhill did not. I would spend the next twelve miles going down. Overall it was very gradual and a nice hike. I walked next to a lake, through an amazing canyon, and followed a raging river. 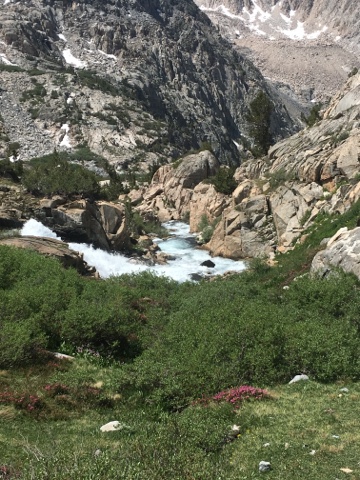 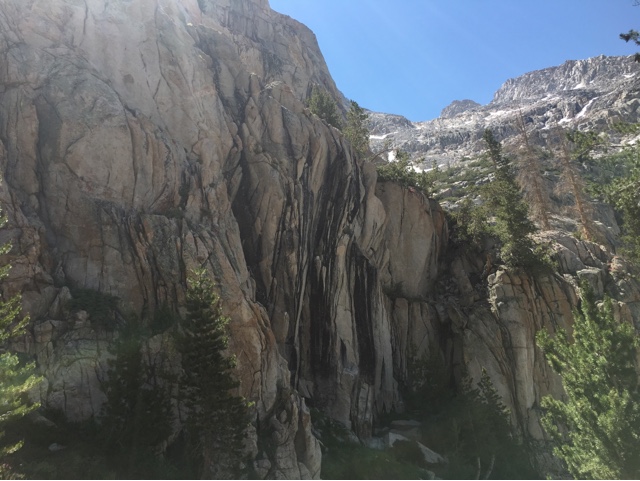 Trippy canyon
I crossed numerous creeks, streams, and rivers. I tried to keep count, but there were just too many. I did a great job with my hydration and nutrition today. I was able to keep up a really fast pace and never really hit a wall. Usually all of my afternoon miles are slow and a struggle, but today I felt great. I made it into camp before five o'clock. I was the first person to arrive at camp, which was great because I got to choose the best tentsite. I had enough time to soak my feet and to rinse out some of my clothes too. As I was getting ready to start dinner Outro came strolling in. After Outro a deer decided to join us. This deer has been following me around for the last few miles. It isn't skittish at all. I was able to walk within five feet of it. 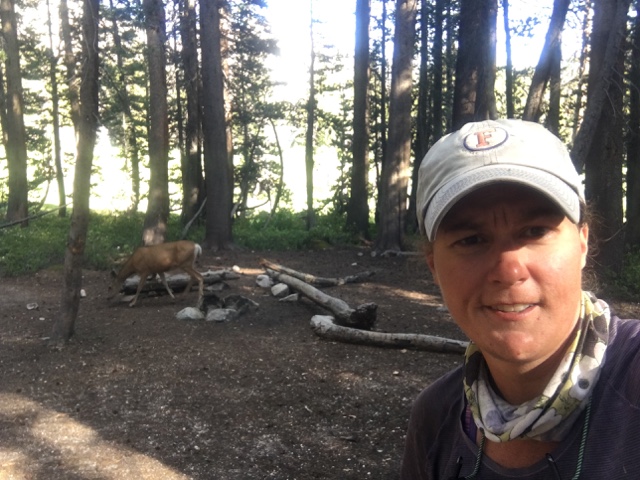 Deer selfie
I first noticed it two miles before camp. I took a short break to pee and check my maps. When I looked up it was right next to me. When I started hiking again I could see it to the left of the trail tailing me. Kind of cool and super strange all wrapped into one. As more people came into camp the deer eventually went away. As I'm writing this blog post from inside my tent I can hear it walking around through camp. I'm hoping that is a good sign that there won't be any bears around here.
Tomorrow I will tackle the last of the high mountain passes, Muir Pass. I'm excited to see what new challenges the Sierra will have for me, but I will miss the views that the passes allow.
"Few places in this world are more dangerous than home. Fear not, therefore, to try the mountain passes. They will kill care, save you from deadly apathy, set you free, and call forth every faculty into vigorous, enthusiastic action."
- John Muir, The Mountains of California
Posted by Yoda at 12:23 AM