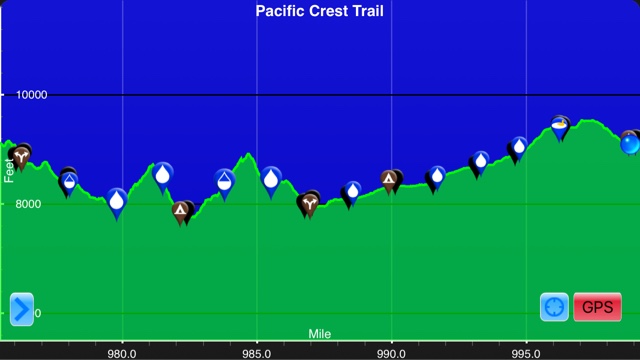 Total Elevation Gain/Loss +3.926/3,627 Feet
I had myself convinced that the mosquitos could not get any worse. Yesterday was an all time low for dealing with them. Today was even worse. I wasn't able to take a proper break all day long. The only time I stopped hiking was to filter water or to go pee. Anytime I stopped for even a second I was covered head to toe in mosquitos. The strongest bug repellent available, 100% Deet, hardly deters them. It only works until it dries into your skin, which doesn't take long at all. Ok, enough complaining about the mosquitos! Let me tell you about my day.
I left camp around six thirty. The first three miles were all downhill. My knee felt OK. I'm beginning to think that it is not an IT band issue. I had surgery to repair my ACL, MCL, and meniscus in 1999
and since then my knee has always had issues. I think I just over did it going into Mammoth and it took awhile for it to settle down. At the end of the downhill I had a super sketchy river crossing to deal with. I made it across with no problems though. 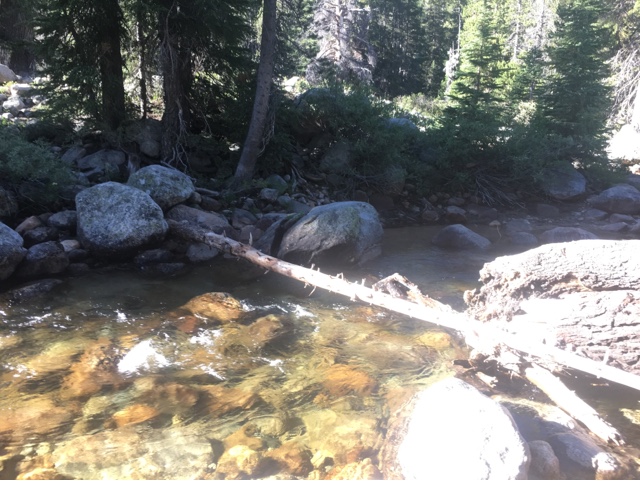 Skinny, knobby, wobbly log
Once I was across the river the trail went steeply uphill. I huffed and puffed my way up.  After all of the elevation change yesterday my legs were still tired today. 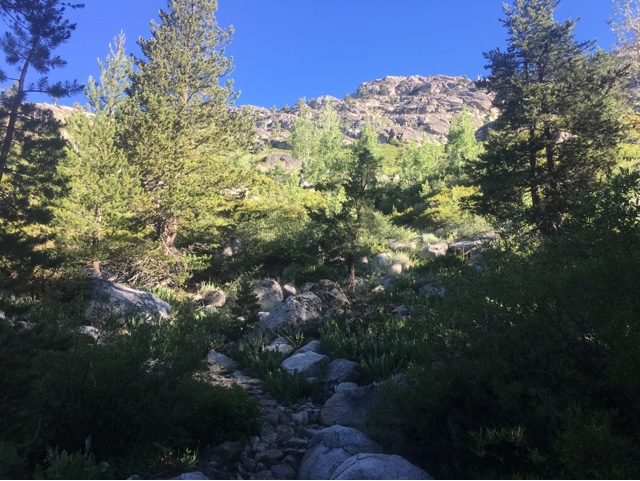 A wall of granite in front of me
At the top of the climb the trail was completely washed out. Instead of a trail I had a small stream to walk through and around. My rock hopping skills are getting very good. 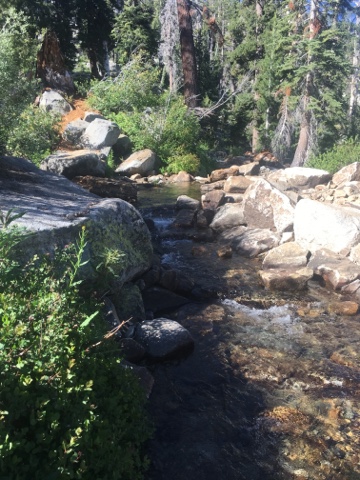 The trail
Once I made it through the slippery trail/stream I could see across the valley. I knew that once I made it down I had to immediately go back uphill. I passed a south bound hiker who warned me that it was very exposed and dry, so I carried a little extra water with me. I was glad that I did. It seemed to take forever to climb up to the ridge. There were a couple of false summits and no water in sight. I'm used to seeing water constantly. It was strange to go four miles without crossing any streams. I did come across one pond, but I was glad I didn't have to drink from it. It was full of pollen, scum, and mosquitos. 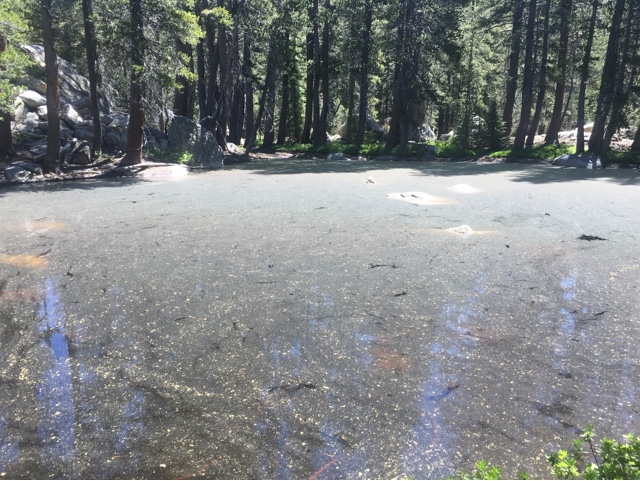 Yuck
At the top of the climb I didn't even get a view. I went immediately back down. About halfway down I had another difficult stream crossing. I should have just put my sandals on, but the mosquitos made that an undesirable proposition. I decided to risk walking over four skinny, shaky logs. The worst that could happen is I would get my feet wet. 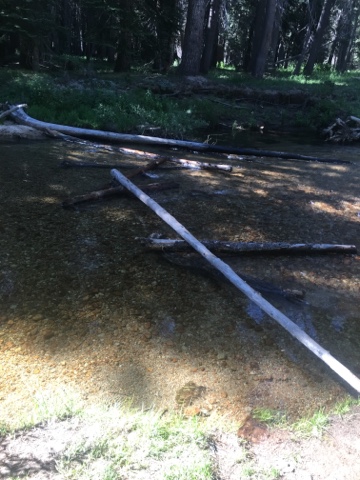 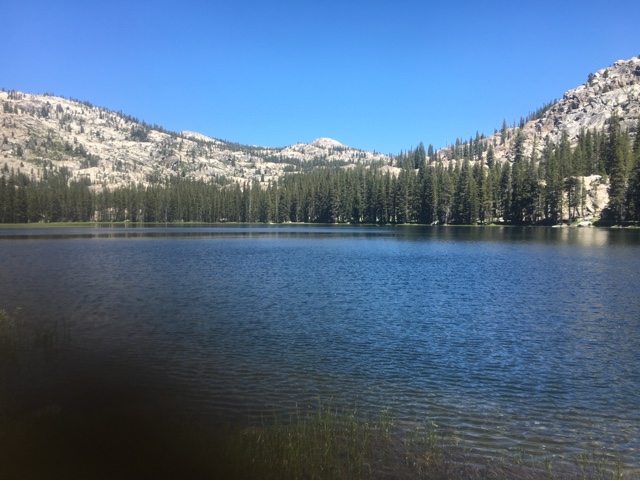 Wilma Lake
The next six miles were relatively flat and I made great time. The only issue I had was it was very exposed. There wasn't a lot of shade. I was drinking a ton of water, but I started to feel dehydrated. I decided to stop and mix up some Gatorade. I am so in tune with my body that I could tell that my electrolytes were out of whack. That is one of the cool things about thru-hiking. We  ask our bodies to do extraordinary tasks and when anything is off, we know immediately. I don't drink Gatorade very often because it tends to make me more thirsty and it occasionally gives me heartburn. Today it fixed me right up. I immediately felt better. 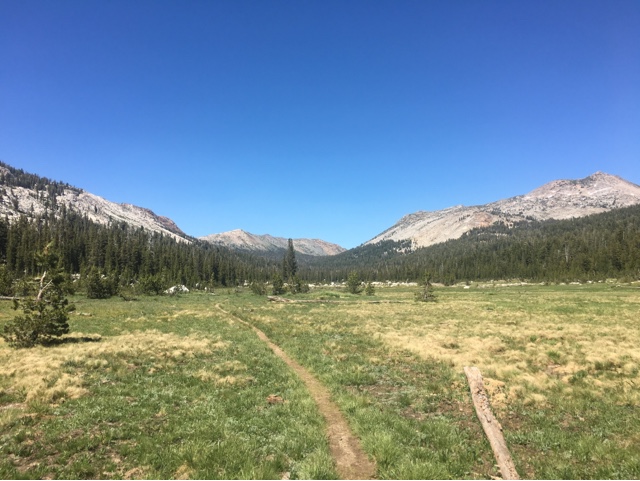 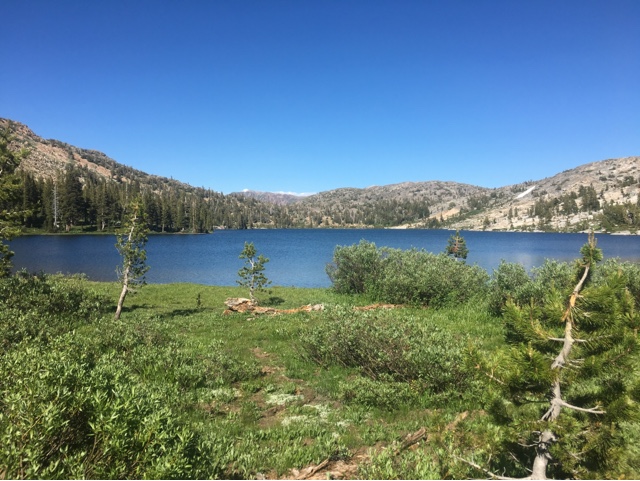 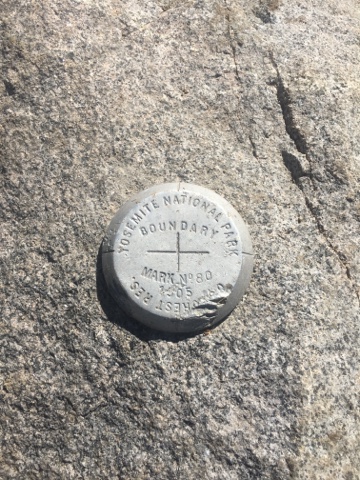 Northern boundary marker for Yosemite
Dorothy Lake was also the point where I hit twenty miles for the day. I started to look for a place to camp. I passed up a few good sites for no good reason. I think I was trying to hit the 1,000 mile mark, but my legs and knees weren't cooperating and I decided to stop before I hurt myself again. Unfortunately, the place where I stopped was close to several streams, creeks, ponds, and lakes. The mosquitos ate me alive. I back tracked one tenth of a mile trying to get away from the worst of them. It kind of helped, but it wasn't an ideal location to set up an non-freestanding tent. As long as it doesn't get too windy tonight I should be ok. I quickly cooked and ate dinner and got into my tent before the worst of the blood suckers came out to play. As it was, dinner was not an enjoyable event. I shoveled food into my mouth without really tasting it. Some days it is all about the calories!
I'm on schedule to make it into S. Lake Tahoe on July 21, the day before my birthday. 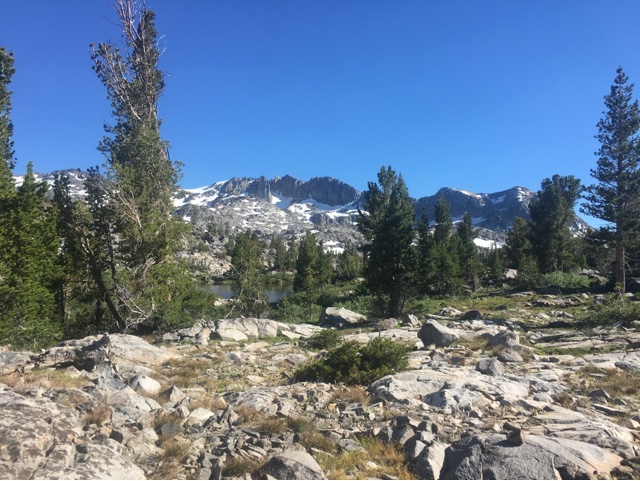 Looking back into Yosemite
“If you think you are too small to make a difference, try sleeping with a mosquito.”
Dalai Lama XIV
Posted by Yoda at 1:55 PM